The gameshow of the toy of the internet thing. 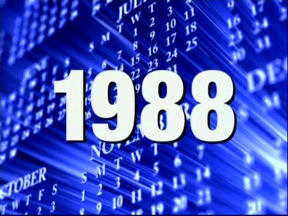 The opening is the story of how it all came about. 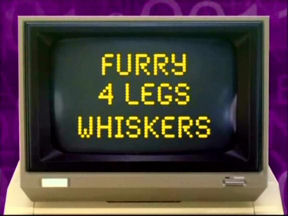 “In ’88, inventor Robin Burgener taught his computer twenty facts about his cat. Little did he know he created a monster, capable of learning and processing thousands of words by challenging humans to the classic game Twenty Questions. Named 20Q, it exploded online and became one of Mattel’s most popular toys. The supercomputer known as Mr Q (“Hello, humans!”) has beaten millions worldwide while procession billions of questions. Can anyone stop this machine? It’s time to play… 20Q!” 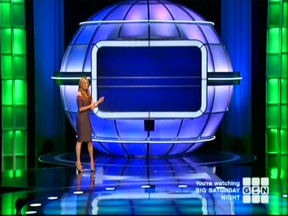 Here’s our host Cat Deeley off of SM:TV//Live and Mr Q himself who speaks with waveform graphics and the voice of comedian Hal Sparks.

And really, who else would you want voicing a computer than someone named Hal? 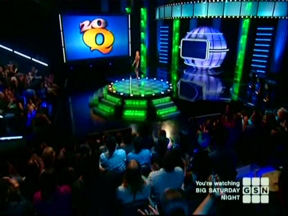 Wide shot of the set.

Someone in the audience is going to get the chance to face off against Mr Q at the end of the show to win $20,000.

But they have to earn the right to get there. 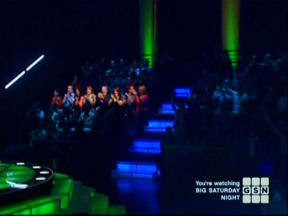 To be in with a chance you have to qualify. The lights in the studio flick on and off and eventually they’ll stop on a row of the audience.

They get to play the speed round. 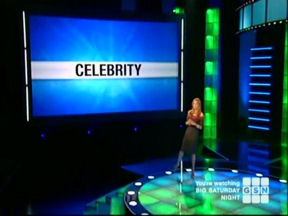 Three people are needed, so the game is played three times. Each time, the category comes up on the screen… 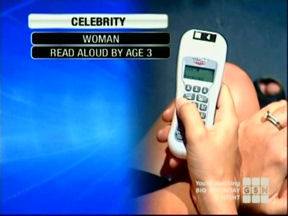 … and a number of clues are read out. When a player thinks they know the answer, they buzz in with the remote they’re supplied with.

(It’s Oprah Winfrey, by the way) 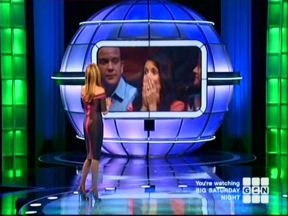 Mr Q alerts everyone when someone buzzes in and flashes their face on the screen.

If they’re correct then they get to come down on stage.

If they are incorrect, they’re eliminated from the question but they can still try again in later questions. 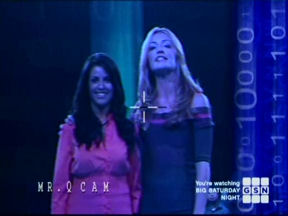 Qualifying contestants are bought on stage for a quick chat with Cat and an amusing quip from Mr Q. 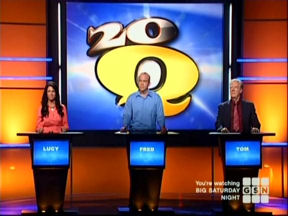 Three qualifying players found, it’s time for Mr Q’s Challenge. The winner wins $5,000 and will come back for the semi-final later in the show. 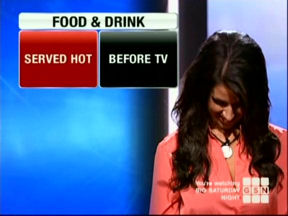 A category is given and two possible questions are offered. Players must select a question that offers a “yes” response, otherwise turn moves to the next contestant down the line. 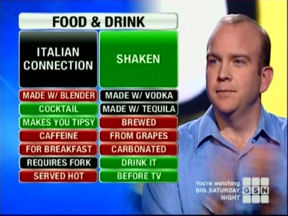 However, just because one answer is a no does not mean the other one in a pair is definitely a yes, which as you can see might come across as a bit cheap.

On your go you can ask a question yet to be answered (in black), you can ask for two new questions (but must ask one of them) or you can have a guess at the subject.

Noticeable is that the question stacks on offer are often quite leading and you can read the answer to an earlier unanswered question through the choices given. Also, one of the clues will be an absolute gimme – the answer here is Martini, so winning is probably more the luck of being in the right place at the right time than judgement. A wrong guess loses the turn. This gentlemen has won, though. 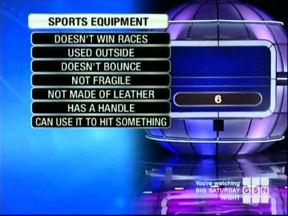 Before repeating the entire process again to find the other semi-finalist, Cat shows off Mr Q’s deductive reasoning skills.

After these clues, Mr Q is down to 6 possible answers, but with a 74% confidence guesses it’s a tennis racquet. And it is! 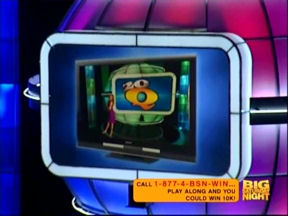 After the second semi-finalist is found, both are bought back to play for a massive telly and the right to play Mr Q for $20,000. 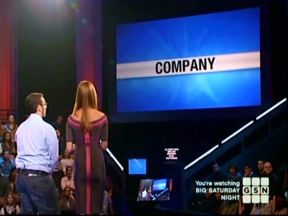 One player is sent off stage, the other will face a barrage of clues. The object is to guess the subject in as few clues as possible. 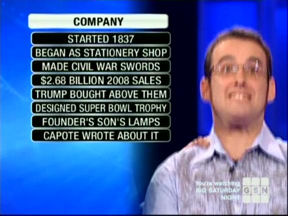 You are allowed a guess after each clue. This gentleman does it in eight.

The answer is Tiffany & Co. (Tiffany’s will do).

The other guy doesn’t get it after the eighth clue so this player gets to play against Mr Q. 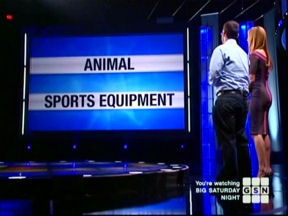 The player gets a choice of category. 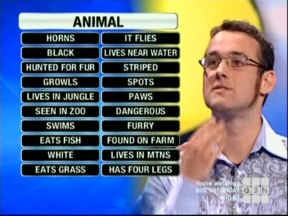 And then 20 questions comes up.

The player chooses which ones he’d like to answer. The questions turn green for “yes” and red for “no”. Simply, he must guess what the subject is before Mr Q is confident enough to go for it – they both get just one chance to make the guess, get it wrong and you lose. 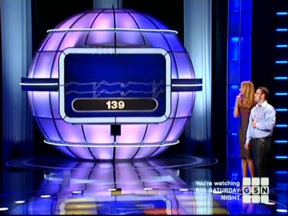 The advantage the contestant has got is that he’s the one who gets to choose all the questions. To keep the pressure on, Mr Q reveals how many different answers he has yet to eliminate.

The algorithm used to determine when Mr Q will buzz in is not given – probably when one of his answers reaches a certain level of confidence. 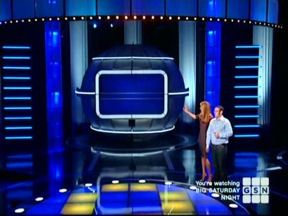 When it looks like the contestant is close to an answer, Cat puts Mr Q into sleep mode to that the contestant can talk his way through without Mr Q apparently gaining anything. 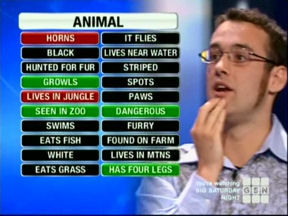 At this point he’s torn between lion and polar bear. “Although lions are the king of the jungle, they live on the plains”.

He decides to go for one more question – can they swim?

Yes, they can swim.

Mr Q reveals that polar bear was actually seventh on his list of guesses, the top one being wolverine.

Some of the music at this point is lifted directly from US Deal or No Deal. 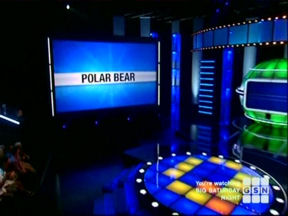 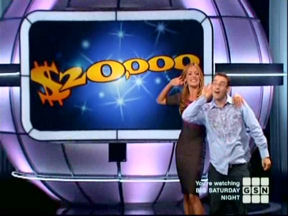 And Mr Q complains that he’ll never be able to show his monitor in public again.

This feature was originally written in 2009, the following comments were left in the comment box:

David:
Nice one Brig- too bad this was part of the disaster called BSN here- it’s a decent show..

A couple of points that you may not know-

The contestant gets to see both categories and the 20 questions for each forthe final round in advance so he can make the decision as to which one to play (this is in the disclaimer at the end of the show)..

If Mr Q takes a guess and is wrong, the contestant has one chance to guess the subject at that point to win, otherwise it’s a double defeat.

Brian Moore:
This isn’t Hal Sparks first time with game shows in any capacity, he was the host of Treasure Mall back in 1988 among other things.

Brig Bother:
Mmm, I had watched Survival of the Richest fairly recently.