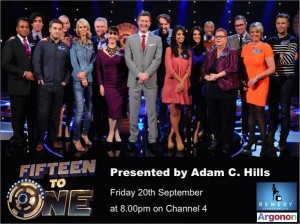 Well it’s finally here, Adam Hills hosts the return of the knockout quiz that puts fifteen contestants up against each other in a knockout quiz. In this one-off-with-a-view-to-a-series, those fifteen people are celebrities playing for charity, for Channel 4’s Eighties Weekend.

I expect the celebrity one to do OK this evening (it’s up against both Eastenders and Coronation Street so good scheduling there) and then when they decide to make it for the afternoons it’ll bomb.

36 thoughts on “Fifteen to One”