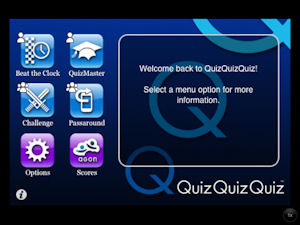 This is about as exciting as it ever looks

QuizQuizQuiz are quizzers and quiz setters of some repute – much of the team have done a lot of time on telly, and if you’ve played a pub quiz machine you’ll probably have encountered a QuizQuizQuiz quiz at some stage. I have lost a lot of money on those things, and that is why this app will be getting a poor review.

Not really of course! This is an app that boils down quizzes to its purest form – take a look at the screenshots, what you aren’t getting is a game of gameshow style flashy sets and exciting music. What you are getting is 6,000 multiple choice questions across a wide-ranging selection of categories and difficulties. 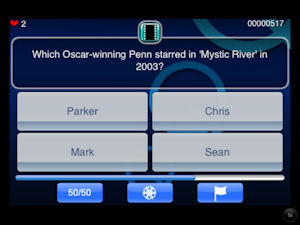 Indeed, if you’re looking for a ton of format variety you’ll be out of luck. The main modes have you either answering questions against the clock, or answering as many questions as you can with the help of three lifelines (50/50, freeze the clock, pass) before you get three answers wrong.  Points are gained for speed of response. Question level and time limits can be set before you play, and online leaderboards keep track of the main combinations.

There are two multiplayer modes, one where everyone gets the same question (Challenge) and one where everyone gets different questions in the same randomly chosen category (Passaround). Everyone gets three lives, last one standing wins with speed of response bonuses used to break ties. It works as well as can be expected, although it’s a big shame that you’re limited to choosing fairly similar looking pastel-based icons, when you could have dropped some of the eight-digit scores and let people put a name in instead. It’s also a shame that the questions are all timed, a resource like this would brilliantly handy to be able to use for quizzing at gatherings. 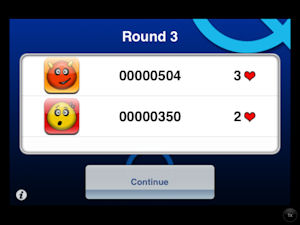 We're a bit better than the screenshot suggests.

To be honest, there’s not much more else to say really – if you’re looking for a cheap as chips app with a load of well written questions and little else but is good for quick five minute bursts then this is good value and comes highly recommended.