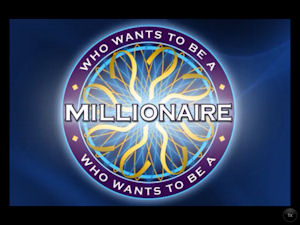 The app plays mainly like the show, although it’s a strange hybrid mixture of lots of different versions – it’s a fifteen question tree but it has the modern rave-y theme. The questions are also all timed, a bit like how it is on the telly now, but unlike any other version the app intends to emulate.

You answer questions to earn points (leaderboards are kept), beginning with a mandatory fastest finger. After that you make your way up the ladder, having chosen to play a regular or fast game, the fast game offering less time to think but more points for speedy responses.

The game basically plays like it does on the telly, you have your three lifelines (50:50 works as you’d think, Phone a Friend brings up a list of people and their interests you can call upon, Ask the Audience brings up a the bar charts albeit without percentages). 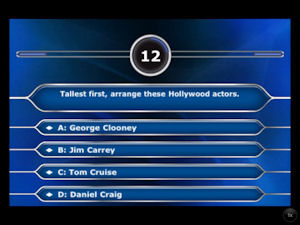 Unfortunately the question setting isn’t brilliant, fastest finger questions verge on the amazingly trivial, and the difficulties of the main stacks don’t seem quite right to be honest.

Whatsmore, little thought has been given to creating the stacks as a whole, and on many occasions you’ll get two questions not only of the same sort of category but the same sub category in the same set. This is frankly a bit lazy, how hard could it have been to attach some sort sub category tag to each question behind the scenes and then when the computer picks the questions out ignores the ones you’ve answered a question on already? You wouldn’t get two consecutive questions on formula one or Bond girls on television, you shouldn’t here either.

The graphics are similar to the ones used on the show (albeit blue rather than purple), but the use of music is very selective – you won’t get the thinking background music, you get the ‘DOO-doo-doo-doo’ of the lights going down, and you will get an increasingly irritating burst of the dance-theme between questions. 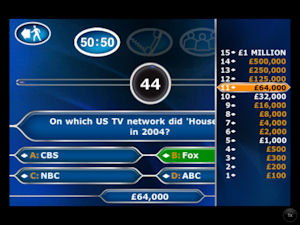 The game features 1,000 questions, I can’t say I’ve had any repeats yet. You can’t turn the clock off, which is fine if you’re me, but a look on the written comments suggests that it’s ultimately quite irritating and makes it more difficult to “be” a quizmaster.

It has the Millionaire branding and because of that it will probably do quite well and provided you don’t think too deeply about it you’ll get enjoyment out of it. But if you’re looking for a quiz app, alternatives exist that have lots more questions and have been better thought out for a lot less of the money.

One thought on “iPod: Who Wants to be a Millionaire?”