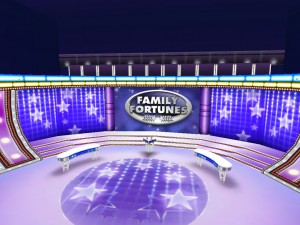 Well I think the first game of this I played sums up the quality quite well. It was something like “name a word that rhymes with ‘jumpy’, I put three different answers in and they were all correct, except in a twist nobody saw coming, the answers that went up on the board were different to the answers I put in. Er.

Sure it’s got the logo and it’s got the set (for reasons best known to Ludia, our version of the show appears to take place in front of the Acropolis). And it plays basically Family Fortunes (using the rules to All-Star Family Fortunes). However, here is a list of things it doesn’t have: Top answer: the theme tune (it has something that sounds as though it might be ours for the first few bars, but then goes elsewhere). Answer number two: Vernon Kay, instead we appear to have a rent-a-Northerner (the credits suggest it’s someone named Julian Casey) who carries little of Kay’s charm or authority – it’s easy to knock Kay, but you’ll be crying out for him after five minutes of this I guarantee. Answer number three is particularly well written questions – rather anodyne and surprisingly difficult to answer in the main, and in playtesting I came across “name things you put on a snowman” and both “carrot” and “a nose” are separate answers. I mean, come on. Answer number four is “a fifth family member”. Answer number six, and surprisingly low considering, is lack of proper “eh-errrr” noise except bafflingly in the Big Money round where it puts in a celebrity guest appearance. 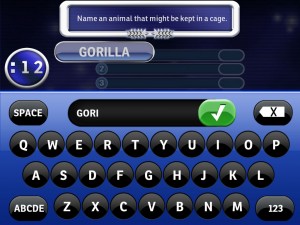 You have the choice of single player or two player. Single player is you facing off against one of twelve computer families, seemingly increasing in difficulty as you go along and each victory unlocking wardrobe elements (as head of family you get to dress yourself up from a fairly limited collection of clothes). Actually playing the game isn’t too awful if you can get past everything – you type your answers in but it will bring up predictions you can just tap on to save yourself filling the rest out (in fairness, the opening example is more of an exception than the rule, but it’s not a great first impression). The game follows the rules closely – spot prizes are avaliable, although they always seem to be £1,000. 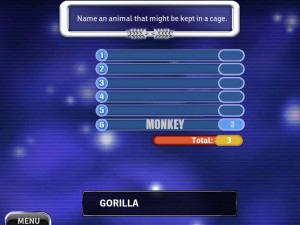 If you win the main game you get to go through to Big Money where you get to answer the same set of questions twice in your bid to win £10,000. Apparently £30k wins are possible, but it doesn’t tell you which ones of your answers are top ones, so thanks for that.

Two player mode works correctly in the confines of what you are given – you the iPad to buzz in on toss-up questions, winners go through to Big Money.

It’s difficult not to feel this is just a foreign version (most likely Family Feud) just reskinned. The core the app gets playing about right, but the writing (of the questions) and presentation feel so ‘off’ that it’s difficult to get much enjoyment out of it.