If you’re from the UK there’s a very reasonable chance you won’t know what Lingo is (although there was a Martin Daniels fronted version in the eighties) – Lingo is where words meet bingo – pairs of contestants try and work out mystery words using Mastermind style right position/wrong position logic, correctly worked out words earn points and a chance to pull numbered balls out of a hopper in an attempt to get a line on a bingo card – a Lingo – for a big bonus. It’s been a weekdaily hit around the world in various forms, and I’m surprised it’s not been tried here since. 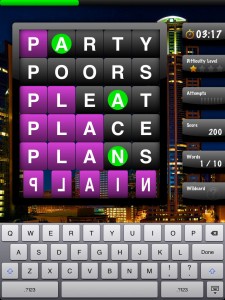 But I digress. It is worth pointing out that this isn’t an official app, and that it’s French developed. It doesn’t have the drawing balls out of a hopper bit. What it does do is play a rather good version of the word guessing game which you can customise to a large extent – want to play with 10 letter words and nine attempts to find it? Go right on ahead. Really hard words? Go for it. Prefer US English to British English? Knock yourself out. There are three modes – training is no strings attached play as many words as you want (and with some playing about, could be used as a sort of surrogate gameboard for a ‘proper’ game). Marathon is keep playing until you can’t get a word. Time Trial emulates the show’s end game – try and get as many words as you can within a time limit. Stats are tracked for all modes, and you can also track different players.

Input is via keyboard, you have the option of typing in every letter of every word yourself, or there’s a quick input offering which begins the cursor at the first empty space and requires you to type out the rest – you need to backspace if you want to change one of the existing letters. The rules play out the same as the show – the word you guess doesn’t have to fit the clues, but it must still be a word. You have the option of a “wildcard” letter on each word which fills in the first unknown space at a points penalty wich you can only use once per word (so if you were pretending to be the show you might have a problem if it goes back and forth more than once). It’s a shame there’s no option in the time trial mode to give the first letter and a random other one like they do on the telly.

Basically this is a difficult package to criticise because it does what it sets out to do quite well. Not bad at all.

One thought on “iPod: Wordbreaker HD [was Lingo HD]”