Dog Eat Dog, of course, was the UK all-round ability answer to Weakest Link where instead of questions, players were tested on their logic, maths, linguistic, perception and physical skills.

The American version tests physical ability and looking quite good in a swimsuit. It’s witless – but to it’s credit, it’s also quite good fun. US Dog Eat Dog ran for two series. It was originally shown on NBC, the references to Global are because this recording comes from the Canadian Global network. 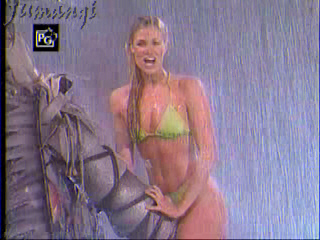 Here’s our host Brooke Burns who you may or may not remember from TV’s famous Baywatch in a swimsuit. Here she is, once again, in a swimsuit, introducing tonight’s show. Tonight, our contestants will have to battle a hurricane.

Most of the opening sequences we’ve seen seem to involve Brooke Burns in a swimsuit getting wet. What’s all that about, eh? 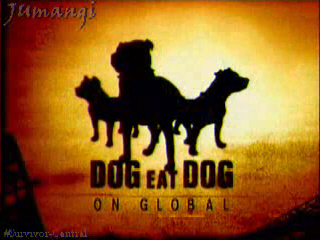 Our title sequence has.. some dogs in it.

You can ignore the “On Global” bit, that bit is added by the Canadian TV company. 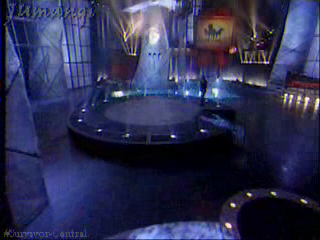 A swoop through the massive set. There’s a big swimming pool on the right just out of shot. Don’t worry though, you’ll be seeing lots of it. 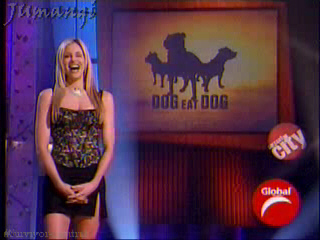 Brooke Burns, not in a swimming costume introducing the away day.

Burns is smiley, jolly, well meaning and irritating on occasion. And very Californian. 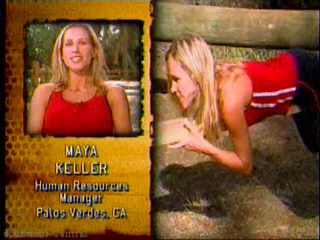 “Think of it as getting to know the enemy, or least what they choose to reveal”.

The contestants have a 24 hour period to assess each other’s skills as shown in this brief montage which also acts to give the players an introduction and a piece to camera. 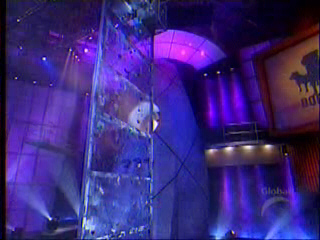 One of the differences between our version and their version is that the challenge is given a brief overview by Brooke beforehand but the actual proper details aren’t related to the viewer until after a contestant has been selected. We would assume that the contestants are briefed on how each challenge works before they vote, but we don’t know.

It’s time to choose the loser. 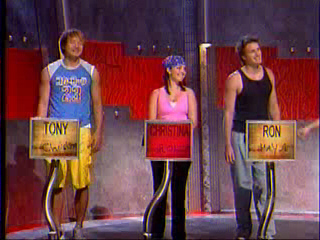 And Christina is our (un)lucky first contestant. We know this because her name has turned red, indicating she received the most votes.

Another difference with our version is that the contestants aren’t shown trash talking each other to camera whilst the vote happens, instead Burns occasionally asks one of the contestants why they voted the way they did.

Whilst Christina is getting hooked up (we see a montage), we hear her pre-recorded hopes and fears as a voiceover. 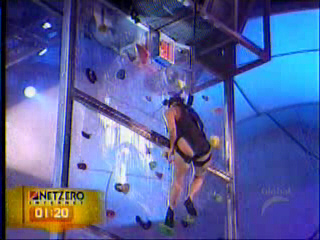 The challenge is quite simple. Within three minutes, she must climb up one side of the glass wall and retrieve a key from the box up the top. She must then get down as quickly as possible (i.e. jump), swim round the other side and then climb the other side of the wall. At the top is another box which she should insert her key into – if she can unlock the mechanism within the time, a torrent of water will splash down the other side. If she doesn’t do it within the time, then it will rain down on her side, washing her away to the dog pound (the US version of the “Losers Bench”). 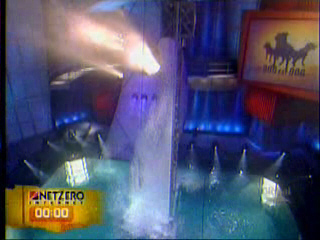 But after a strong start, she doesn’t get up the second side in time and gets a face full of water. 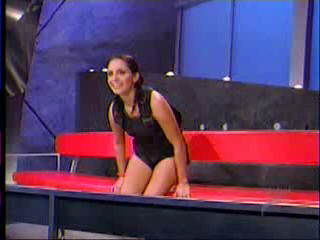 Most contestants are given an obigatory “see ya!” from Burns when they have to go to the pound although she forgets to give it to Christina.

There’s often some banter between losers and people still at home base at this point, specifically who is likely to go next. 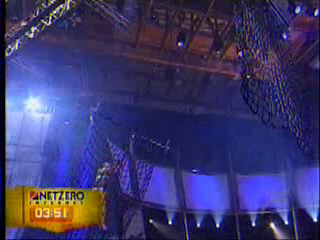 Game two is the cargo net swing. Within four minutes, the player must climb to the top of four cargo nets and release a flag. When this is done, the net swings down to meet the next one (shown here on the left) so she can keep climbing. 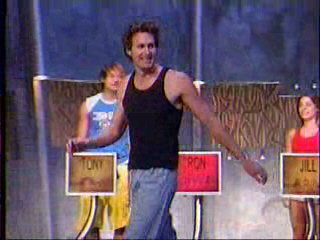 She manages it and sends Ron to the dog pound. “See ya!” 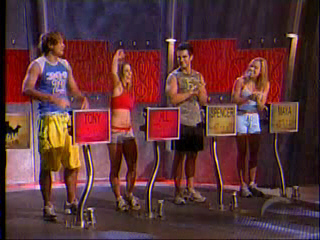 Game three involves putting some caps on some pipes in the pool. It’s a tie between Tony and Jill in the votes, and as Ron was the last person sent to the dog pound, he gets to choose who will be doing the challenge.

He chooses Jill on the basis that he would much rather see her take her clothes off. Although she’s hardly leaving much to the imagination here, is she? 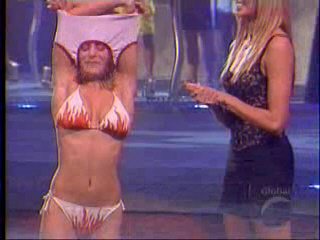 She obliges anyway. This is her swimsuit. 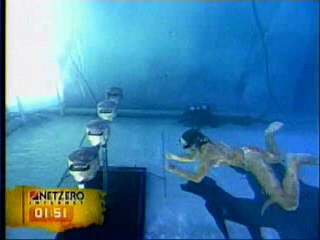 Within two minutes, she must plug four pipes each spewing water. 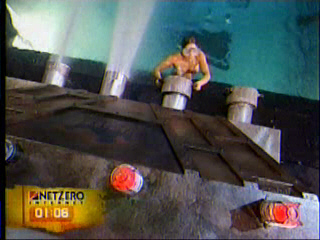 When the cap is on tight, a red light turns on above the spewing machine.

Sadly she has too much trouble with that third pipe. See ya! 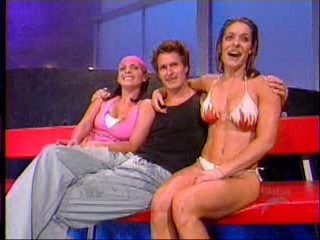 Ron is hating this, as you can imagine. 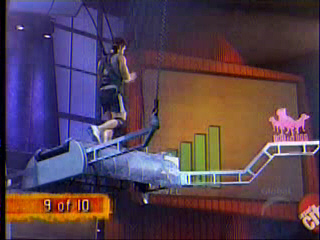 Round four is a Dog Eat Dog (and personal) favourite – Treadmill Trivia. Burns fires off questions at Spencer here and he has to get ten correct before he falls off into the water. However, every time he gets a question wrong, the treadmill speeds up a little. We can see he’s almost won here, and indeed he does.

The worst bit seems to be at the beginning when the contestant has to get used to the wobble of a mid-air floating treadmill. 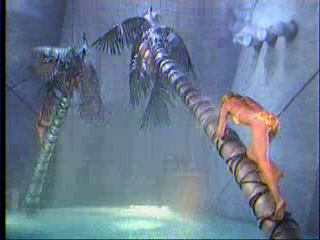 He sends Tony to the dog pound and now it’s time for the head to head. Do you remember the hurricane from earlier?

Well, our contestants have to climb the tree, get a coconut… 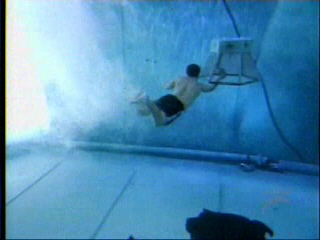 … and put it in the underwater basket. The first person to get three in their basket is tonight’s top dog.

They have to do this whilst a man-made tropical storm howls around them. 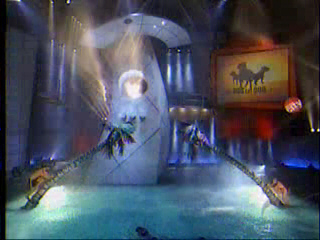 It’s two coconuts each and Spencer is ahead. He also has the better technique – he holds onto his coconut as he drops off the tree, whilst Maya picks the coconut, chucks it in the water and then has to go and retrieve it. 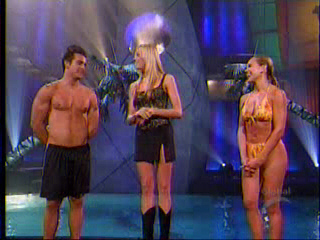 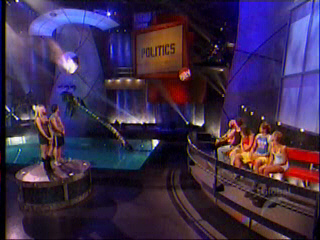 But not if the Dog Pound has anything to do with it.

This bit is similar to our endgame. A category appears on the Circuit City big screen, and Top Dog has to select one of the losers to answer a question on that category. If they get it wrong, Top Dog gets a point. If they get it right, they get a point. Whoever reaches three points first wins the $25,000.

The selected contestant doesn’t come down to meet them, they stand up and shuffle forward a bit.

The answer here, obviously, is Gorbechev and not, for example, Bin Laden. 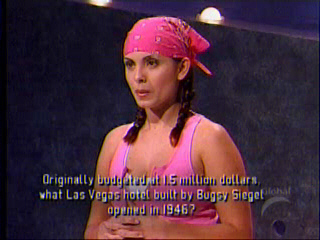 Christina gets a question on business. This might have been a mistake though, as she’s studying for a PhD at a school of business – something she managed to keep hidden at the away day.

She still gets it wrong though. 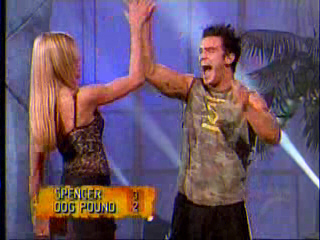 But despite pulling it back to two all, the dog pound aren’t good enough and Spencer wins trhe $25,000 all to himself. 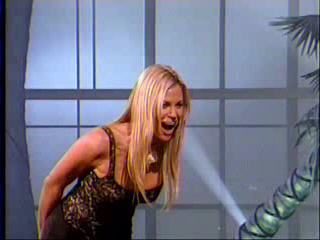 Spencer goes to commisorate the losers.

“Thanks for playing Dog Eat Dog!” 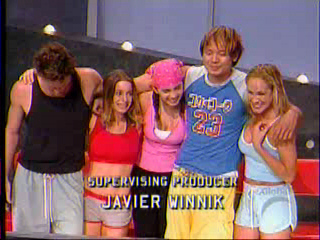 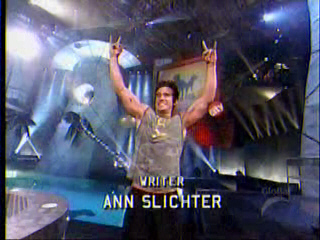 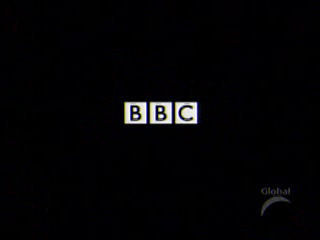 This article was originally written in 2005, a selection of the original comments left follow:

The UK version was excellent but this looks like a lot more fun to watch.

It gets quite tiring to watch more than one episode of, you begin to yearn for them to do more challenges which don’t involve that bloody swimming pool.

Obviously the US version decided against the more mental challenges than we had in the UK.

Here’s a Wikipedia entry on “Dog Eat Dog” which also mentions the US version.

There were some (I think three in total) episodes of said program that did not air on NBC. When they were repeated on GSN, they also included those episodes not broadcast on NBC.

Nice recreation of the show – they’ve put some money into the set, but they could have done with more variety in the games (preferably not all physical too, though anything where brawn is rewarding ought to help America in the fast food era). Two series is probably about right.

Brooke Burns is hot as hell!

I didn’t get to watch the show but I went to school with Spencer. He didn’t have guns like that back then!