(Brig’s Note: Necromunda is a Games Workshop skirmish game. Yes, I was one of those people who moved little men round a table when I was younger, I don’t do it anymore. Anyway, I wrote a scenario for it based on top action-adventure show Wanted. Weeks ago we found the document, so we present it for you now verbatim. Bear in mind that we never actually playtested it so we’re not entirely sure if it works or not. Still, though.)

Cruel arena type gameshows are very popular in the Underhive. The more brutal, the more popular the show. The best known of these is ‘The Lord of the Spire’ but there are others. This scenario is one such gameshow in which Gangers are pitted against each other in a mad race for creds and survival.

This scenario is designed for two or more gangs and an arbitrator is essential. Any gang can play Wanted because as with Lord of the Spire, this sort of show is entirely illegal anyway. 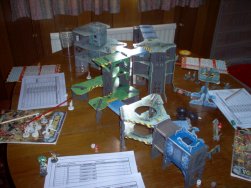 Gangs pay 50 creds to enter Wanted. Each player nominates two gang members to play, one will be used as a ‘Runner’ and the other as a ‘Tracker’. The Runners’ job is to evade enemy trackers whilst collecting creds. The Trackers’ job is to stop enemy runners from collecting creds and if possible eliminate them from the game. Once all players have nominated their entrants the Arbitrator randomly determines which Trackers are chasing which Runners (one tracker per runner). Obviously a tracker will not chase his own team mate.

Once this is decided the Arbitrator sets up the scenery and rolls 2D6 for every player in the game, this is the number of cred counters. The Arbitrator places these anywhere on the board as long as they are 4″ from any other counters.

The Arbitrator then chooses a side for the players to start on. The runners start up to 16 inches on to the board, the Trackers start on the very edge.

None of the players are allowed their normal weapons, instead they are given stun weapons. Runners have stun pistols and Trackers have stun rifles. The pistols are short ranged and innacurate where as the rifles are better at range.

Any model hit by a stun weapon suffers no wounds and instead cannot move in their next turn (place the model in a pinned position to show this). Trackers may only shoot their chosen runner but runners may shoot anyone they wish. Any runner hit by a stun weapon must discard one cred counter (if they have one), this is removed from the game permenantly.

Wanted is split into two parts: The Chase and The Hunt

Aim: Runners must try to collect as many cred counters as possible. Trackers must prevent their chosen runner from collecting cred counters.

Roll off to decide the order of play. In their turn a player moves their runner then their tracker, then shoots or fights combat with both. Then the next player does the same and so on for 15 turns. The trackers may not move or shoot for the first three turns, runners may not shoot each other or engage in hand-to-hand combat on the first turn.

To collect a counter a runner must end his movement on it. If a model does not shoot and is not in hand-to-hand combat it may pick up the counter. Every time a runner is stunned they must discard one counter, this is removed from the game.

If a runner engages another runner in hand-to-hand combat, they fight one round. After this attempt to swipe their opponents creds they turn round and get ready to carry on with the game. As they have no hand weapons (not even a knife) runners can never take other runners out of action, instead an injury roll of 1-4 is a flesh wound and a 5-6 is down. If a runner acquires enough flesh wounds to count as out of action they are out of the game and lose all the cred counters they had. A runner who goes down in hand-to-hand combat with another runner is not out of action. The winner of the combat takes one of the loser’s cred counters if the loser is only flesh wounded and all of their counters if they are taken down as their unconscious body is looted. If no-one is wounded, the runners give up and turn round to cary on running as normal, separate the models by two inches to represent this.

If a tracker engages a runner in hand-to-hand combat they fight as many rounds as are required. Again, no-one can go out of action but if a tracker takes a runner down the runner is out of the game and loses all their cred counters. If a runner takes a tracker down they leave him there and make the most of this chance to escape. In the unlikey event of a tracker going out of action due to flesh wounds place the model on its front. The tracker is out for the rest of ‘The Chase’ but is patched up and regains all WS and BS ready for ‘The Hunt’. This is not true of runners however who, as mentioned before, are out of the game if they lose all WS and BS. Note also that runners do not regain points lost due to flesh wounds for ‘The Hunt’ as they do not get a break.

Stunned models which are engaged hand-to-hand instantly lose and are taken down. Any models still in comabt at the end of 15 turns stop immediately. 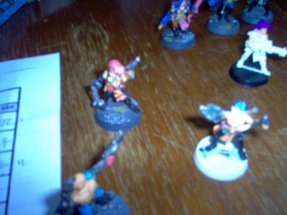 After 15 turns the chase ends and the hunt begins. All unclaimed counters are removed from the board and the models are left exactly where they are. The remaining runners must now try to hide from their trackers. Everyone left in the game leaves the room except for the Arbitrator and one player. The player has five turns of movement to find the runner the best hiding place possible. Once the player has decided on a hiding place the runner model is removed and the Arbitrator makes a note of where the runner is hiding. That player leaves and invites the next player into the room to do the same. This continues until all runners are hidden. Any runner which was down at the start of the hunt can crawl 2″ a turn and may roll for recovery every turn (1-4 = flesh wound, 5-6 = remains down).

Once all runners are hidden everyone comes back into the room and the arbitrator rolls a D6 and adds 8. This is the amount of turns the trackers have to locate their runner. Runners do not move any further for this entire part of the game. The trackers take it in turns to move then, at the end of their turn, roll a D6 and their Initiative doubled. This is their spotting distance. The Arbitrator measures this distance all around the tracker and tells him how many (if any) runners are within this radius, but not who or where. If a tracker is in a position where a runner would be in full view the Arbitrator announces whether or not it is the runner they are after. If it is not the right runner the tracker must look somewhere else.

Trackers who succeed in taking out their runner during ‘The Chase’ win 75 creds.

Trackers who succeed in taking out their runner during ‘The Hunt’ win 50 creds.

Runners win D6x15 creds for every counter they have at the end.

Any models which go out of action to multiple flesh wounds (remember, a model cannot go out of action normally) suffer no serious injuries. It is assumed they are patched up before they leave.

(In retrospect, that’s not very violent and brutal at all is it? Next week: Every Second Counts adapted for use with the Warhammer 40,000 game system. Or not.)