Well we’ve done the Spectrum, but what does the Commodore 64 offer us in terms of gameshow computer game conversions?

The answer is quite a lot, but this is rather more difficult to emulate than the humble Spectrum, I’m afraid. The emulator we’re using is WinVICE as it seems the most fully featured (although we can’t take screenshots dammit). We got most of the ROMs from www.C64.com. Be warned, loads of these files have demo-file introductions, pressing space will allow you to get on to the main game. 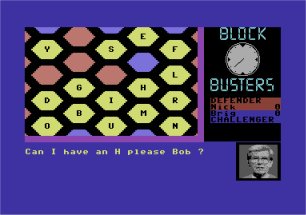 Blockbusters games seem to have a neat pedigree on the 8-bits. It’s a fairly simple game to emulate and it works well. Like many of the C64 games we’re featuiring here, you’ll notice that they’re much more colourful than the Spectrum versions, and if you play them you’ll discover the C64’s SID chip means you get rather better music. For these reasons, you may prefer to play the C64 versions, although we daresay that the Spectrum versions are usually faster, and their monochrome graphics are more detailed. Blockbusters has a rather neat snatch of the theme tune playing after each round and in my opinion also offers a more interesting set of questions to it’s Speccy counterpart. 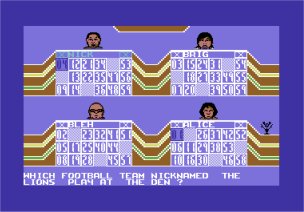 LISTEN TO THAT THEME TUNE! What a shame the bleeps are really annoying in game. The game’s quite slow to play however, and there’s no room for errors when inputting your answers. “Who is the most successful recording artist of all time?” Answer: “Paul Mc Cartney.” Cheers then. We also can’t help but feel that telling you how many spaces an answer to a question has is ultimately pointless when during multiple choice questions you list answers with different amounts of letters in. 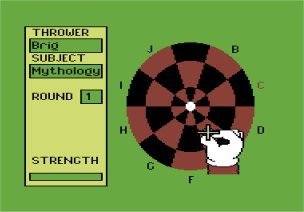 Controls: When you’re typing your name in, you can press either SHIFT key to change your level of difficulty (The first letter is capitalised for you, so don’t press shift for that purpose). F1 cycles through the categories on the category board, left and right SHIFT control the ain of your dart thrower, whilst holding down space increases the strength of your dart.

I suspect I’m going to be saying “ooh! That theme music!” quite a lot during this feature you know. You can select your difficulty, but all this seems to do is limit the time you’re allowed to type in your answers. It’s a bit slow. When I threw the dart into the wrong section, the question went all weird. Your dart throwing seems a lot less predictable than the Speccy version, but it’s far more difficult to get it where you want it to go. You only get four darts for Bully’s Prize Gamble. 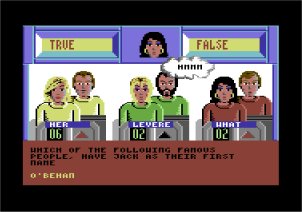 Controls: Left CONTROL and Z seem to be the cycle buttons, with Left SHIFT the select button. Left CONTROL and Z select the left and right answers. In the final round, CTRL, SHIFT and Z are the left, middle and right answers for the plyer playing on the left, for the player playing on the right, /, Right SHIFT and something else are the responses, but as we can’t work out the right response for the right player, this makes winning the end game very difficult indeed.

This plays a better game than the Spectrum version, no doubt about it. The questions are a little easier so it’s easier to rack up big scores, especially in the bonus rounds where happily it doesn’t require an exactly spelt answer for it to work properly. It’s a shame about that end game though, if anyone can work it out for us we’ll be massively pleased. 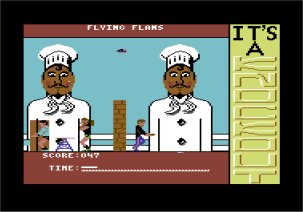 Controls: Q to get on and do stuff. Z and X for left and right. Q and A seem to serve as up and down controls. Space to bash those brontes. Tap Z and X alternately to run during the obstacle race with SPACE to jump.

This, unbelievably, actually plays a worse game than the Spectrum version, although it does look and sound nicer. The low depth of the Spectrum version seems like Mastermind in comparison in some events – all the flans land in the same place, for example.Appalling. 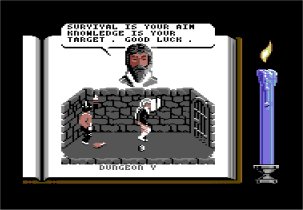 Controls: < is right, > is left, ‘ is up and / is down. Press any of these buttons to get into the game. Press letters to open up the VERB NOUN command, press space to cycle through and ENTER to confirm.

We have a theme tune which has nothing to do with the show at all, but is quite good in its own right. Sadly, your dungeoneer seems to have been weighed down with a thousand rocks and is the slowest thing in the entire world. The fact that the command list is still annoying, and the game is still esoteric, means it’s not really worth your time. 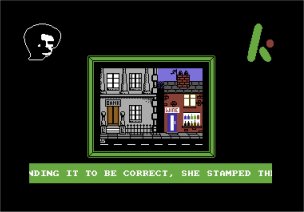 Controls: Most of what you need to know is included in the game. In the response round, you need to tap Q and A whilst you tap O and P to keep the bar in the blue section so you move forward, although we faild to work out the controls for the “guess which colour dominates the screens” bit. During the assault course, player one can control his character with QAZX, we failed to determine the controls for player two I’m afraid. During Intelligence, OP to move between the pieces, QA to rotate them, SPACE to put them in the grid (you must rotate them before putting them in).We can’t work out the buzzers either.

This is a shame. It’s an incredibly complicated set up, although I suppose it needs to be, some of the rounds work well and some do not. Sometimes this is because of the magic of imperfect emulation, at other times it’s just bad programming of the original. In this case, we reckon the problem here is down to imperfect emulation. Still, if you want to have a go anyway, you should be aware that in the first round, the idea is to put the numbers into sequencial order, and most other things are explained in the controls section. 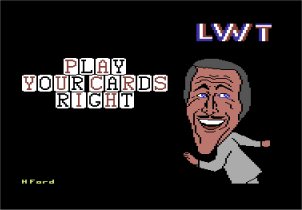 There’s not much to say about this game really. It plays a reasonable enough game, although it’s quite annoying after the survey question it doesn’t tell you what the number is and leaves us with “X has won”. Also, it’s a real shame there’s no song and dnace when someone wins a round. 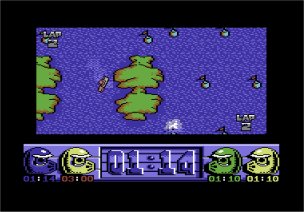 Controls: @ and / to move up and down to select teams. SPACE to confirm. Z and X are left and right, @ is accelerate and SPACE is fire (this is assuming you use the keyboard control option). Go up The Hill by holding SPACE whilst tapping Z and X and using @ to jump.

We actually prefer the Spectrum music for this, although this sounds more like it might be the title tune. This features ELECTRIC GUITAR, or a close approximation of it. This is marginally easier to play than the Speccy version, it’s slightly more forgiving. Also: the dirt track scrolls! 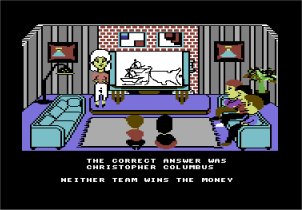 Controls: You only need to type in the answers, but be aware that this is on two disks so you’ll need to attach the question disk to one of the disk drives (using the file menu) then it will work OK.

This is based on the American original show so all the prizes are in dollars and you won’t recognise the music. All you have to do is type in guesses, and you can type in words if you like and if they’re there they’ll show up on the drawing board. Unfortunately, they’ll keep drawing that word, as it seems that each round is alike a 60 second ‘film’ if you like. Some of the drawings are baffling, but I suppose that’s why we like to watch it on the telly as well.

We’ve probably missed quite a few games out here, so if you know any more then please drop us a line so we can add it to the list for other people.

Thanks to Andrew Fisher for pointing us in the right direction.

2 thoughts on “Wheel of Commodore”