Ah, the humble Spectrum. Our little rubber keyed chum (except I first had a 128K +2, which was all plastic. But anyway.). There were lots of gameshow conversions for it, so why not let us enlighten you?

The Spectrum emulator we’ve been using for these is EmuZWin, a program that will work on Windows XP. All the ROMs can be found on World of Spectrum, and links are provided as appropriate. Without further ado then, let’s type in J and two double quotes and see where we end up. 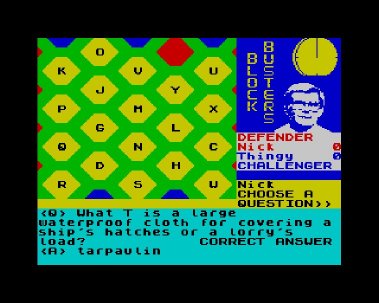 Well, it’s actually very faithful to the TV show. It could do with a third buzzer so you could play two against one like on the television. The board flashes when somebody only needs one more correct answer. There’s a nice sting from the TV show when you connect from side to side. The Gold Run is rock hard, however, not helped by the fact that whilst the clock normally stops during the main game if you’re typing in an answer it doesn’t whilst you try and complete one. The game also accepts close spellings which is useful. This is actually one of the better quiz show conversions.

There is also a sequel of sorts called Gold Run but is clearly written by somebody else. On the plus side, the music is better. On the other hand, it only does the Gold Run. It features 9 difficulty levels, but the only discernable difference is the time you’re allowed to cross the board (ranging from under 40 to over 200 seconds).

There are in fact quite a few versions of BlockBusters in existance. Many of these would seem to be based on the US version, excitingly. 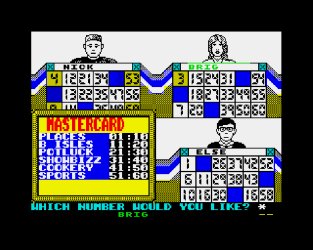 Controls: Q, Z, P, M for the buzzers. Type in your answers and numbers as normal.

This is also very faithful to the TV Show. Three rounds (four corners, middle line and finally the buzzer full house) are all present and correct, as is the Gold Card end game for the winner. AND! You get to pick a prize if you win a round, just like on TV!

There doesn’t seem to be a theme tune, although there’s a buzzer sound and the “Wallied” sound are all present and correct.

When you try and input an answer, the letters are dashed out Hangman style. Unlike Blockbusters however, there appears to be no leeway in misspellings. Boo. Also, the questions were already repeating before the end of the first game. Not good. 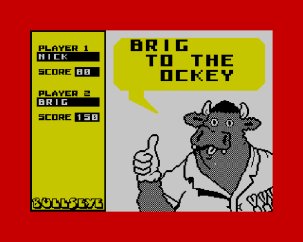 Right, this is only for one or two players (whereas it was three teams on the television). Never mind. All rounds are present and correct although for one reason or another you earn points rather than prizes on Bully’s Prize Board. Going for the 101 or more gamble means you lose half your points if you’re wrong. Oh man! The throwing darts bit is poor, although we quite like the game’s attempt to fit the theme tune in.

There may well also be a version of the game that was lightgun compatible. 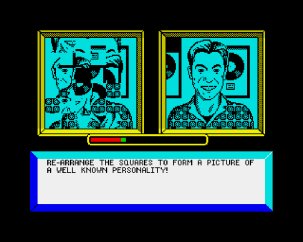 Controls: QAOP to move the cursor up, down, left and right during questioning and to control the “rearrange the face” and “follow the leader” challenges. Numbers 1, 2 and 3 in the Tower of Hanoi based puzzle. For the assault course, the controls change to Z, X for left and right, P to lift/burst things and L to jump. We don’t know why this is.

Again, a fairly faithful recreation of the game as seen on telly, except for a lack of gunge (I’m sure you can find your own alternative) and the “physical challenges” have been replaced by more mental fare (there are three. Re-arrange the face is aggravatingly tough, follow the leader is a bit easy, Tower of Hanoi is reasonable but doesn’t get played much, mainly because it’s the same puzzle each time. The questions are actually quite boring.

The winners get to ‘do’ the famous Double Dare obstacle course of legend. Find eight flags and get to the end within the time limit. This plays like quite a bad platform game. It starts off with the worst screen (find a flag under a random hen whilst you try and outrun the conveyor belt which changes direction and stops at random, which you can’t, but still). The other screens are a little bit more interesting. Your character doesn’t seem to have a face. 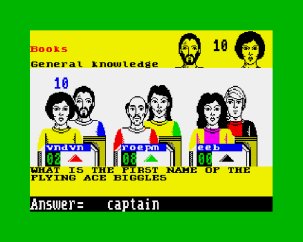 First of all – this has a cracking representation of the theme tune and music used throughout the show. Whatsmore, it plays a good game, and the questions are of a tough standard. However, picking players is unneccessarily fiddly I reckon and the end game gets quite confusing with the extra set of three buttons. 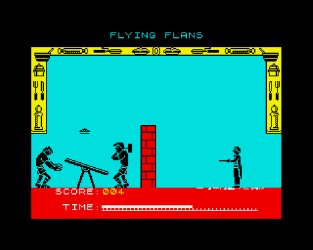 Six games ranging from dire to not-very-good, of which the flan catching one and the Bronto Bashing marathon are passable, the others are boring or suffer from really bad collision detection.

Still, the flan event predates Goldeneye in the “mess stays where it is” stakes. 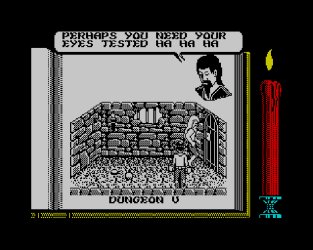 Controls: 6<, 7>, 8v, 9^, command system – each action consists of a “verb noun” command. If you want to do something, press the first letter of the verb you want to do and/or press control to cycle through commands. Press enter and do the same for your noun.

First thing to hit you – wow, that’s quite an exciting hi-energy theme tune remix. Good. Sadly it’s all a bit downhill from here. Puzzles that aren’t particularly logical, and picking the wrong answer leaving you trapped (on the first screen it’s imperative you give the food to the old man rather than take it yourself. Also: water.). The cmmand system is an interesting way of integrating text adventure with arcade action but ends up being far too unwieldly in practice, especially when it comes to trying to fight (which, of course, never happened on the telly).Horribly frustrating to play when I was a kid, still horribly frustrating now.

The Krypton Factor we couldn’t get to work properly with its exciting multiload system. This is a shame, because I remember a very reasonable interpretation of the show to be had. 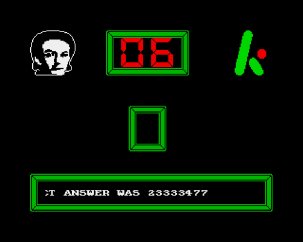 Actually, I remember the assault course not working very well, the Intelligence test being 20 times more difficult than it needed to be because of the controls (which is why I wanted to document them here), an overlong observation round (which in fairness was quite a clever way of getting round the old Spot the Difference clips) and a slow General Knowledge round where you buzzed in, shouted an answer and told the computer if your answer was correct. And a reponse round which was unbelievebly tough.

Still, that theme tune is pretty ace though, although it doesn’t seem to be the theme tune to any episode of The Krypton Factor that I know of. 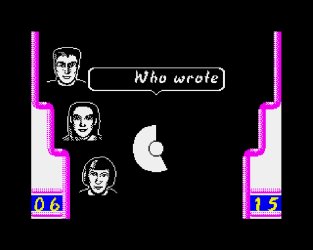 To all intents and purposes, these are the same games but with slightly different graphics and digitised pictures of Mike Read and David Coleman. QAOP – Space are your friends, but as quizzes they’re a bit tedious.

I’m afraid I’m not old enough to appreciate if this is as close to the real Mike Read as you’re ever likely to get. 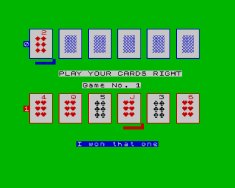 Now this is quite interesting. If you follow the link to the Crash article, it looks like it’s a proper version of the telly show. However, the game we’ve got downloaded is a very basic version of the “higher higher, lower lower” bit, without any of the survey questions. It has the catchphrases, it has a very quick burst of the theme tune. But it also has six cards in the row (as opposed to five which is what it should be) and you can seemingly only play one player against the computer. Boo. 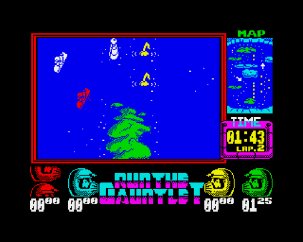 Well, we’ve saved the best music for last. We can’t remember the actual show’s theme tune but all the music here (all two tunes) kick ass. And! We’ve still got Martin Shaw to host. Good.

The actual game itself would seem to be a really really unforgiving version of Micro Machines. Drive round a course from a top-down perspective avoiding bumping into anything, as that will make you spin out wildly. The boats have tremendous inertia. The Hill is just really difficult. The team with the least points at the end of each round is eliminated, rest assured that will be you.

We couldn’t get Sporting Triangles to load I’m afraid. You’ll need an emulator that can play disks (which is probably most of them, in fairness.)

Thanks to the World of Stuart forums for suggestions.