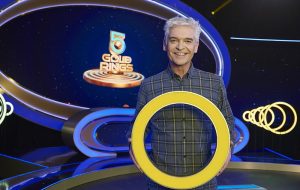 Philip Schofield returns with a new series of visi-quiz 5 Gold Rings and its pretend hi-tech floor.

There have been a number of changes since the first series – new set (the last series was filmed in the Netherlands on their set, this one was filmed at Elstree) and new gameplay mechanics – this time teams only get one crack at each question, and if they get it wrong their opponents can come in and steal the money for themselves, so it’s no longer effectively two solitaire games leading up to a final – the advantage for the final feels better earnt. It also means more questions as everyone is guaranteed five plus a floor flip.

I went to a recording back in December and you can read about the experience here.

I reckon the changes that have been made are solid and good. I don’t know if they are enough to break the show out into proper ‘hit’ status. You can still appalong, or at least could at the time of recording, but like most appalongs I just find it too much hassle for not enough reward whilst trying to watch a TV show.