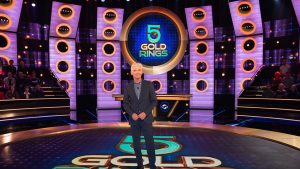 Phil’s back with a new visual quiz where contestants are challenged to answer questions by putting a ring around where they think the answer is on a big touchscreen floor.

Two couples play, each one hoping to win £25,000. After each question their personal pot goes up but the size of the rings go down. Teams have two lifelines – ask some people in the audience or flip the board and get another question. Whichever team has done best in their individual round gets control of the final all-or-nothing winner-take-all question. And using super whizzy technology, even though the show is recorded there are graphic inserts to show how people are doing at home.

We’ve seen the Dutch show, 5 Golden Rings (no I don’t know why they opted for a slightly different title), we thought it was OK although we don’t quite understand why telly people are getting very excited over it (it’s certainly done unremarkably in the Netherlands on SBS6, although not a flop). It’s up against Countryfile which doesn’t help, but the demos might tell a more interesting story if they’re ever revealed. It certainly doesn’t need to be 65 minutes.