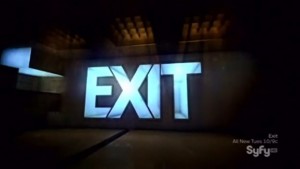 Long time patrons of the Bar will know that we really like the Japanese show Dero! so much so that pretty much immediately after watching an episode we wanted to find out as much about it as we could and ended up writing this feature on it. So naturally we were quite excited when we heard that there was going to be an English languange version, then tempered our excitement when we remembered that American adaptations of non-US entertainment shows are pretty much universally rubbish.

Still though, a picture was released of the show’s Beam Room a couple of weeks from launch and suddenly we were quite excited again, it looked like they’ve kept the spirit of the Japanese show fairly well. We were hopeful.

And then we finally watched it and thought it was basically not completely awful, probably about as good as we could have expected from the staff who were behind it but that it definitely missed a trick or two. Which on further viewing just makes the whole thing seem a bit more disappointing.

Handsome manly serial killer Curt Doussett invites four teams of two to his brown bunker in the middle of some mountain somewhere. One team will get the chance to walk away with $10,000. They will do this by entering rooms, answering some pop culture questions then leaving with the teams that do least well in answering pop culture questions being despatched.

The first game in each episode is the beam room and is by far the most successful – people get on beams (which purport to be 72 inches/six foot but I’m not sure I’m buying it) and have to solve puzzles whilst all the time they are thinking the beams they are standing on retract into the wall, eventually a team will run out of beam and plummet into the abyss below never to be seen again. Whilst they’re solving visual puzzles we’re treated to confessionals explaining how difficult a puzzle was to solve (filmed, if haircuts are anything to go by, weeks after), followed by footage of them not doing very well at solving a puzzle. As proof of concept the beam room totally works.

Unfortunately in trying to tie the ideas from the original Japanese show into their all-or-nothing based structure, the rest of the rooms suffer terribly with things that look like they might pose jeopardy but not really. Take fan favourite the Stone Monster – here the suitably imposing Shredder. In it teams attempt to solve word puzzles at various stations in a tunnel whilst an enroaching monster/the shredder threatens to eat them up. Now in the Japanese show there is actual danger that the monster might get close enough to eat someone up – they’ve got to turn around and punch it on the nose, which will sacrifice a team member but buy more time for the remaining contestants. Not so here, here there is no danger of that happening, simply the team who takes the longest time to answer all the questions gets swallowed whilst the production make it look like something exciting might happen but won’t. It’s a pretty poor adaptation not helped by the refusal to allow partial team success.

The sand room makes for genuinely terrible television. The original had contestants working out people, places or things given clues against the clock whilst sinking into quicksand usually played solo or as a pair. The US show takes this idea then makes it as tedious as possible, a back and forth battle of clues where if you don’t know the answer you sink a little bit into the sand. After fifteen wrong guesses, you’re sunk, which means we are probably going to be watching upwards of thirty attempts at giving a correct answer to clues which are usually so obscure they might not have bothered.

The end games with the crushing ceiling and water tank are more successful, as well they probably should be given that these are basically all or nothing in the Japanese show as well and therefore require the least adaptation. Unfortunately whilst the Japanese show featured quite clever Crystal Maze-esque locked room puzzles and wordplay here we are limited to “put these things in order” followed by “answer some questions” against a time limit, which they probably fiddle for a close finish anyway. We’re thrown a bone with the use of a stroop test in the water tank.

It all adds up to something I desperately want to like but ends up a bit disappointing. But at least unlike Whodunnit? they don’t feel the need to answer the question “have they really just murdered these people?”, assuming the audience is basically intelligent enough to know the answer (which is “no”, incidentally). It was never going to go for the Japanese variety angle (the Japanese show has prizes but is played mainly with celebrities for laughs) but in taking it more seriously they’ve made the game much less interesting to its detriment.

If you’ve not had a chance to watch it (and they’ve made it quite difficult), a few episodes have been put up on YouTube so watch them whilst you can:

One thought on “Let’s have a chat about Exit”