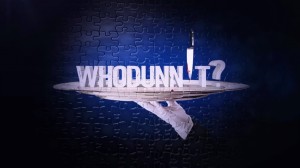 So Whodunnit? finished in the US last night and certainly it was an odd little show for a number of reasons. I ended up quite enjoying it but the set-up was far from perfect.

For a start it never seemed quite comfortable believing its own fiction, and the last ten minutes of the final proved this right up until the end. Contestants who are murdered except aren’t being murdered, and a murderer led off by police car at the end when really if there were murders happening you’d think someone would have called the police right at the start. It didn’t help that people thought the contestants were really getting murdered and they had to point out that they weren’t, which spoilt the surprise of the final shot a bit.

The title is hugely misleading – working out who did anything was in fact the least important aspect of the entire show – you never had anything to figure it out from other than who you thought looked a bit funny, they had no real agency throughout the entire run and the reveal at the end – that it must be you because it isn’t me – I think it was meant to be dramatic but actually felt rather embarrassing, especially when they started rhyming unconvincingly. It actually would have been far better if Giles had done it, or at least it would have been better if they treated it as a series of procedurals with the murderer being a known but outside force to be revealed in the finale then the end would carry rather more impact. Or if its going to be one of them at least give the murderer something to do!

Everyone goes on about “ooh, it’s like The Mole,” well it’s only like The Mole in so much as its got some puzzles in it. Many of these were fairly entertaining to be fair and I’m glad they got a bit more interesting than the opening week. It’s a shame the only way to find the murder weapon was to successfully complete a riddle based treasure hunt, like in real life. I could take or leave the information sharing aspect but accept that splitting the evidence in such a way that you had to collaborate to work out the full story is quite clever.

It was nicely shot, and it would be a shame not to see Giles again (how unlucky would you have to be to sign up to work for another mystery murderer at the same house?), but the numbers aren’t looking good for another season.