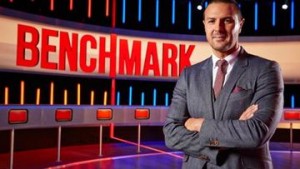 A simple game with a simple host, Paddy McGuinness challenges ten people to answer a range of numerical questions, the average of which forms the notional Benchmark. The challenge for our plucky main player is to work out whether the actual answer is above or below the benchmark for big cash prizes.

There’s also a secondary game going on across the hour, the ten benchmarkers are trying to be as accurate as possible because the best one gets to come back the next episode as the main player, in a fairly clever mechanic not seen since Judgemental with Sophie Raworth.

I’ve no idea how well it will fill an hour, but producer Stuart Shawcross comes across as one of the good guys, so we wish it best of luck. There are also five celebrity specials to go out in primetime, and here’s an interview with Paddy.