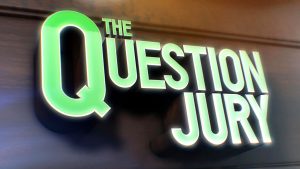 Quizzy Mondays get temporarily quizzier this week with the launch of The Question Jury on Channel 4 afternoons, in the fabled Benchmark slot no less. Or one of them anyway.

Seven people in a jury room work as a team and face questions to win a cash prize of up to £10,000. At the end of the show they must select a Final Foreman who will play for all the money for themselves and win or lose will leave the show to be replaced by a new person the next day, with entirely new groups starting on Mondays.

An interview with the producers (one of whom is Wiiiiill Macdonald) suggests each person gets to be the Foreman once a show rotating, which suggests seven questions before the final, which suggests slow. They’re banking on the reality aspect to keep it compelling. Four weeks worth of shows have been filmed.

Does it work? Let us know what you think in the comments.