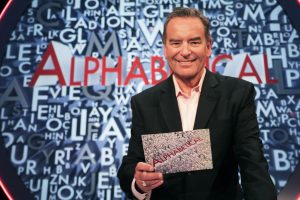 And so the next Summer quiz contender approaches and this time it’s Jeff Stelling with a UK version of a European reversioning of a light UK daytime panel game. That panel game was The Alphabet Game, the most famous European version is the still running Pasapalabra from Spain (Although it’s travelled to most of the major markets although not still running in many of them).

Three players play games and quizzes based around letters of the alphabet to build up time, the player with the most time gets to take on the current champion in the endgame for a progressive jackpot, if nobody wins the jackpot the person who does better at the game comes back to try again as champion the next day.

The endgame for the popular Spanish show is legendarily difficult (basically you have to get a question right for every letter of the alphabet without making a mistake), often building up for over a year and getting into seven figures so it will be interesting to see if they’ve adapted it at all for the UK market – it only has ten episodes to impress after all and there may be a point where nobody winning anything turns people off. But fans of quiz should be pleased, around 200 questions an episode are promised and Stelling is a safe pair of hands with this sort of thing.