This is a bit of a strange one and no mistake. There’s also a lot of talking involved, so if we’ve got some things wrong please let us know. 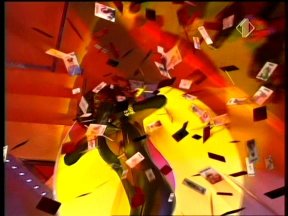 It’s a black woman in a black PVC suit pretending to be a cat!

Meanwhile, cards fly around the screen.

The theme tune is a bit like the Turkish tune Simarik by Tarkan, as borrowed by Holly Valance. 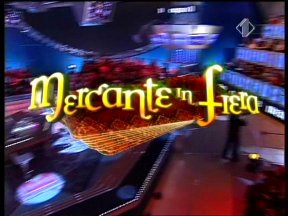 It can only be Mercante in Fiera!

BabelFish tells us this translates to The Merchant in Fair. 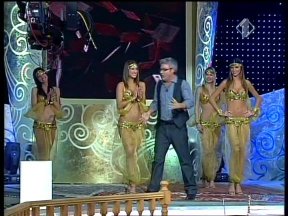 And here’s the merchant, Pino Insegno!

And here are some traditional Italian dancing women as well. 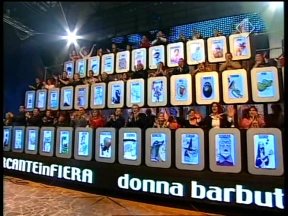 Here’s the contestant pool. Each sits behind a screen with a card on it.

Three of them will be picked to play.

That message in the black bar scrolls throughout the game, and we have no idea as to the significance of any of it. 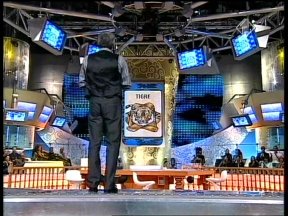 Three cards appear on the big screen. The people sitting behind the cards are today’s contestants. 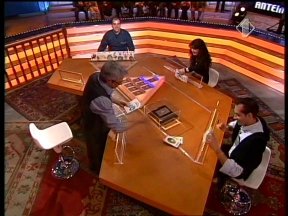 The contestants sit at the table and Pino dishes out the cards. There are 24 cards in the deck, but the cards change from day to day.

Contestants place the cards on the stands. 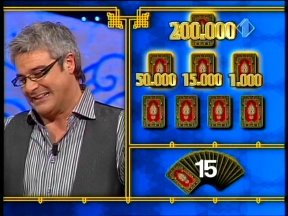 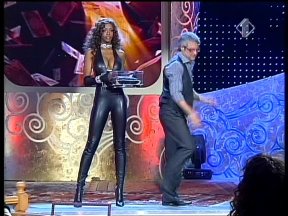 But one card is worse than worthless, it’s sealed in a box and given to the Black Cat.

It is important to remember throughout the game that the Merchant knows where all his cards are. 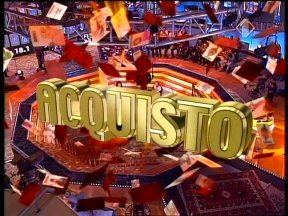 Round one is Acquisto – Purchase. 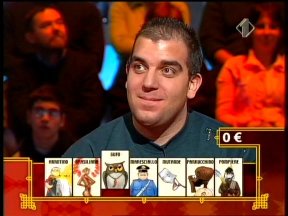 In this round, the Merchant is going to try and buy cards off players. He names a card and makes an offer for it in Euros (which appear to be virtual, in that you use them to buy and sell with later on but don’t appear to have any real world value).

Here he’s trying to buy the owl card off this contestant for €900. He is happy to let this purchase take place. 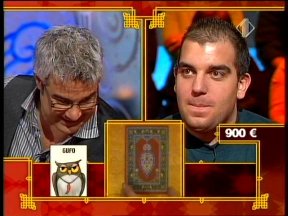 The Merchant is now going to reveal one of the useless cards – it should be one of this contestant’s. 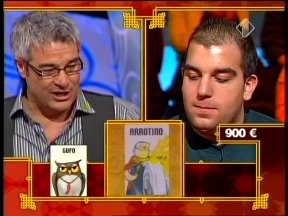 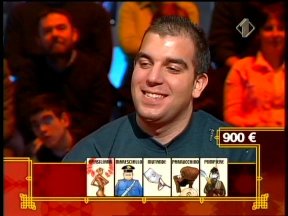 And that card is also removed from play.

Everyone gets a go. 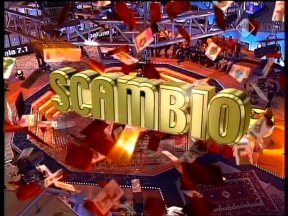 Round two is Scambio – Exchange. 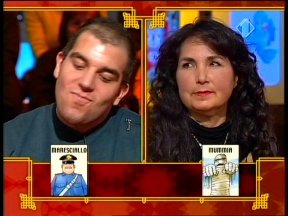 The Merchant picks out one from two player’s hands. He is going to prove that one of them is a worthless card. The player on the right has to make a decision as to whether he wants to swap the cards, so he’s not left with the dud which will get removed from play. 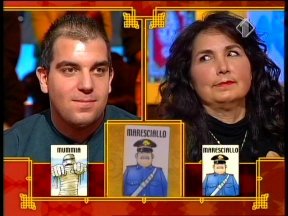 He elects to swap. Good thing too. He gets the Mummy for his troubles, she loses out.

Each contestant gets a chance to exchange. 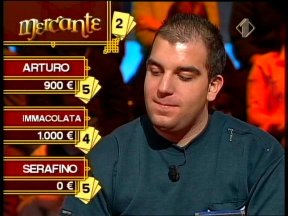 Here’s a rundown of who has got what at this point. 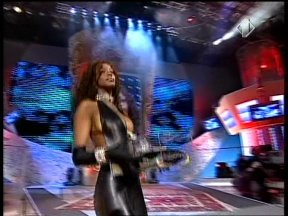 But now one of our plucky contestants is about to be eliminated, eaten by the Black Cat.

She brings her perspex box with the card in it to the table. Whoever is holding this card is eliminated from the game. 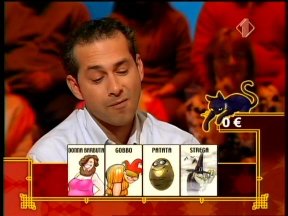 The Merchant reveals that this contestant is holding the Black Cat’s card.

He is given the chance to get rid of it. He selects one of his cards and gives it to another player. If he’s very lucky, he’ll escape. 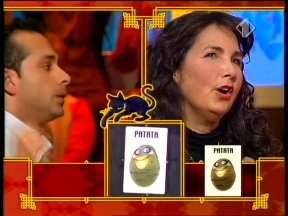 He’s given away the potato.

And what a good guess! This female contestant is eliminated! 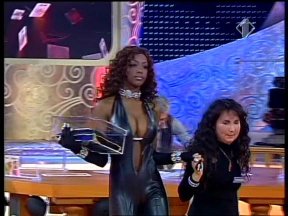 The cat leads her away, she loses all her cards and cash to The Merchant. 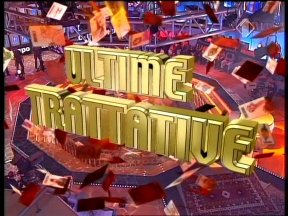 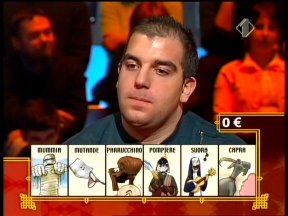 The Merchant gives the players an opportunity to buy the merchant’s cards from him with the money they sold for earlier.

The other contestant doesn’t have any money, so is offered a swap. 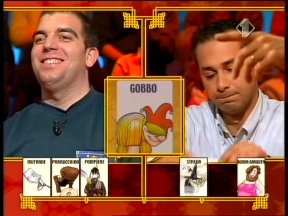 Negotiating over, The Merchant reveals the remainer of the fifteen worthless cards.

Whoever has the most cards left at the end is the evening’s winner and will go on to the Pyramid. That’s the chap on the left, here. The Merchant takes the loser’s cards to add to his own. 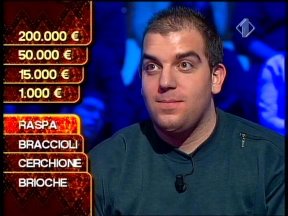 Here are the prizes on the Pyramid tonight. 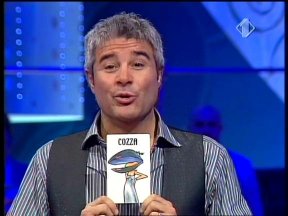 Each “round” begins with negotiation. The Merchant offers a swap proposal from the cards he has for one of the cards the contestant has. 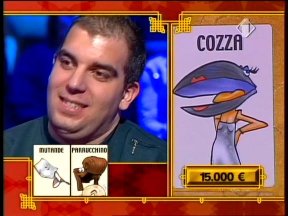 After each round, The Merchant reveals one card on the Pyramid. He should have gone for it! 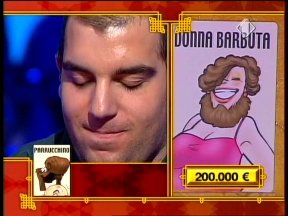 And the bearded lady is worth €200,000 this evening! The Merchant offered him that earlier as well.

The Merchant and player attempt to negotiate a price for the last card. The Merchant will not offer more than €4,000 for it (if our VERY rudimentary Italian is anything to go by). 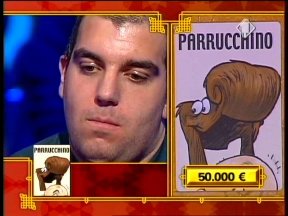 The player refuses it, which was a good decision! 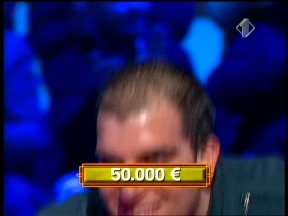 This feature was originally written in 2007, an edited selection of the comments from the original comment box follows:

so there are two identical deck of 24 cards in this game?

…Pino was wery good at bluffing so he often tricked contestants into bad deals.

“”That message in the black bar scrolls throughout the game, and we have no idea as to the significance of any of it.””

In early episodes there was just “MERCANTEinFIERA” scrolling about. Later in the run there were card names with some numbers next to them, probably some statistics but the feature went most unnoticed. The pics seem to be from a late 1st season episode.

“”so there are two identical deck of 24 cards in this game?””

Actually there are 40 different pairs of cards (all those you can see at the contestants pool) but only 24 are used in an episode.