This week, take a trip with us to 1996 America. There’s only one real reason we’re covering this show – ooh, look at that set! 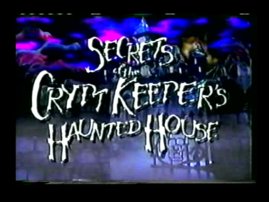 Since people have asked so nicely , we’re increasing the size of the pictures for future features. Anyway, this is Secrets of the Cryptkeeper’s Haunted House. 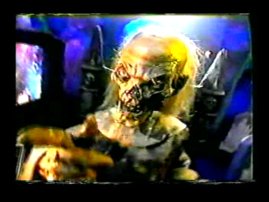 And here he is, star of schlock horror cartoons and late night spooky comedy drama, The Cryptkeeper himself. He doesn’t actually do very much during the show other than offer up sarcastic comments towards the kids and hoping they lose. "Have a nice DIE!" 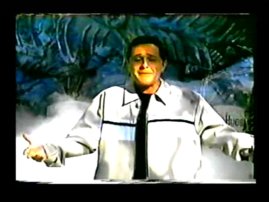 Will the real Slim Shady please stand up? The host of the show is proto-Marshall Mathers Stephen Saunders. Hey ‘sup? Etc. 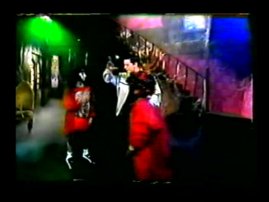 There are two teams, this week The Amoebas in red and The Newts in Black. The Amoebas are about to play the first game. But look at that house! It’s like a proper working proper set and everything. This was filmed at Universal Studios. 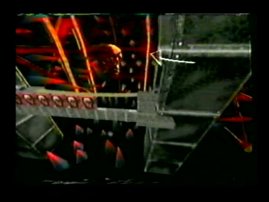 And that first game is entitled Fireball Alley. One of the contestants will act as the defender and will stand on the suspension bridge. Meanwhile the giant skull will shoot out fireballs (basketballs) with the aim of knocking down the gravestones on the wall. Each stone left standing after the barrage is worth a question worth five points. 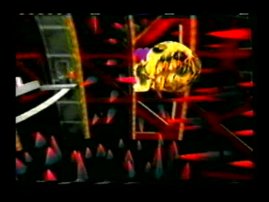 The skull is called Digger, for obvious reasons. He sounds just a little bit like the comedian Greg Proops.

You can just see one of the contestants coming out the door to go and defend, there.

What this picture is quite good at hiding is the quality of the moving 3D computer graphics which stand up very well considering this is from 1996. 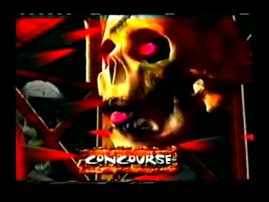 The question in action. These are in the form of "what do these things have in common?"

The answer to this one is "things you would find in an airport". 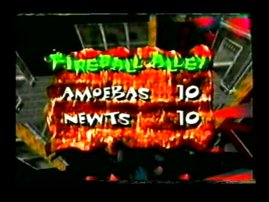 Truly, it’s a two horse race right at this moment.

Round two is set in the garden and is entitled "The Abyss".

One contestant is in the garden giving answers to questions… 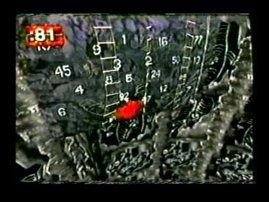 … their team mate is hanging above a "virtual chasm". The answers to the questions are all numerical, it’s up to the kid in the garden to relay the question to the kid on the ladders and get him to hit the right number. If it’s right, it will turn yellow and they win five points. If not it will turn red. They have 90 seconds to get the five questions correct.

Completely unfairly however, whilst The Amoebas have to clamber all over the wall to get to their answers, all The Newts answers were reachable from that first ladder on the left. The Newts got all theirs, The Amoebas did not. Playtesting, there. 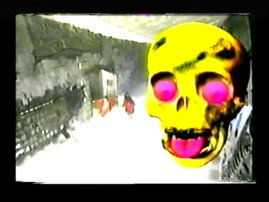 "Fright" three is the Shrinking Room, as introduced by Digger. On the left there is a wall with six words, each word has a letter missing. On the right of the door are letters attached to the wall. For each word they correctly fill they win five points, if they get all six within forty seconds and shout out the top word they get a ten point bonus. 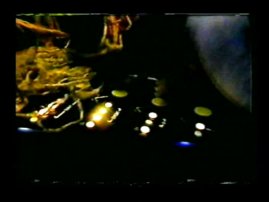 But what’s this? The Cryptkeeper hammering on some buttons? 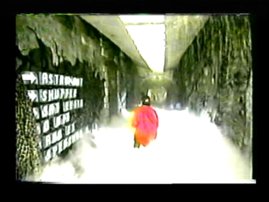 Ah, to increase the pressure the wall on the right is shifting inwards and the ceiling is lowering. Also: plenty of dry ice and rocks falling. 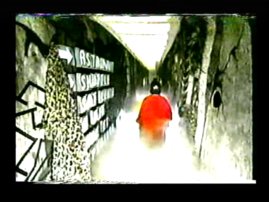 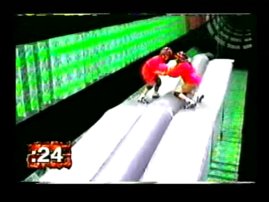 Round 4 is the Worminator. Between them the contestants are carrying three "orbs". In each segment of the "Worminator" the kids have to transfer the orbs to each other, for no other reason than they’ll be disqualified afterwards. They must progress to the end where they must put the orbs in the "Velocitators" (some painted laundry baskets) for 10 points a piece. They must do all of this whilst a 100mph blows at them. 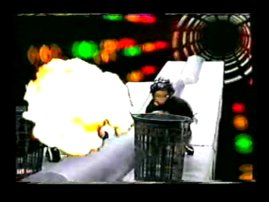 Failure to do this within the time means getting vapourized.

Which is harsh, but there you go. No points for The Newts, here. 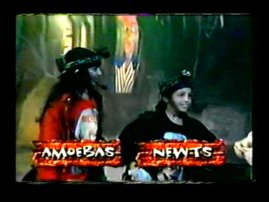 The final game is called Skullduggery. With the scores at 55 to The Amoebas and 60 to The Newts, it could go either way. And sadly Secrets commits a cardinal sin by making the final round a Fixed Point one.

And what’s commandment number 10 in the Gameshow Ten Commandments? "Thou shall not make the final round worth a fixed amount of points". The winner of this round wins 50 points which either makes the rest of the show pointless or the final round anti-climactic. Boo. 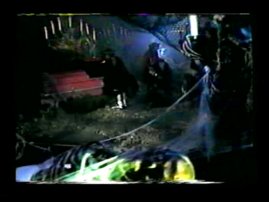 Which is a shame because it’s quite good fun. The kids run around the various areas of the Cryptkeeper’s house looking for skulls in the Finders Keepers stylee. This is the Master Deadroom here. 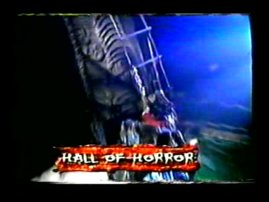 After about 20 seconds a buzzer goes off which is the instruction to stop searching this room and move on to the next one. There are four different areas. The other ones not pictured are the Mummy’s Tomb and the Dungeon. 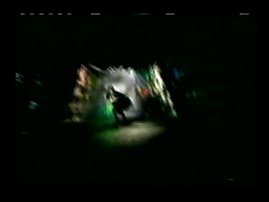 Finally the kids run through the tunnel underneath the house and pop up through some graves in the garden. 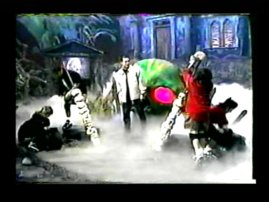 Once into the garden, their partner must thread the skulls on the spike. The winning team is the first team to fill up their spike, requiring 15 skulls we reckon.

But if neither team has enough skulls, the winner is the team with the most skulls, or the team who finished quickest in the event of a tie. 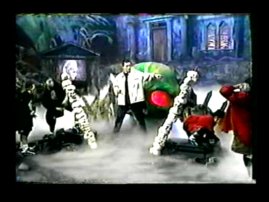 Neither team completely fills up their stake, but using our eyes and taking camera perspective into account, it’s plain ot see that the Amoebas have one more skull than The Newts. Fifty points to them! 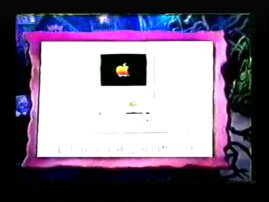 You’re the winners – have an Apple! 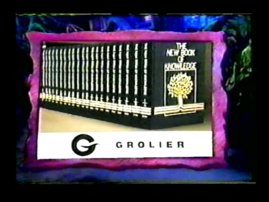 You’re the losers – learn more things with this set of encyclopedias!

Hey, who are the real winners here?

There are other games in the game pool. Whilst some of these ones are quite nicely done, it’s a tribute to style over substance really.

In the meantime, SimGraphics did a lot of the excellent computer graphics for the show.