We have no idea what, if anything, Tokyo Friend Park 1 was, but here is a show that started in April 1994 and has been on Monday nights ever since. With thanks to Dan for filling in the missing details. 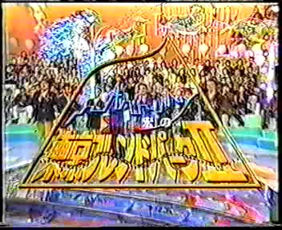 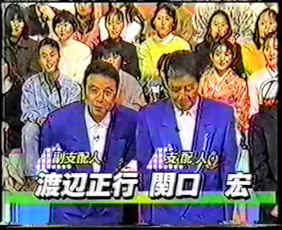 Here are our hosts. Not a clue, sorry. 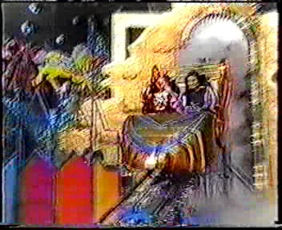 And more importantly, here our contestants coming in on a rollercoaster! Amazing. 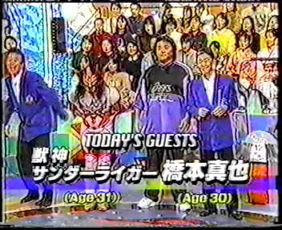 Like in many Japanese gameshows, the contestants are celebrities. Today, they are Japanese Pro Wrestler Thunder Lyger and other Japanese pro-wrestler Shinya Hashimoto. Age 30! 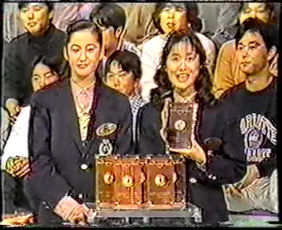 This is what they’re aiming to win – coins. Each one worth 100,000 Yen on their own (that’s about £500). However, they can be swapped for darts which they can throw for prizes… 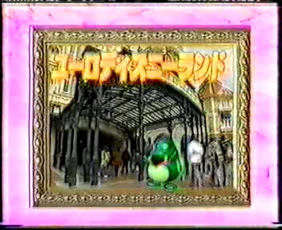 … or they can swap five for an all-expenses paid trip to Disneyland! Lovely! 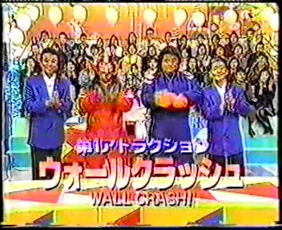 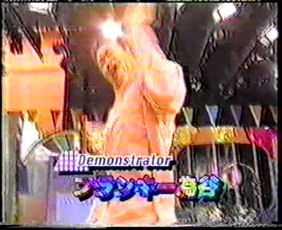 Some of the more physical games are demonstated by a Japanese comic. 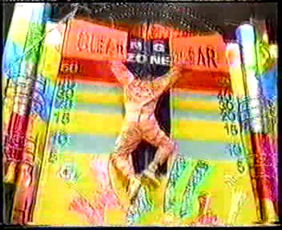 The object is to run along the runway, jump on the trampoline and launch yourself at the wall. Using your velcro gloves, try and get yourself up as high as possible, each hand is scored seperately. To win, they must either get both hands in the Clear zone up the top, or score 200 points between them with two attempts each. No points are scored for sticking to the No Go Zone in the middle, there. 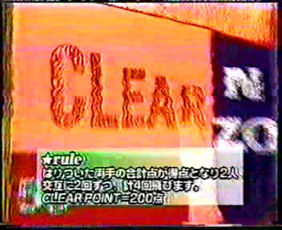 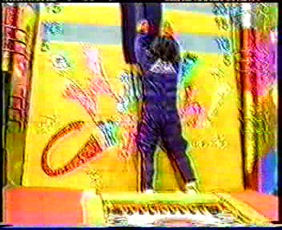 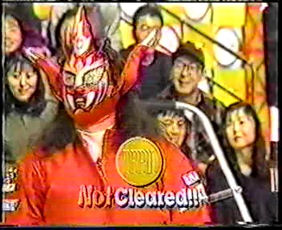 And the game is not cleared. 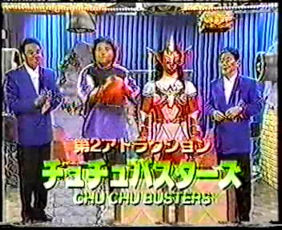 Game Two is Chu Chu Busters. It’s sort of like a giant game of whack-a-mole. 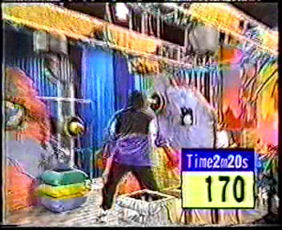 In 2:30, they must score 3000 points by punching the puppets that pop in and out of the set. They get fifty seconds on their own, and the final fifty seconds is both together. 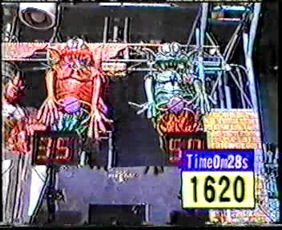 There are several "bonus" chu-chus that require multiple-punches. These two require fifty each, and on the individual rounds a jet of smoke introduces a bonus chu-chu that require 20 punches to destroy. Those are worth 500 and 200 apiece. 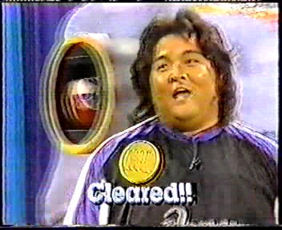 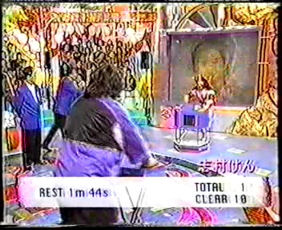 Game three is Mimic Paradise, which is a bit like a game on Michael Barrymore’s My Kind of Music. One person tries to do an impression of a famous celebrity whilst the other tries to guess, running between podiums after each go. They need to get 10 in two minutes to win. 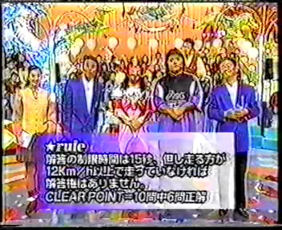 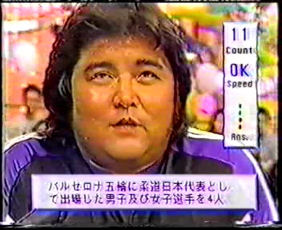 In this game, one person tries to give answers to a multi-answer question within the time limit, but they can only answer once their partner has the treadmill up to 12kph. 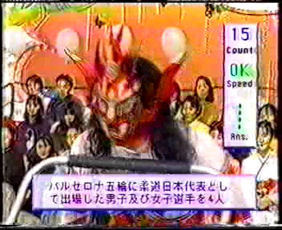 The pair need to get six such questions correct to clear the game. Presumably out of ten going by the rules summary. They swap places once three have been answered correctly. 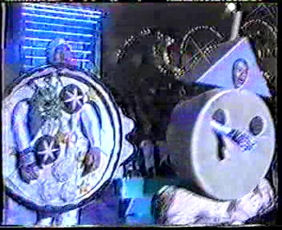 The final game is Hyper Hockey! 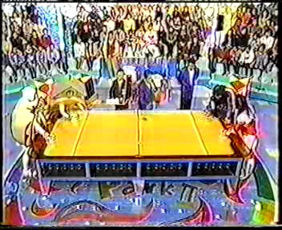 It’s a first-to-seven game of team air-hockey against the show’s resident comedians, who are handicapped by having to dress up in silly costumes each week. 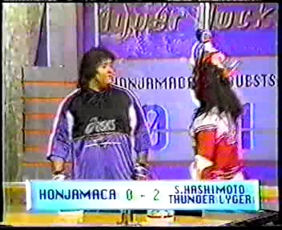 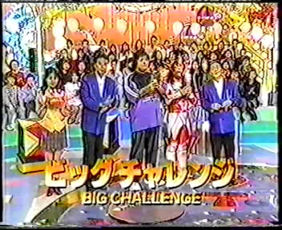 The final section is where they decide what to do with their coins – keep them, or swap them for a chance to throw darts at Bully’s Prize Board. 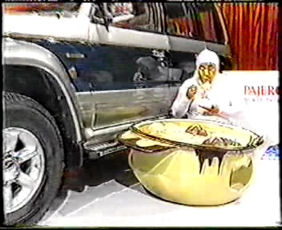 The star prize is not, in point of fact, a man eating some noodles, it’s the jeep!

Now it looks like the contestants have both selected a couple of prizes they’d like for themselves. These have been placed on the board as well. 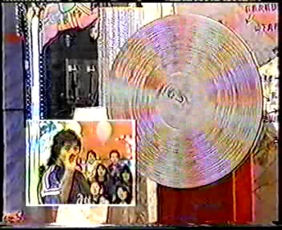 So, throw darts at the board and win whatever the dart lands on. To make it more interesting, the board is spinning at a fair old pace.

Those grey bits on the board are the booby prizes – a sponge! 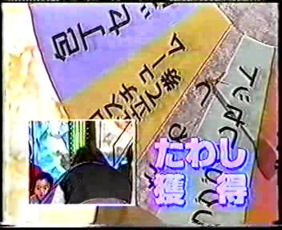 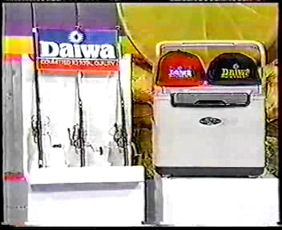 But with his second dart he wins the fishing gear! AMAZING.

Now we’re not quite sure how the distribution of prizes works, whether you win what you throw or what, because this appeared to be one of Thunder Lyger’s chosen prizes and he seemed very happy. Perhaps they get one each? 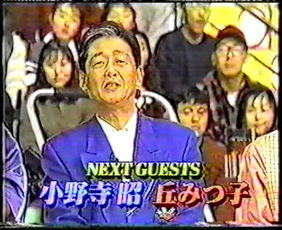 After the celebrities have used all their darts, a large perspex container filled to the brim with postcards is wheeled on. One postcard is picked, and the viewer selected wins a prize by having one of the celebs throw another dart at the board.

And that’s the end of the show!