It’s the US broadcast pilot for Wetten Dass…?! But we’ve never actually seen Wetten Dass…? so we’ll compare it to You Bet! instead. 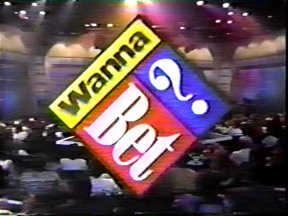 Our logo. The title sequence a montage of the stunts to be attempted that evening with the announcer saying “Wanna Bet this man will be able to do x, y and z?” over them.

The logo looks a little bit like a pizza box for no discernable reason. 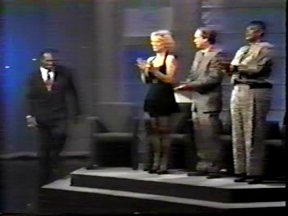 Our four celebrity guests who will be punting on the stunts outcome. That’s Evander Holyfield arriving on set, we’ve not heard of the other three (Victoria Jackson, Martin Mull and Marsha Warfield, we reveal for trivia purposes). 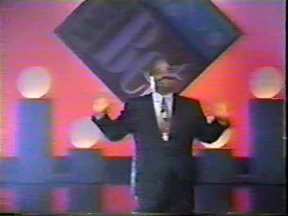 And here’s our host Mark McEwen.

We actually have no idea how his surname is spelt as we couldn’t find any information on the show online anywhere. If you know, please let us know. 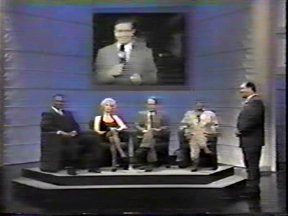 That’s Australian Gordon Elliot in the background there highlighting some bets coming up later.

Meanwhile host Mark explains the rules: there aren’t any rules because “it isn’t a gameshow” (right, whatever). Our guests simply have to try and guess if the people can actually do what they claim to do. 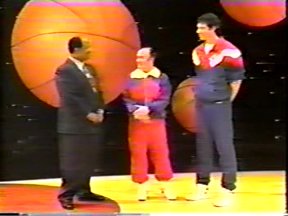 Here’s the first bet: the old man on the left (Tom, a father of fourteen) reckons he could beat a professional basketball player (Kiki, the tall one on the right) is a free throw competition. Best over ten shots each, going into “sudden death overtime” if the first ten shots result in a draw. 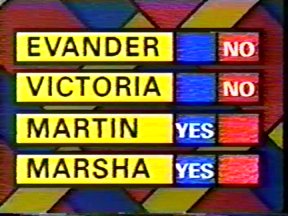 And here’s what everybody thinks. 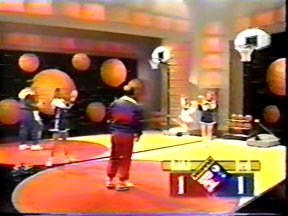 The bet in action. As you can see it’s one-all.

You can also see a large part of the set. The pictures in the background change from bet to bet.

“Regulation play” (my quote) finishes at 9-9, the final score being 12-11 to the professional. No You Bet! Betsie here, just a thankyou and goodbye. 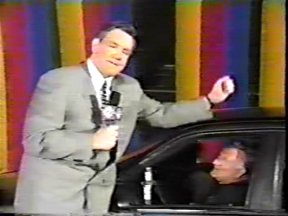 Gordon’s outside with our next challenger. These people think they can change a tyre on a moving car at 25mph. But how?

Our celebs make their bets. 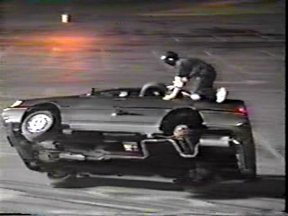 By cheating! Unknown to our celebs, these are professional stunt people. Of the two people in the back, one gets out to change the tyre, the other acts as a balance. 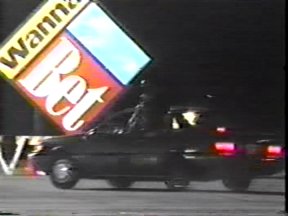 And they had to do it before running out of road here, which they do.

They had never tried it before, apparently.

“We said it would be fun, but we didn’t say it was going to be fair,” says Mark to the guests. 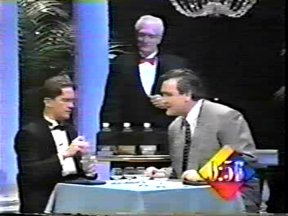 Next bet: a man who can tell you which of the five Great Lakes some water comes from by taste and smell alone.

They put a three minute time limit on it and gets interviewed by Elliot at the same time. 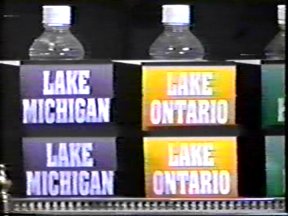 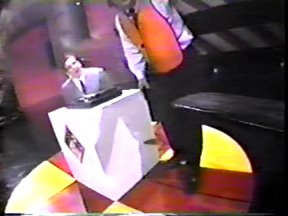 Next up, some men who reckon they could get a needle to start right at the beginning of a record on a turntable by using a forklift truck. This is the Truck Cam, clearly.

They manage it, and Beethoven’s 5th blares into the studio. 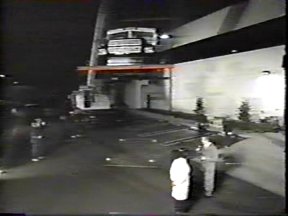 Next: Can you support the weight of a 14,000 lbs truck on just four brittle Wedgewood cups? Some people from Wedgewood reckon you can. 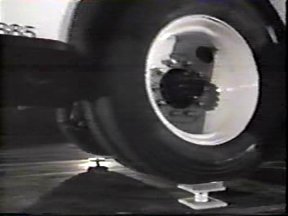 And you can… provided you put bits of metal on top of it to spread the weight. This causes a bit of a hoo-hah in the studio.

Mark asks the celebs if they should throw it out. But they don’t. 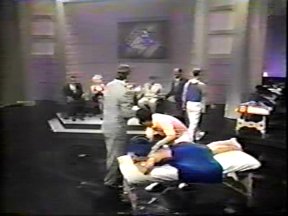 This man here reckons that given two minutes massaging any one of twenty-one women for two minutes wearing a blindfold, given three minutes he’d be able to work out which of them it was if they were put back in the pack.

He’s blindfolded and a random member of the audience picks one of the twenty-one women to get a massage (number 9 in this case). The two attendants bring the bed out so as to not give away any clues. Whilst he’s doing the massaging, the celebs make their guesses.

The attendants make sure there are no give away marks on her back before putting the bed back in the pack in its original position. 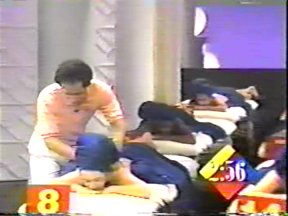 The beds are set out seven across and three rows deep and he’ll have to get round them all in three minutes, “eight-and-a-half seconds per woman,” Elliot remarks)

The clock only stays on screen for a few seconds at a time, around the minute marks. 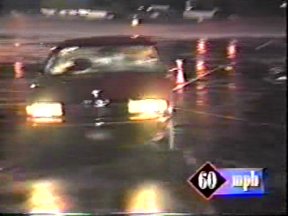 Tonight’s final bet: a man who reckons he can parallel park a car at 60 mph. This is going to involve a handbrake turn of a 720 degree nature. 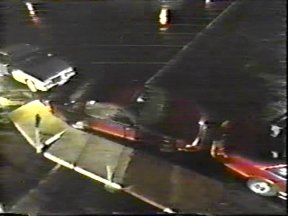 And he can! Provided there aren’t any pedestrians around. Gordon OKs it, after much discussion with the guests in the studio Mark declares it a failure. 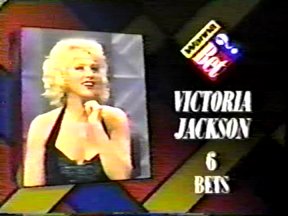 And we finish with the results of tonight’s betting. Victoria Jackson wins with six correct bets out of seven. Who saw that coming?

Evander and Michael finish on five, Martha finished last with three “but is probably demanding a recount.” 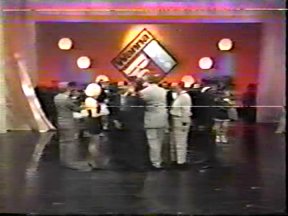 Hosts, guests and challengers all come out to wave goodbye. Roll credits.

They fit quite a lot in the 45 minutes of air time. But it seems a shame that in a show about betting, they completely forget about the risk and reward element right at the heart of it. Most other versions of the show (by “most” I mean “all”, unelss you know better) have a forfeit element for losing celebrities and a prize element for winners, whether that being money going to charity, or the winning celebrity’s score being converted to cash and given to one of the challenges which viewers vote most impressive. There’s nothing like that here.

This article was orignally written in 2005, the following comments were left in the original comment box:

lambertman
Nice find – I never knew about this (it aired during my TV blind spot aka college years).

Mark McEwen – at the time, CBS morning show weatherman. Now a Central Florida newsanchor and (as I discovered in my search) currently recovering from a stroke. That sucks.

Marsha Warfield – from NBC’s “Night Court” and had own daytime chat show for about a minute.

Martin Mull – was regular on “Mary Hartman, Mary Hartman” long ago; has made quite a career as guest star, commercial pitchman, and game show guest.

NJ
Looks rather lame to me. Lots of the bets seem to revolve around hiding information from the celebrities. The removal of the charity element takes a lot of the charm from the show too.

Paul Twist
Martin Mull was a regular on Roseanne! He was also in one episode of series 2 of the wonderful Arrested Development. Tsch, eh?

zzassttll
Victoria Jackson is dumb like a fox, and it is no surprise that she took first place. She is a graduate of two universities, with attendance at a third. Her “baby” voice is the result of a birth defect, but she was savvy enough to turn her flaw into an asset by playing the bimbo role to the hilt. She has put her career second to raising a family, and isn’t heard from much these days.

Ryan
We Americans did eventually get another version in 2008…only the new one actually had betting cash for charity. Worked a lot better than it did in this version.