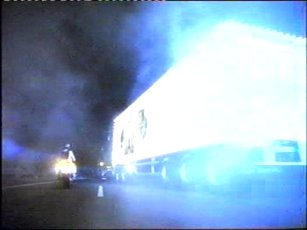 This will be the original version of the scenes that open many of the big money versions – a truck with loads of money inside being delivered to the studio, with the logo changing on the side of the truck for each version. Also: the number plate, which always has the top prize written on it, quite cleverly.

All the security guards are female. 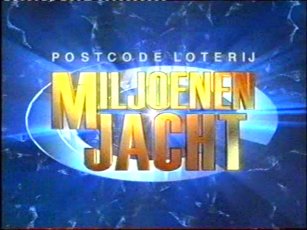 That logo in full.

This show is sponsored by the National Postcode Lottery. What we’ve gathered is that when someone wins a prize on this show, everyone with the same postcode also wins a prize. 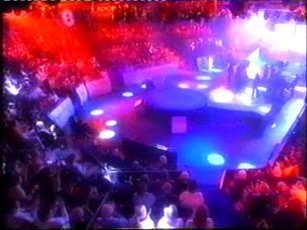 Our audience consists of 500 people split into 10 blocks. 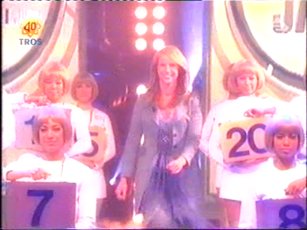 She’s John de Mol’s sister, I wonder how the De Mol family became so powerful in the media in Europe?

She has also hosted shows in Germany.

The 26 identical models are there also. The safe doors behind her are actually giant screens. 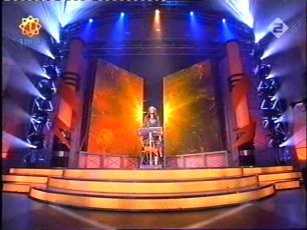 To represent the first round of questions, the screens decide to show pictures of nuclear fusion in space. 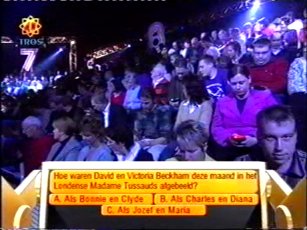 In the first round, the red blocks (blocks 1-5) face off against the blue blocks (6-10) over a number of questions. Each member of the audience has a keypad which they use to give their answer. 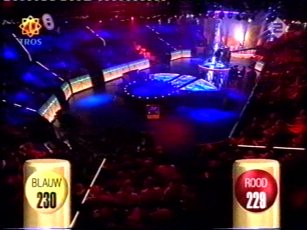 Everyone who votes for the correct answer scores a point for their team. After three questions, the team with the fewest points is eliminated.

The next round sees the five winning blocks of fifty compete against each other. The highest total over a number of questions wins.

Finally, the fifty have to be cut into half. The top bit of the block now competes against the bottom bit of the block over four questions, the highest sciring block goes through to the podium quiz. 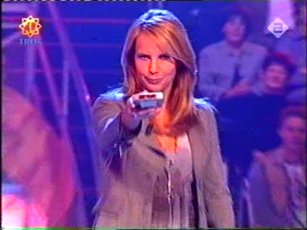 But whilst 25 have gone through there’s room for a 26th person. Linda wields her Random Remote o’ Doom to find out who out of the remaining 475 is lucky enough to be chosen. 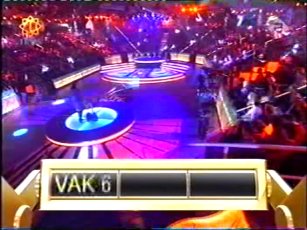 But there’s a twist!

The person selected is made “an offer you can’t refuse” – a luxury prize valued at about 10,000 Euro to give up their place in the game.

If they take the prize, somebody else is selected at random to become the 26th contestant. 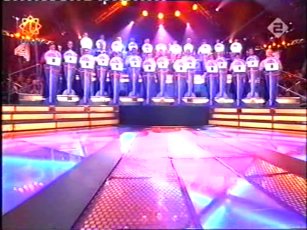 More multiple choice questions, beginning quite easy with only two options, gradually increasing to four options as the questions progress.

Each question is worth one point for everybody who got the question wrong, ergo tough questions earn you more points. 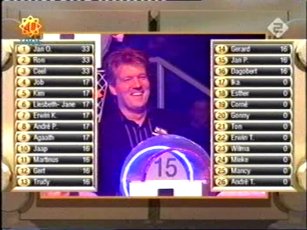 Here’s the scoreboard that pops up everysooften. Only the top two players will progress. 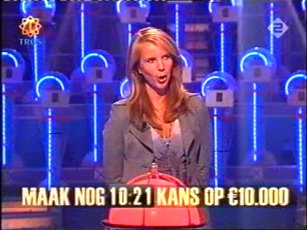 There are three viewer competitions in each show and the countdown until the end of each one pops up along with the phone number periodically.

Everytime a viewer at home wins, a viewer in the studio also wins via a process of seemingly random selection. 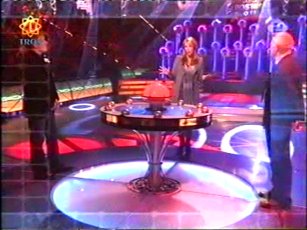 The top two face off at the podium.

Once again, someone is given a chance to leave the game and guarantee themselves quite a nice prize from the mystery spinning suitcase on the basis that there’s a good chance they could still leave with nothing. The pod in the middle of the podium will turn green – at that point, each player can hit the button and take the prize and leave the game, letting the other one have a go at the suitcases. If they don’t, the pod turns red again and (we’re told) a maths question is asked to determine the winner.

Today the mystery suitcase had a luxury holiday in it which one contestant took. As he’s left the game, and there’s still money to be won, a random person is selected from the audience to take his place. 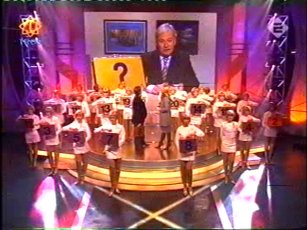 Time for a quick chat with the independant auditor who loads the suitcases.

Our winning contestant chose suitcase number six – this is handed to him by the appropriate model. 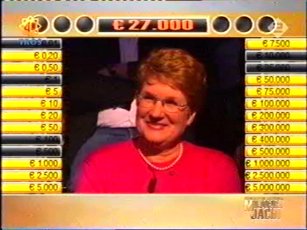 And we know how the rest works so here’s a quick look at the graphics. This is the contestant’s mother I assume. And there’s the bank offer of 27,000 Euro. 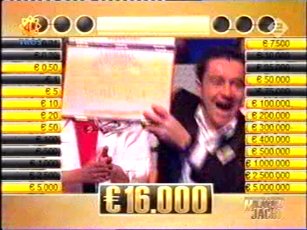 This gentleman has just won 16,000 Euro for correctly predicting what’s in his suitcase.

The Dutch have recently changed the middle game. Now the best five players from the winning block along with a sixth randomly chosen contestant play a buzz-in quiz involving naming a thing from the ten clues provided. Whoever gets it correct presses one of five yellow buttons in front of them to secretly eliminate an opponent. After they’ve made a selection, everyone else is given a chance to buzz in and bail out of the game, picking one of four suitcases containing 1,000 Euro to 22,000 Euro. They will still get to try and guess the contents of their numbered case later. If no-one bails out then the person who the answerer picked will get eliminated.

2010 edit: The middle game has changed once again – now the audience vote on questions and the final six try and predict how the audience will vote. The final two face off involves a climbing money clock with whoever buzzing in taking the cash but forfeiting the right to play with the briefcases. But there is a secret limit the money will climb to, if nobody takes it before it hits then it will go to a tiebreak maths question.