Do you remember the early-mid 90s? I do. Teletext had just taken over from Oracle, and I remember, growing up, how exciting it was to explore the service. In particular the Fun and Games section, and more in particular, Fastext based quiz Bamboozle.

And unfortunately that’s where the excitement stopped, because whilst lots of televisions had good old plain teletext, Fastext required (at the time) a more modern telly. The barrier to entry: four coloured buttons that could take you to pages without having to type the number in, and you couldn’t cheat with Bamboozle because it cleverly/irritatingly used hexadecimal page numbers. You can therefore imagine how exciting it was go round an Aunt’s house and play Bamboozle, then, because she had a modern exciting telly. 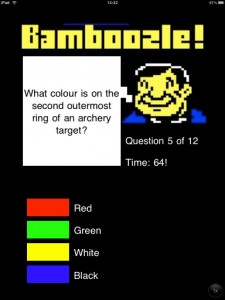 As you can see, it's taken me a fairly poor 64 factorial seconds to get this far.

Naturally time passes, Fastext became the standard and I could play it in my bedroom any time I pleased, and therefore it became much less exciting, and by then I mainly tuned in for Digitiser and Planet Sound anyway. Stay away from my bins, etc.

Anyway, THOSE HEADY DAYS ARE BACK! Teletext might not exist properly any more, but Bamber Boozler returns to your iDevice to quiz you with apparently thousands of questions, most of which taken from the old quiz itself. What this boils down to is twelve general knowledge multiple choice questions. You are timed, and a five second penalty is awarded if you get a question wrong (although the reality is by the time you get to see the question again it’s more like seven). You will not have to wait 30-45 seconds for the next question to flip round. At the end you can put your initials in (only three letters, which feels a bit poor) and your time is uploaded to a daily leaderboard, although seeing as the questions are different every time you play you aren’t comparing like with like which doesn’t seem quite right.

Bambette and Buster Boozler don’t seem to feature (no bonus question if you get a question wrong), but a rather jolly clock-based soundtrack plays whilst you quiz.

The questions are not terribly interesting if I’m being honest and you wish it moved a bit faster, but if you miss playing Bamboozle then, well, it’s Bamboozle.