Dick de Rijk’s attempt at catching lightning in a bottle twice has been a hit precisely nowhere as far as we know, but we all like ogling at different sets, don’t we? 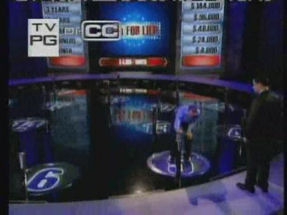 The show begins, as Endemol’s US shows inevitably do these days, with a montage. 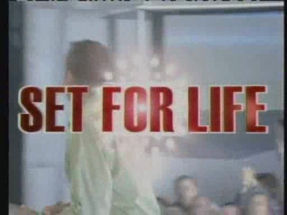 There’s not really much of a title sequence to speak of, there’s the light tunnel effect you see here and then the phrase builds one word at a time.

Before you ask – no! It’s not through the letter O, the title zooms out at the centre, which is between the O and R. 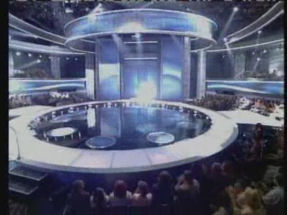 The set. Those doors at the far end also double as the gameboard. 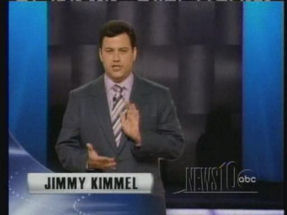 And here’s our host Jimmy Kimmel off of Win Ben Stein’s Money, amongst other things. 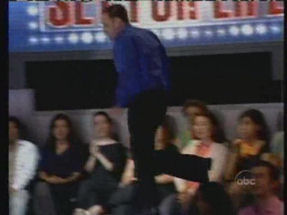 Another “in” thing at Endemol US, the contestant comes out of the audience. This guy’s name is Chris and he’s into karate. 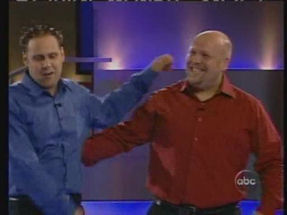 This is a game that requires two, so also in the audience is Chris’ brother.

His brother will act as the “guardian angel” making a decision to stop in the isolation pod. 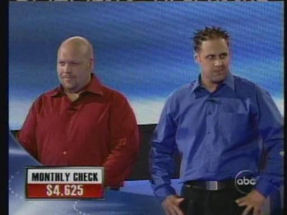 For some reason it’s decided not to show the qualifying game, but we are told that in it he earned the potential for monthly checks worth $4,625. 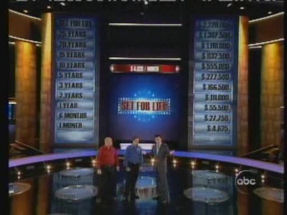 The giganto-door-cum-time-ladder in action. Very nice. 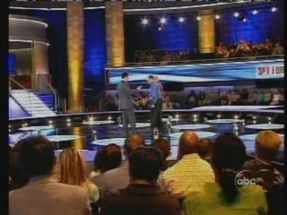 This is quite neat, you can’t see it very well but the 15 light podia rise up from the ground. 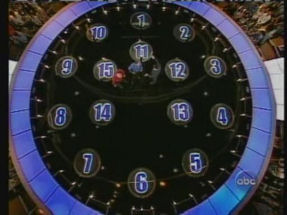 The overhead shot. Those are screens embedded in the floor. 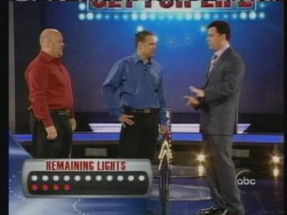 Picking white lights moves you up the ladder, red ones move you down and force you to play on. Four reds and you’re dead. Unless, that is, your guardian angel has stopped the game already. 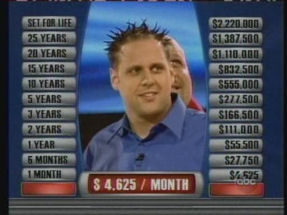 A closer look at the ladder. As you can see, it’s got 11 steps on it so a single red would mean you can’t reach the top (unless, of course, you get it right at the beginning). It’s a generous ladder at the bottom, but it the risks get a bit pointless up the top. 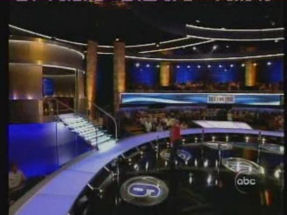 And with the game now set, it’s time for the brother to go into the isolation pod where he won’t be able to see or communicate with our player. He does have information though and can elect to stop the game by hitting a big red button. Neither he or Chris will know when the other has quit the game. Will he cost him hundreds of thousands of dollars, or will he save Chris from losing the lot? 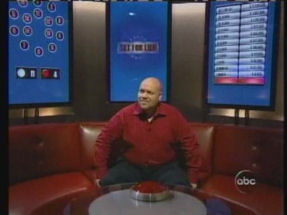 And here’s the inside of the pod. As you can see, the ladder is on the left, the board is on the right and in the middle will be the amount of time he’s currently “on”. 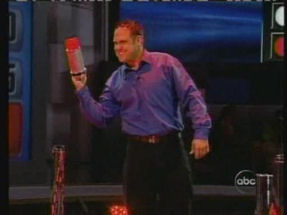 First pick is a red. This is not too bad – it’s right at the beginning so in effect it’s not cost him anything.

Just on the left you can see the studio “lights remaining” board which is inbuilt in the general marquee graphics, and comes on and off at appropriate times. 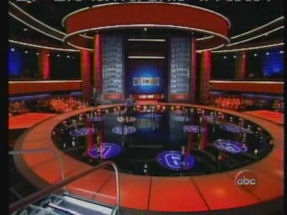 And the set turns red to indicate badness. 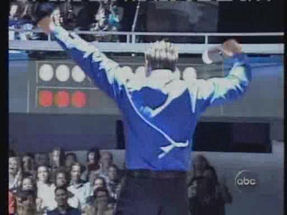 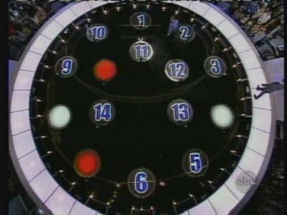 Here’s another overhead. As you can see, the tiles change red and white depending on what they were hiding. The numbers also “react” as they get chosen as well. 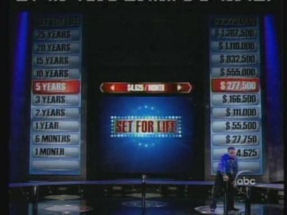 The board in action. you can just about see that “set for life” is greyed out up the top because it isn’t winnable. Basically, the story is, his four year-old nephew sitting in the audience starts picking his numbers for him because Chris manages to find red lights, and his nephew has an uncanny habit of hitting all the white ones – in fact he goes on a run of six – the sixth being the next one after this shot was taken. his nephew than recommends he stop, Chris does so, and it turns out the next one he would have picked would have been a red. Spooky. 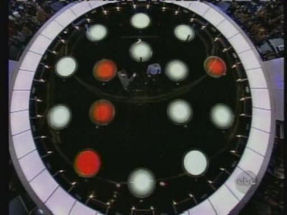 Jimmy reveals the remaining lights in one go. 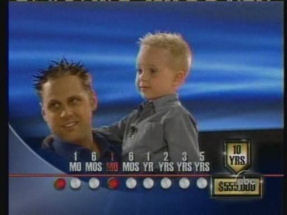 So Chris stopped on ten years – that’s a grand total of $555,000. But now it all depends on his brother in the isolation pod.

We can see how the game panned out down the bottom. Everytime a white light was hit, his brother was given the opportunity to quit by hitting his big red button. A camera was in there also. 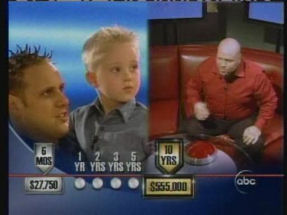 Chris’ brother turns into the bloke who used to do the Micro Machines adverts for some reason. Anyway, he’s not stopped yet, so it’s guaranteed money. But will it ten year’s worth? 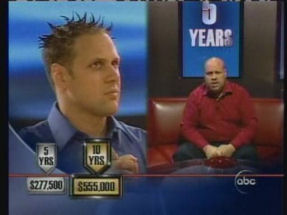 No, because he’s being a guardian angel and stops on five. 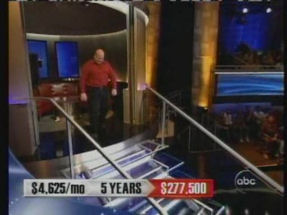 It’s interesting that nobody points out that he stopped one too soon and cost him $300k, seeing as surely the point of a “test your relationship” game such as this are the reactions to precisely that kind of thing.

Still there we are, a new contestant starts after the break. That’s Set For Life!

This article was originally written in 2007, a selection of comments from the original box follows:

– The set design is not original to the US (unlike DoND). It’s actually a carbon copy from the Dutch version, as their aired first. Everything is all done to a tee, the set, graphics, the rising lights etc…

– Although the US production never explain how they determine the monthly amount, the Dutch version show how it’s done.

– Three podiums rise up, each one featuring a colour which matchs to an amount (e.g. €1K, €1.5K, €2.2K). One player choose one light to elminate then their partner select the second light to reveal their monthly paycheck.

tom
is it as dull as the english version was?