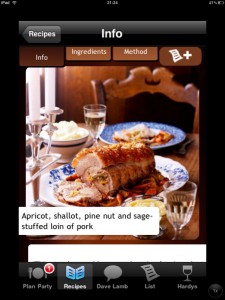 Right, I need to explain a few things first of all – I’m really not the dinner party type (although I do like eating things and talking to friends obviously, especially the eating things). Also in testing this app out I’ve not actually used it to plan a party as such, but I’ve had a play around with it to see if it all actually works.

OK, first thing you ought to know is that it’s sponsored by Hardys, and as such you’re paying for an advert in the main. However, the Hardys section does have videos on wine tasting, and each meal comes with its own Hardys wine recommendations, which is a reasonable touch.

The app comes with 100 meal ideas (it says, I can’t be bothered to count them) and is effectively a small recipe book. You can browse through them, and rather nicely if you decide you want to go out and buy things to make it it will add the ingredients to a shopping list, which you can take with you to the shops letting you cross things off  once you’ve put them in your basket. Clever.

The main course is in the creating a dinner party bit. You tell give it a name and a date and tell it who you want to invite (whether through your contacts list or typed in manually), choose your three courses (you have the option of making your own thing but you can’t save your recipe to it) and away you go. You have the option of sharing the details on your Facebook wall although be prepared for the social consequences of not inviting certain people, obviously. 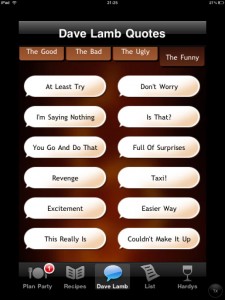 After the party it will stay in your device as a “party memory” – if you’ve got an iPhone, presumably you can associate pictures with it (I can’t test this out on iPad) but whatever, your guests are invited to score your party out of ten like on the TV show which may lead to some fun arguments, especially as it tells you who scored what. You can post the score to Facebook also.

The other main part of the package is the Dave Lamb soundboard, with 48 classic commentary quips at the touch of a button, which you can presumably have in the background as you cook to provide some sort of running commentary. HOWEVER, since upgrading to iOS 4.2, or connecting the app to Facebook, the sounds no longer seem to work. I do not know what the cause of this is, but it needs looking into.

It could probably do with more recipes, but the app seems to meet its aims fairly well – bug notwithstanding.