This would work quite well over here, I reckon. It’s an hour long (with adverts), and whilst I think that’s slightly too long really, there’s defintely a decent, Win, Lose or Draw-esque show in here.

The show seems to be based on a German board game called Activity, which going by this show is a little bit like Cranium. 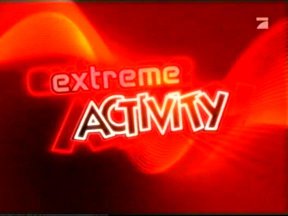 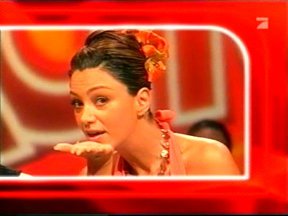 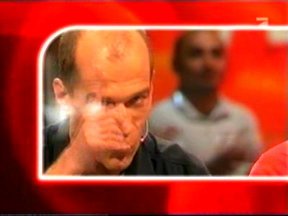 … against three celebrity guys in the ultimate battle of the sexes. 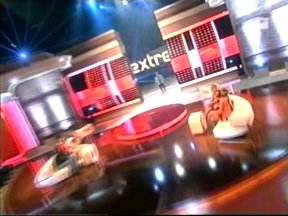 Here’s the main set. As you can see, the back wall opens up to reveal a large stage. In the main though, the contestants will be competing from the sofas and on the raised red platform in the middle there. 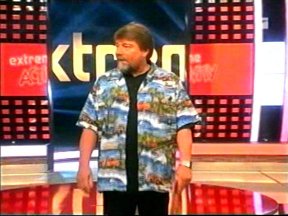 Here’s our jolly host, the man with the most German name in the world, Jurgen von der Lippe. 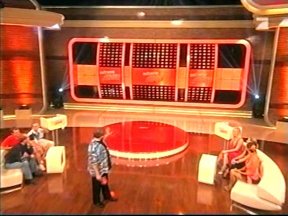 Here’s the deal. That back wall of screens acts as a slot machine. In turn, each player will press the button on the desk in front of them to start the slot machine spinning, and then again to stop it. Whatever symbol is showing determines the nature of the round they have to play.

We don’t know how “fixed” the machine is. During this episode, one symbol doesn’t make an appearance, and each team get an equal amount of “extreme”s, more of which later. 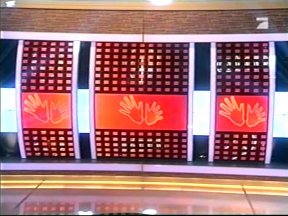 First game. The order contestants play in is predetermined, each team will get five rounds (so two team members will get to play twice) and then there’s the big finale.

This is just to show off how many screens are on set, really.

The contestant standing on the red platform must try and communicate words which will appear on that monitor in front of her guessing teammates through the medium of mime. For each one they get within 90 seconds, the girls will score one point. 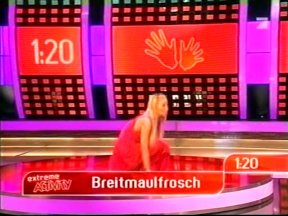 Here she is trying to communicate the word ‘breitmaulfrosch’, or “broad muzzle frog”, according to AltaVista. Definitely some sort of frog anyway.

The word will disappear from our screens after being up for a few seconds. The clock will also disappear, and reappear towards the end. The final ten seconds are accompanied by the sound of a ticking clock, ending in a big gong. 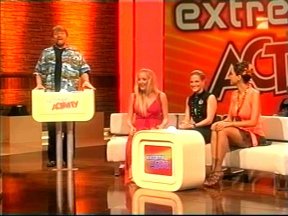 A shot of the stand Jurgen stands behind whilst the round is in progress. There’s one next to the boys’ settee also. 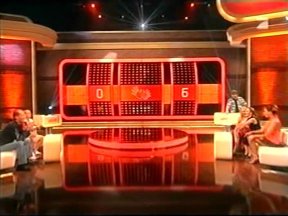 The girls got six words, so it’s six points! 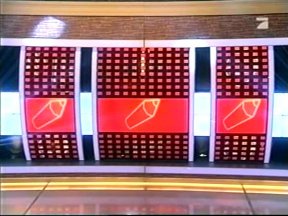 It’s the boys’ go next, and we can see that our contestant has got a drawing round. Again, because it’s a “normal” round, each correct word is worth one point. 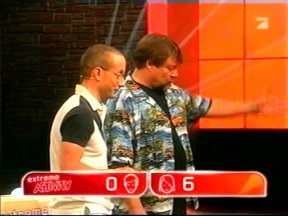 A graphical reminder of the scores. 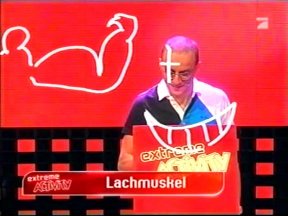 Here we go, ‘lachmuskel’, “laughter muscle”, apparently. And not “banana muscle”, as one of his team-mates calls out. We think one of the female players makes a rude joke at that point.

As you can see, all the drawings are done on a telestrator with the results overlaid on the action, a bit like you see in sports commentaries. His teammates are looking at a screen. 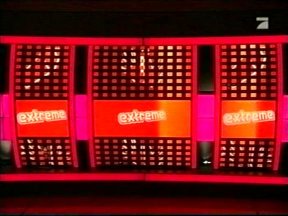 Uh-oh, the girls have spun “extreme”. That suggests the next challenge will be something a little out of the ordinary. The lights dim, sirens wail, and the slot machine slides away to reveal… 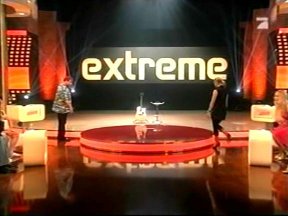 A guitar! And a stool. 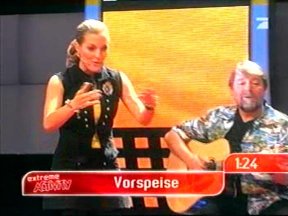 Yes, whilst Jurgen is going to play the guitar, our contestant must sing her clues to her teammates.

It’s not that extreme really, but each successful word in an extreme round is worth two points. 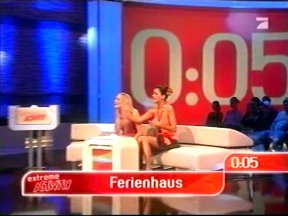 And here’s an extreme clock. 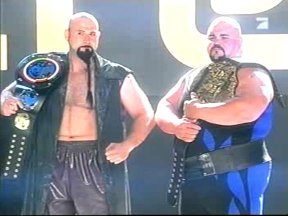 Boys turn now, and here are two big ol’ wrestlers from the Global Wrestling Organization. Just look at those biceps! 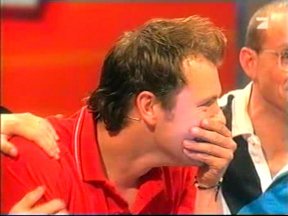 And doesn’t he look pleased! 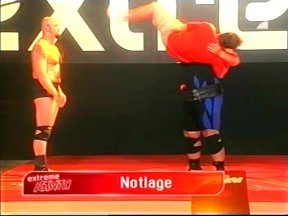 Yes, the poor man has to give clues to words whilst being thrown about by two wrestlers. He gets his shirt ripped at one point. 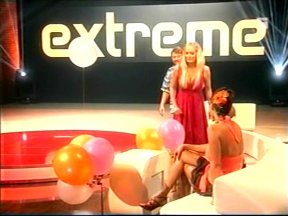 You get the idea of the show now, so we’ll move onto the other two extreme activites that take place in this episode (the symbol that doesn’t show up is a pair of lips, which suggests just giving clues to words I think, although that sounds a bit easy).

In this extreme activity, the contestant in the middle must give verbal clues to words. Not very extreme, I grant you. 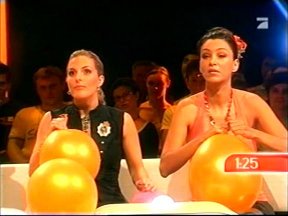 But our guessers can only make guesses after they’ve inhaled some helium from a balloon! 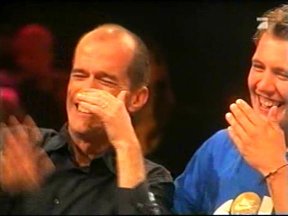 With the obvious hilarious consequences. 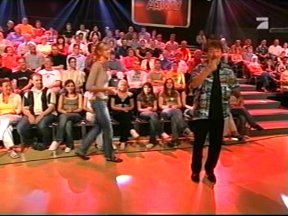 Tonight’s final extreme activity is a bit different, and he’s going to demonstrate with someone from the audience.

It’s a double pantomime really – he will pick one of the women from the other team and use them to help communicate the word by gesturing to her things to do.

Our audience member is paid off with a glass of (we think) champaigne. 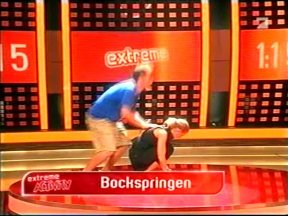 A bit like that. He tells her to get down, then he leapfrogs over her. 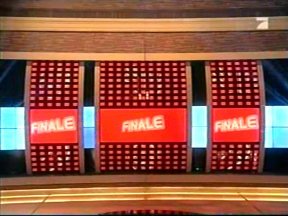 It’s time for the final round!

In this round, each team must pick one person to act as a guesser. The other members will act as clue givers. 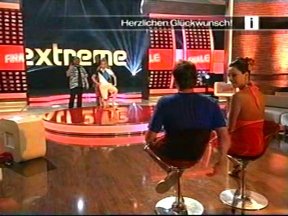 The clue givers queue up to give their clues, alternating gender. Whichever of the guessers correctly identifies the word first wins a whopping three points for their team. The clue giver then runs to the back of the queue. This round lasts for two minutes. 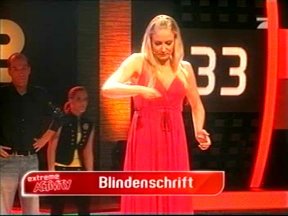 The scores are kept either side of the stage, as you can see. 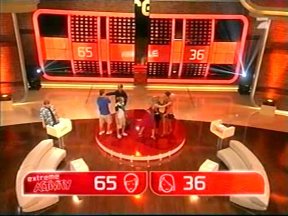 And it’s all over! And we can clearly see that the boys have thrashed the girls this week! 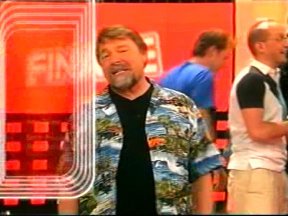 Goodbye and see you next time!

KP:
You’re right, it probably doesn’t need an hour. You could throw in one member of the public per team, and have them play a proper single-player endgame for a prize appropriate to whatever channel it’s on (I’d somehow sense this might work on Challenge or UKTV G2 actually, so that would be ‘a few hundred quid or a European holiday’ then).

Not a bad format, in honesty.