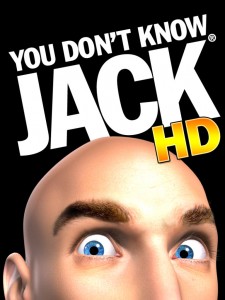 Regular readers of the Bar will know and understand that we’ve been big fans of the You Don’t Know Jack franchise since were were introduced to it in the mid-90s, with the cult British version starring Paul Kaye and written by popular student-friendly comics of the time. Whilst the UK one had some success, it evidently didn’t reach the dizzy heights of Germany (who produced at four domestic editions), and in the US the seventh conventional edition of Jack (not counting numerous spin offs and a TV show) has recently hit the shleves after a hiatus of almost ten years. And now it’s on your iDevice. 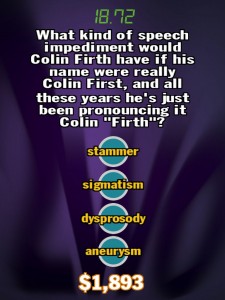 The iPad version of the game broadly sticks to the formula set out by the recent console releases – indeed, it has the same question segues from the console editions (although I’ve yet to come across any of the alternative ones that sometimes play out – they’ve already fitted quite a lot into 64MB really – and occasionally the uncrunching shows with the video elements with some short but nonetheless jarring gaps). You get questions, they are timed, the faster you answer the more you stand to win or lose.

What sets Jack apart from other quizzes is its clever question writing and it’s sense of humo(u)r. The latter we’ll get to in a minute. Jack is a test of your pop culture and high culture knowledge but rather than just ask a straight question the questions will often be dressed up to include both high and low brow elements and the very best questions will ask you to take what you know about one thing and apply it to a very different thing. And sometimes you’ll just need to know the latin name for something unpleasant.

Along the way you’ll get a special Dis or Dat question (sort the seven items into two different categories), and the Jack Attack word association end game (here’s a category and a bunch of words and some more words, buzz in when two words match that fit the category), which feels a lot faster and more difficult than it does on the console. Other special questions from the console version have also made the transfer (Who’s the Dummy, Cookie’s Fortune Cookie Fortunes with Cookie “Fortune Cookie” Masterson). Questions reference things that have happened in the last few months, and if you imported the recent console edition then don’t worry, the questions here are all new. Be warned that the questions are US-centric, whilst this isn’t a deal breaker you might be flummoxed by any sport that might come up. TV is less of an issue in my experience. 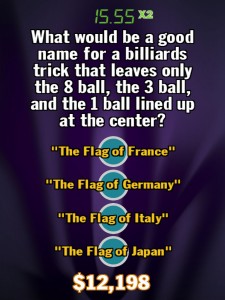 The other thing that makes Jack Jack is the humour which you’ll love or will find grating or possibly even both. The whole show is voiced throughout by Jack stalwart Cookie Masterson offering sarcastic commentary, self-deprication and fart jokes throughout. Get questions wrong and he’ll basically call you a twat. I would suggest, whether this is because of the speaker or not, he lacks a bit of pep in this release. It is quite American. However the fake adverts that play through the credits remain pleasing.

You get twenty episodes and each one has ten questions and an Attack – considering the boxed games used to go for £20-£30 back in the day and they had 600-700 questions, the 200-odd here represents good value. Whatsmore it sounds like more episodes and new features are coming – perhaps a return to the sorts of questions where you had to type in an answer? There’s no multiplayer for this game (which seems a bit odd given its original intention as a party game) but it does have online leaderboards through Game Center. There’s lots to like here.