Italy is quite an interesting place when it comes to television, it seems to be the testing ground for a number of new formats these days – the first place to show Take It Or Leave It, the first place to show Show Me What You’ve Got, the Italian version of Deal or No Deal defined the European daily versions. Maybe it’s because Italian television is famed for being rather bad it doesn’t really matter if it goes wrong, or something.

And now Celador have their own format over there… High Tension! Is this the new Who Wants to be a Millionaire? Short answer: no. 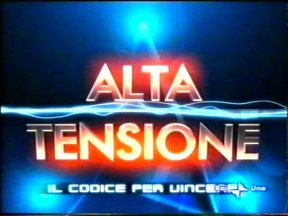 Electricity is the common theme throughout this show, because of its electric atmosphere, presumably. 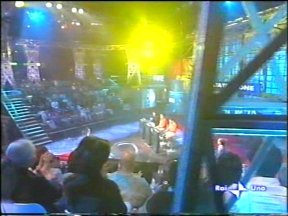 You’ll also notice an abundance of triangles, as triangles are also a common theme. 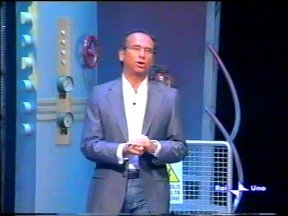 And here’s our host, Carlo Conti!

Under Italian law, there can be only four people designated as “gameshow hosts” in the entirety of Italy, and someone can’t become one until one of the old guard shuffle off. Special dispensation was given for Luna Park, which had a different host every-day on five day rotation.

We think that explains why we see the same people hosting every show, at any rate. 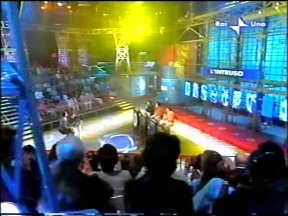 After a quick meet and greet of the three contestants, it’s time for the first round: L’intruso, which we reckon means “The Intruder”.

You might just be able to make out a zero in front of the furthest contestant. The amount of points a contestant has in the round is displayed on a large plasma on the front of their desk. 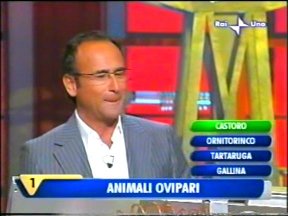 Each contestant gets five questions in this round. They are given four options and have to determine which one doesn’t belong. For each one they get correct, the contestant scores one point. 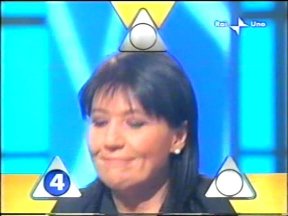 This contestant got four out five here, and is looking rather pleased. 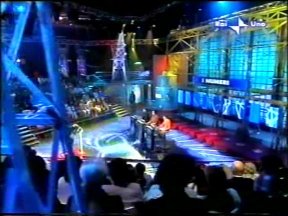 Round two is I Numeri. 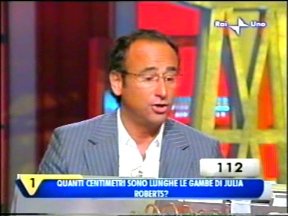 In this round seven estimated guess questions are posed. Each contestant has five seconds to lock in an answer. 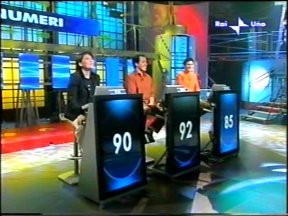 The person nearest to the answer scores one point.

These are the guesses to the last question rather than the amount of points they’ve got, obviously. 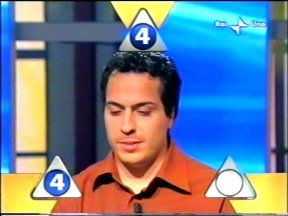 It’s very important not to just add them up to eight, for reasons that will become apparent. 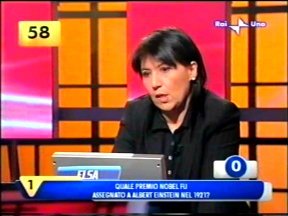 Round three is called “9 Volt”.

It’s your typical nine questions in one minute round. 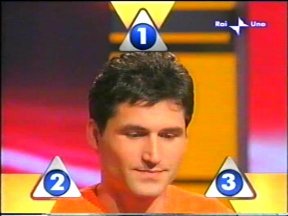 This guy hasn’t done too well, as you can see. 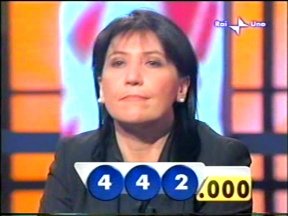 Each player must now determine their own fortune. They must rearrange their three numbers to make their own jackpot. The top prize then, evidently, is €975,000. 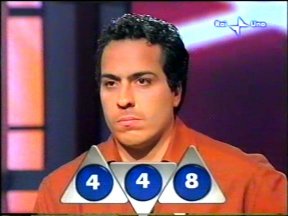 Why has he done this?

It’s strategy, as you will see. 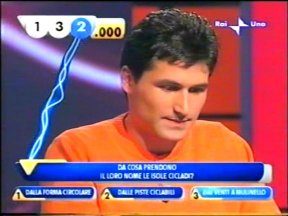 Each person now has to defend their jackpot.

This question for this contestant is keep the €2,000 in the game. As it’s the first question, there are only three possible answers to choose from. 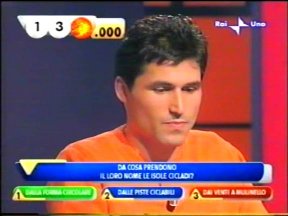 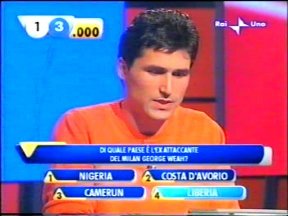 As you might have noticed, the thousands of euro column has disappeared – the most he can win now is €13,000.

The second question is to defend what was the tens of thousands column, now worth just thousands.

As you can see, this question is more difficult than the first one as it has four possible answers. 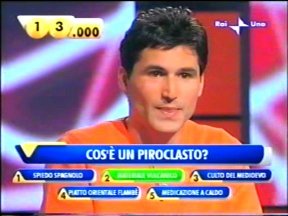 But he is successful. And he’s also successful in defending the first digit in this five-choice question, meaning he has a final score of €13,000.

Each contestant defends their jackpot in the same way, but only the person who finishes with the biggest figure can proceed to play for it in the show’s final. 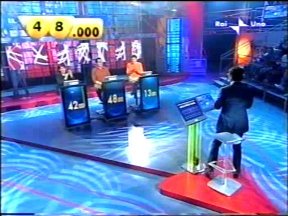 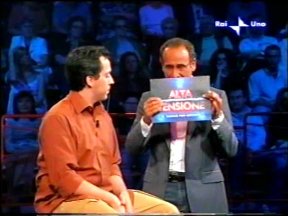 He now gets to play for the €48,000 he’s earnt over the course of the show, and all he has to do to do that is work out the secret nine-letter word hidden in the large envelope. 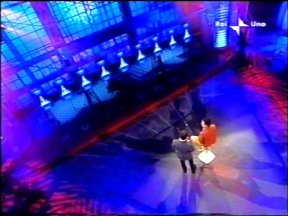 There are the nine screens. Behind six of them are money (the €48,000 split into varying amounts) and letters.

Unforunately behind three of them screens are lightning strikes, wiping out the bank completely. 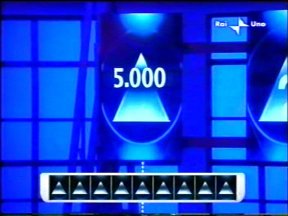 He is asked if he wants to reveal the contents of each of the nine screens in turn. He can opt to miss screens out if his instinct suggests there’s a lightning strike lurking, but doing so also means risking not making money and not revealing letters. 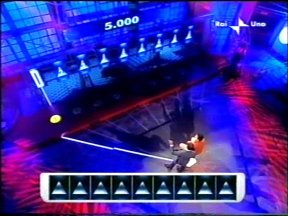 That’s the bank above the screens, by the way. 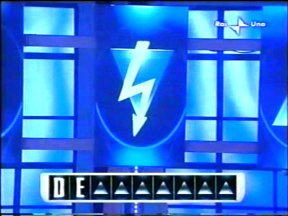 Not only does he lose all his money, but that letter will remain a blank anyway. 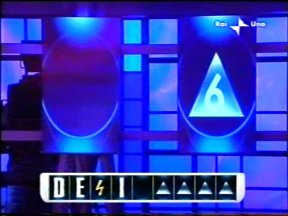 As you can see, he’s decided to blank out screen five.

In fact he has a bit fo a disasterous round all told, after all his decisions he only has a pot of €10,000. This round is absurdly against the player. 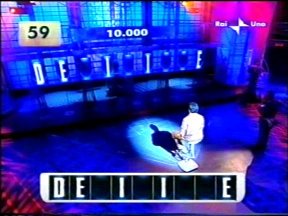 He now has one minute thinking time to come up with the secret word in order to win the €10,000. 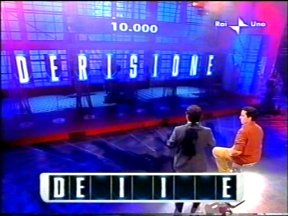 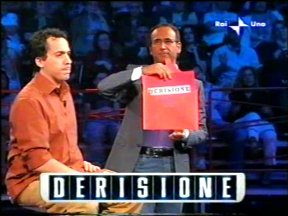 And there it is on the card. 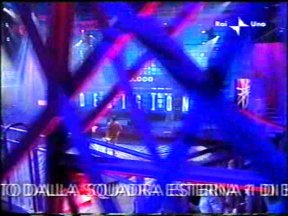 Well there’s seventy minutes of my life I’m not getting back.

theKIKO:
Funny, in Spain we have a show named “Alta Tension”, but that is our version of “Wipeout”, nothing to do with this one.

KP:
This seems to have a few good ideas but it probably doesn’t need 70 minutes. I do think ITV could get something out of this if they make a few tweaks, make it an hour and make the endgame more winnable.

Celador don’t do fast-paced shows, do they? Millionaire is hardly quick, but it works; People Versus was even slower and it was crippled; now this. (We’ll draw a veil over the daytime People Ver… GONG.)

Chris:
“Well there’s seventy minutes of my life I’m not getting back.”