Following the success of Family Game Night, The Hub has plundered Hasbro’s (who co-own the channel) back catalogue for board games to adapt for television. This is The Game of Life. 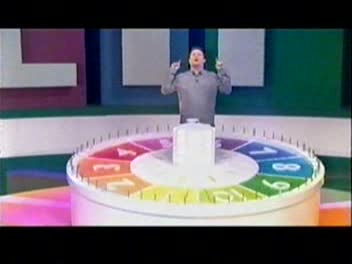 Jolly host Frank Nicotero (of Street Smarts fame) introduces us to the show in front of the iconic Game of Life spinner. 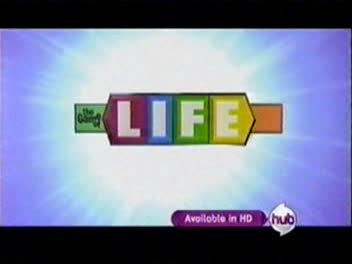 The titles are a Game of Life car driving along a number of madcap scenarios, of which we’ll see more of in a moment. 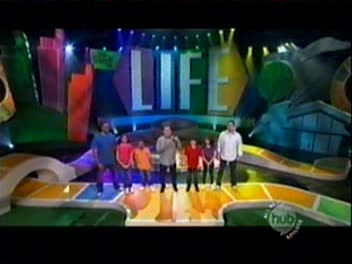 Here are our two teams. They will both compete in three ‘adventures’ to try and earn ‘lifepoints’. The team with the most lifepoints at the end of the game will play for a nice prize, a 3D home cinema set-up in this case. Teams consist of two kids and a grown-up.

Nicotero manages to avoid using just the word “points” throughout the entire show which shows a lot of restraint and talent. 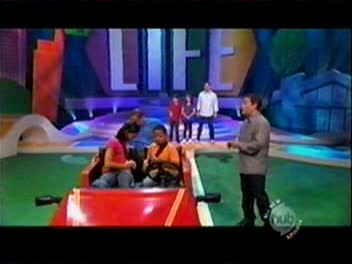 Each team’s first two adventures take place in the Game of Life car. 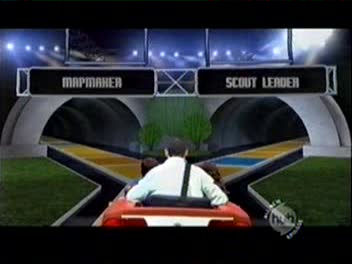 In the first adventure, the team must select a career. All the questions in it relate to the career. 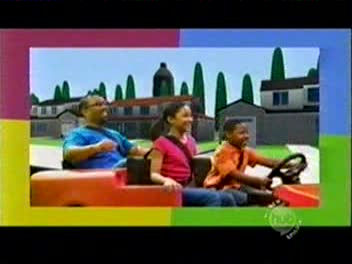 Career chosen, it’s time for the adventure! The car drives along down a number of themed roads – a carnival, the beach, a railtrack, that sort of thing. As the adventure progresses the actual car starts leaning and bumping, a bit like a plane simulation. The kid isn’t isn’t actually controlling the driving, but the steering wheel isn’t for show. 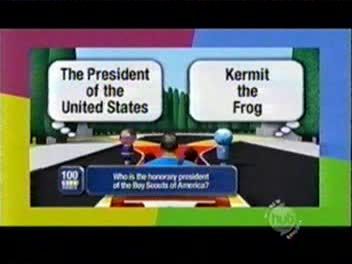 Along the way the road forks with a question. If you can’t read that, the question is “who is the honoury president of the Boy Scouts of America?” The team selects an answer by turning the steering wheel in one way or the other. It’s the President, by the way. 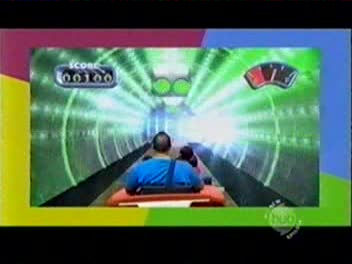 If they are right, the tunnel turns green and they earn the lifepoints on the odometer (starting at 100 then increasing by 100 on each subsequent question). 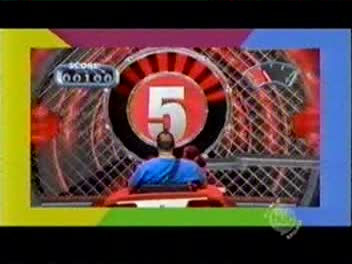 If they are wrong then the gate shuts on them and they are assessed a five second penalty. 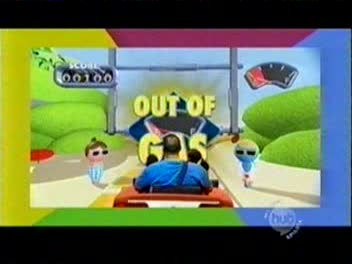 The adventure continues until they run out of “gas” – effectively it’s an 80-second time limit. There’s an unfortunate element of double jeopardy at play here, if you get a question wrong not only do you miss out on one set of points, but you’ll very probably miss out on a second more significant set of points later through running out of time. A clear run with brief discussion in round one should allow you to get four questions.

The other team gets to choose from the untaken career choice or a new third set of questions. 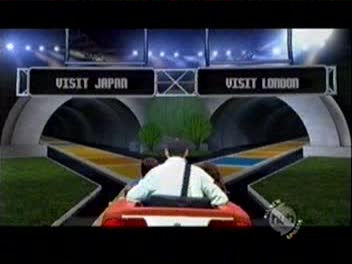 The second adventure takes a slightly different tack. Instead of choosing a career, you choose from connected but differing things – here we have “Visit Japan” or “Visit London”, in which case you get questions on either Japan or London, in another show there’s “Sing a duet with Taylor Swift” or “Visit the Queen”, in which case the questions are about Taylor Swift and The Queen respectively.

The questions are worth double lifepoints at this stage of the game – starting at 200 for the first one and an extra 200 for each subsequent one.

Whatsmore, the team with the most points after this round will get the chance to spin for a bonus prize. 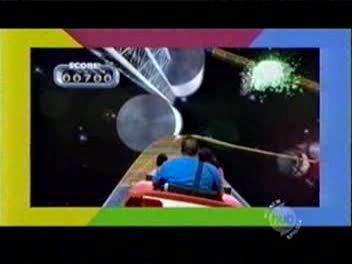 Here we are in space. The fuel gauge flashing means the next question is an “extra fuel question”, which gives the teams an extra 20 seconds if they get it right, enough for a shot at a very significant 1,000 lifepoints. 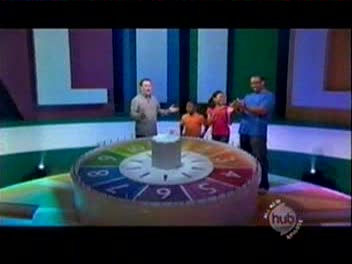 This team are in front at this stage so they’re spinning for a bonus prize – a hot air balloon trip. It’s a straight 50/50 shot, the team picks odd or even… 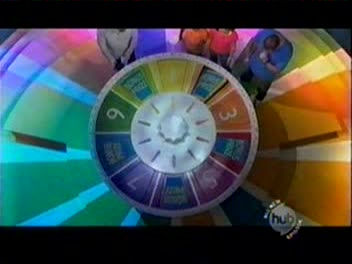 Here they’ve shosen even, and brilliantly the numbers flip over to represent the bonus prize. The kid team captain gives the wheel a spin. 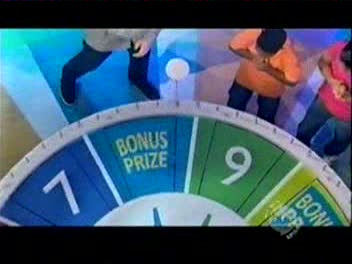 Unfortunately I’ve taken this picture a touch too early, but it finishes on 9. No ballooning trip, but nobody leaves the wheel empty handed, they win a very cool looking Pirate Dinner Adventure in California which is very much the sort of thing we probably wouldn’t do very well at in the UK. 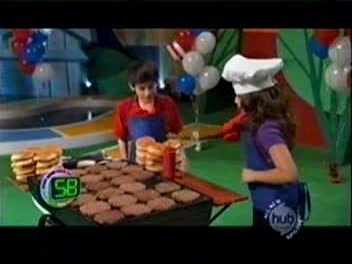 The final adventure is a physical challenge. Today we’re pretending it’s the 4th July celebrations and we’re having a barbeque. One person picks up a burger, puts it in the bun and adds ketchup. The second person wraps the completed burger in foil… 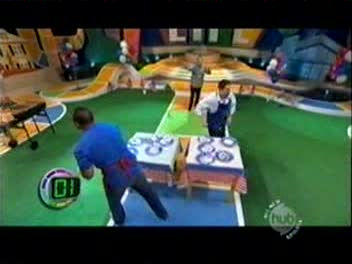 And throws it to the third teammate who must catch it on the plate and put it on the table. Dropped burgers don’t count. Each completed burger is worth 250 lifepoints. 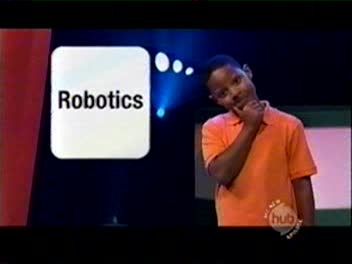 The team with the fewer lifepoints get “some cool prizes” and are elimited. The other team have the chance to win the evenin’g star prize back at the spinner. Once again they can have either the odd or even numbers for free, but they can increase their chances even more to potentially cover eight of the avaliable ten numbers.

During the break, each team member is asked a life question with two possible answers relating to each of the three adventures during the show – this question here is about scout badges. The other two team members try and predict the way the third chosen. Each correct match earns another number. The contestants have to do a “pondering” pose when their answer is revealed. 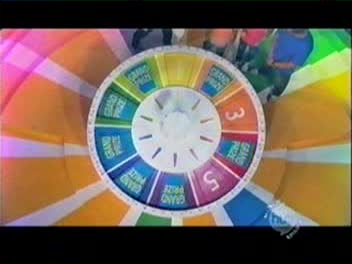 With two out of three correct, the team have seven numbers covered, the even numbers and 7 and 9. The wheel is spun… 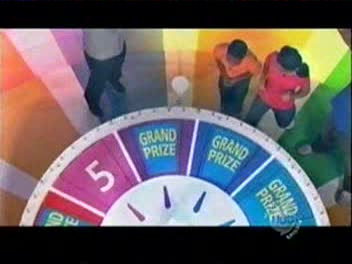