The Hub is co-owned by Hasbro and so they like to use their intellectual property to form the basis of their shows. And really, why not? Here is a show (very) loosely built around Scrabble (using the tagline “world of words”), which they’d probably have to call it Boggle Showdown if they ever made it in the UK because of the way Scrabble was licensed. 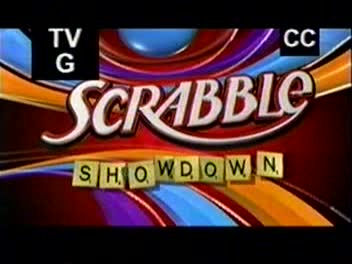 It’s Scrabble as you’ve never seen it before (i.e. not really Scrabble)! 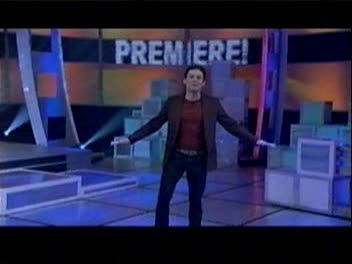 And it’s the very first episode look. This is our host the actor and magician Justin “Kredible” Willman. He is upbeat and a bit whiny and smartass. 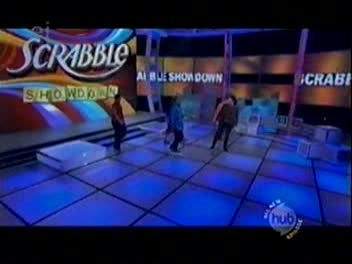 And here are our two family teams consisting of parent and older child. They are playing for a family holiday anywhere in the world they want to go. One team wants to go to London, the other to Bali. 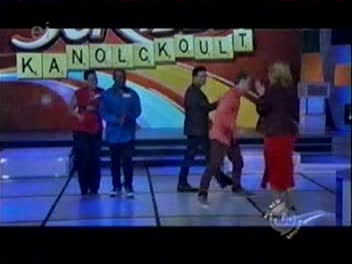 Four rounds are played. The first two are a perm two from five affair (I will show four, although the fifth, Speedword, I can’t find and was apparently only played once), Round three is Scrabble Flash, The all-important round four is Scrabble Lightning. In the first three rounds, the winners win a prize (cinema tickets, a keyboard, home entertainment package etc) and they win two bonus tiles to help in the final round.

Each game gets its own opening on the big screen, the first game this evening is Scrabble Knockout. 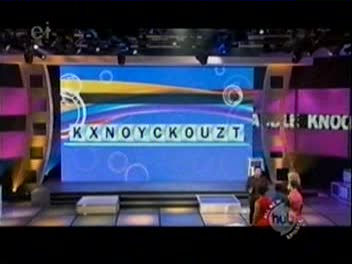 In each puzzle there is a word of up to eight letters but with three rogue letters mixed in. Here if you knockout the X, the Y and the Z… 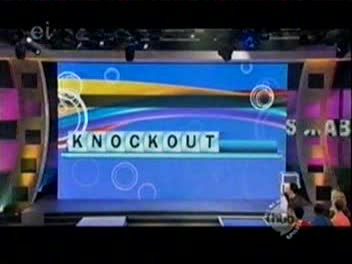 You’d get ‘knockout’, for example. 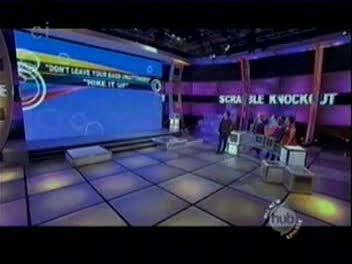 There are two categories, one team picks one the other team gets the other. In this case, “Don’t leave your bags unattended”, which is about things that are annoying in airports, or “Hike it up!” about things you might see on a hike. 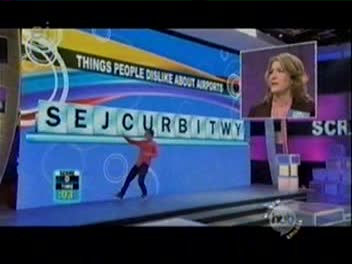 They must try and get five words correct as quickly as possible with a sixty second time limit – the first team’#s clock counts up. The parent shouts out “knock out the…” (J, in this instance), the kid runs along the screen tapping it to get rid of it. If the kid knocks out an incorrect letter, they can push the big plunger on the right to reset the word. This team do it in 51 seconds. 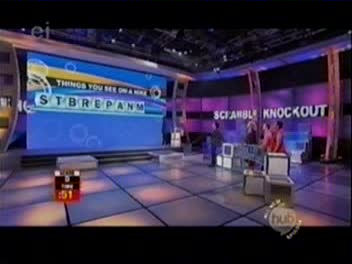 The second team’s clock starts at 51 seconds and counts down. If they beat the buzzer, that means they win. 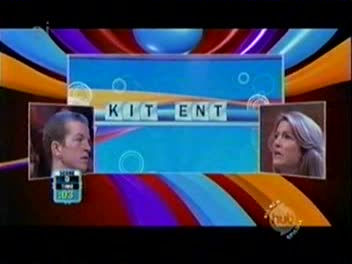 This game is Scrabble Scream, once again a race to complete five words in the fastest time possible. A word is split into two parts, the first of three letters, the second of three to five letters. The letters in each part are scrambled. The first person unscrambles the first three letters to form the first half of a word. The other letters are then revealed to their partner who unscrambles them and shouts the word out. In this example here, ‘TIK’ and ‘ENT’ becomes “kitten”. 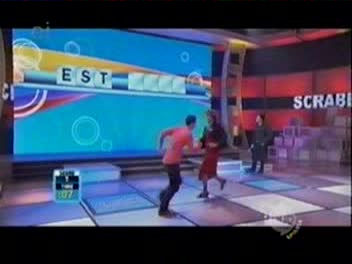 After each word the team swap positions. Again, the other team must try and beat the time set to win. 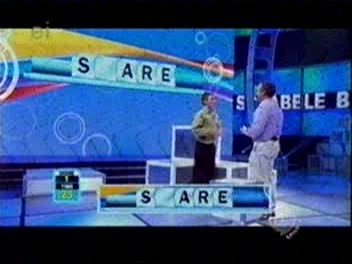 Jumping to a different episode now to show you the other two possible games, this is Scrabble Babble – the parent sees a word with a blank tile in it. The parent must work out a letter that goes in the blank then try and give clues to the word to their kid. The blanks are chosen so that there is usually a choice of words to go for, and any will do, although clues may not use a part of the word. It’s a race against the clock to get five words, beginning with a three letter one and increasing each time to a seven letter word. 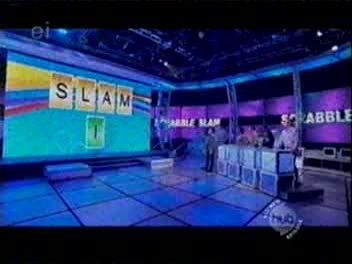 This is Scrabble Slam, it’s a bit like Chain Letters. A four letter word appears followed by a fifth letter. The idea is to slam that letter on top of one of the existing letters to form a new word. For example here by shouting “SLAM THE A!”, the I would go on top of the A to form “SLIM”. The families are mixed up here to begin so that each team plays alternately. The team with the last person standing wins the round. 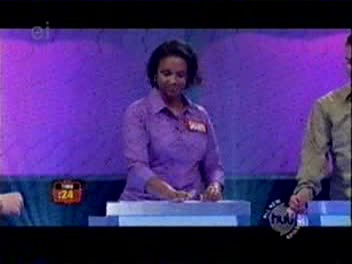 To begin the round the clock for the game is randomly set between (it looks like) 15 and 30 seconds, the player at podium one slams the button to stop the randomly flashing clock. The viewers at home can see the clock, the contestants cannot. 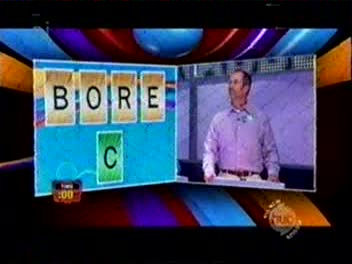 Because the contestants can’t see the clock, the best way to play is as fast as possible because the person in charge when the clock hits zero is eliminated. There is always a word to be found, unfortunately this gentleman got the buck passed to him just as time was about to run out.

Back to the original episode now and round three is always Scrabble Flash. 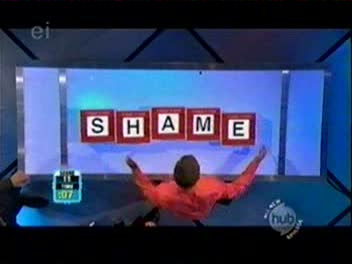 There are five cubes each with a letter on. The object is to move the cubes to form words of three or more letters (they will flash green when this happens) and they score a point for each letter in the word. Each team gets thirty seconds to score as many points as possible alternating between parent and child. Both teams will get the same five letters to play with, so the second team will be backstage whilst team one plays. There is always a five letter word possible. The team who scores the most points wins the round. 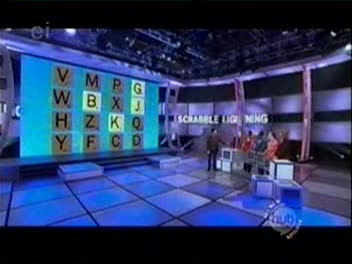 The final round is Scrabble Lightning and is probably the closest the game actually gets to Scrabble. To begin, the teams bonus tiles they have won from winning the first three rounds are converted to a points headstart – there’s a board of 16 tiles which will flash randomly. Team one won two rounds and has four bonus tiles and so will hit the button to stop the flashing four lights. The value of the tiles they stop on will be their initial score. The other team then does the same thing with the two tiles they have won. 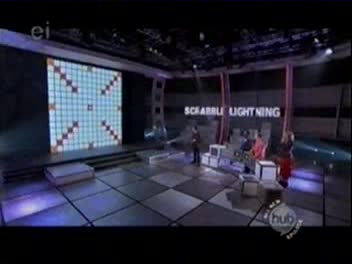 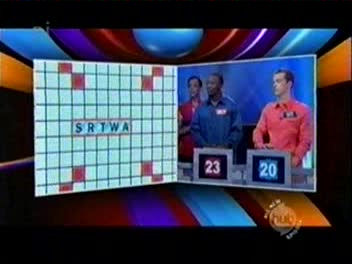 For each word the letters are put up on the board in a scrembled order. A light cryptic clue is read out (in this instance “you’re a sucker if you use it”) and the first to buzz in with the right answer scores the value of the word (it’s “straw”, by the way) and the word is put on the board unscrambled. Team members switch after each clue. 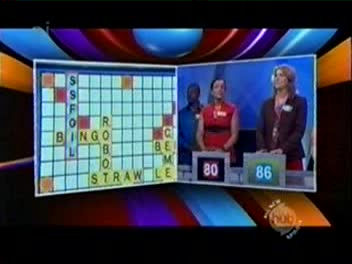 Words are played off of other words (contestants don’t get to decide which letters are played off, the board and clues are set for them) and there’s a natural increasing of the stakes when the clues start going over multipliers more regularly. The aim is to accumulate 100 or more points, the first team to do that wins the holiday they wanted. The clue here is “paeleontologists dig this” – the answer is “fossil”. 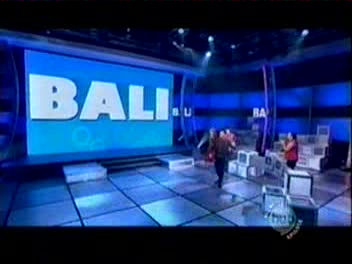 And they’re off to Bali! Congratulations.