This show caused a fair bit of controversy in the (brief) time it was on. See if you can work out why. 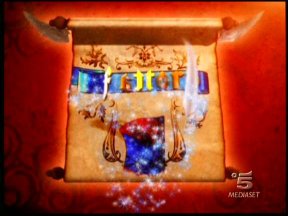 The very medieval and magical title sequence, with the scroll with wings and magical quill.

It’s already quite a scene setter.

The title means “Factor C”, by the way. But you could probably guess that. But what you might not realise is what it relates to – “avere culo” – to have ass – apparently an Italian idiom for being bloody lucky. 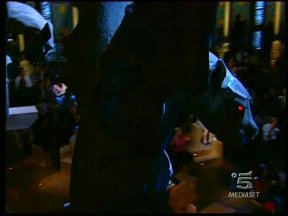 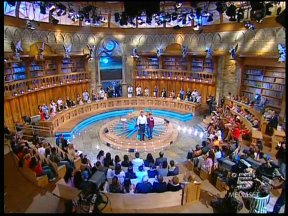 Let’s not beat around the bush here, this is a magnificent set.

The set-up may look quite familiar.

Our host (in the middle, with the contestant) is popular host Paulo Bonolis who was the original host of the very important and influential Affari Tuoi. 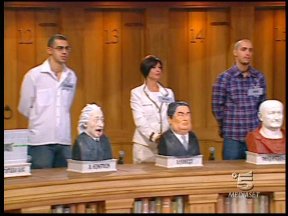 As you can see, each contestant has a bust of a famous person (or occasionally, thing). Each bust has a prize hidden inside it.

We’re not sure how this works, we’ve read that there are over 80 busts available. Do contestants pick from all the busts available, or are twenty prepared before each game? Do write in and let us know. 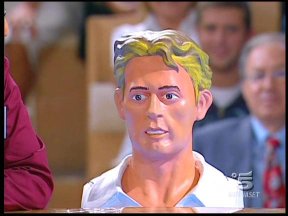 It looks like our contestant is pre-selected before the show begins, wheter it’s at random or whether they just go through them numerically we don’t know. 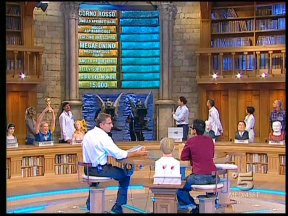 And here are today’s lower prizes. Many of them are actually quite good, and ending on €15,000 down the bottom. 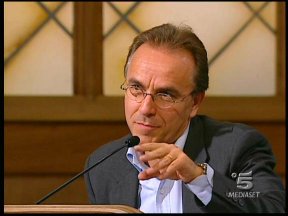 Here appears to be the producer guy, explaining some of the prizes. 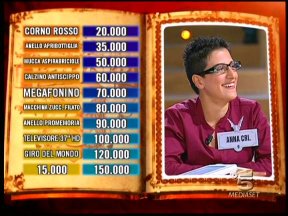 These prizes change on every episode, the top prize available is €500,000, which is why we wonder if selection of prizes is down to the contestants each selecting their own bust. 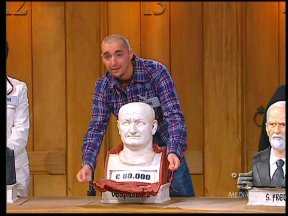 And so the game begins. In the first round, our contestant has six busts to reveal.

The selected guardian pulls the strings at the back to lower the front. €80,000 isn’t a good first pick… except as you will find out, actually it just might be. 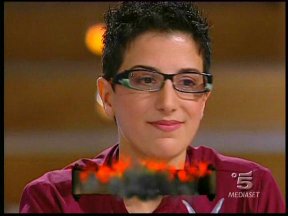 This accompanied by thunder, and the studio lights flashing very briefly. 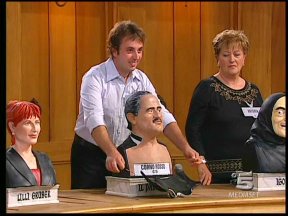 One of the smaller prizes, its value is written on the front (€5 in this case), for reasons that will make sense at the end of the show. 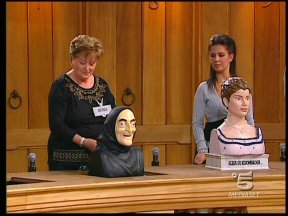 After their value is revealed, the bust sinks into the table, and the player leaves through the door behind them. 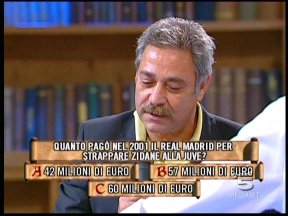 After six boxes, I mean busts, the player gets a chance at an offer.

But to get an offer, first they must answer a question correctly. The contestant picks one of the busts still in the game, and a question is asked about that person.

For some reason, a member of the audience is present to ask these questions. Here is a question on the footballer Zidane. 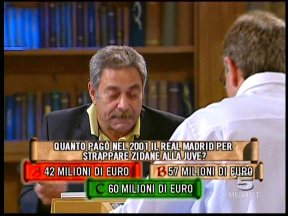 Unfortunately she is incorrect here. So she gets no offer, and must play on.

It is five boxes in the next round. 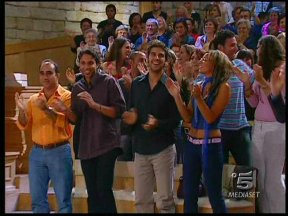 They play upbeat pop tunes into the studio after certain busts get revealed. 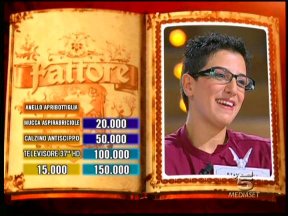 Here’s the board at nine busts, and it’s time for the second offer. 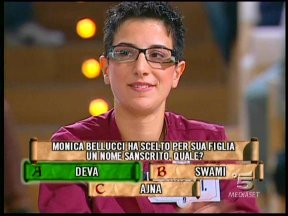 She gets the question right!

That means she now has an opportunity to leave the game. 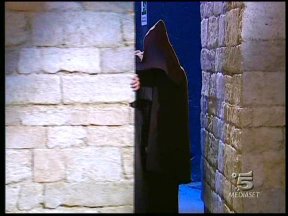 So now, a man in a monk costume pulls back a wall and limps across the studio… 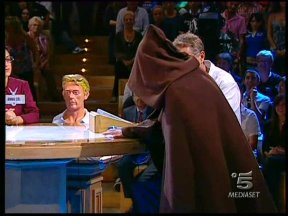 … slams a bit of paper with the offer scribbed inside with biro, and limps off the other side. 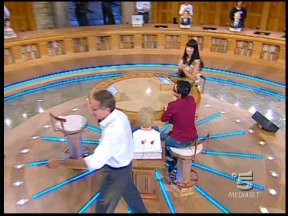 Four busts in the next round. 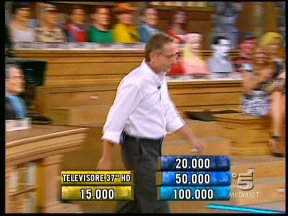 And it looks like she’s doing OK. The lowest valued prize left is a 37″ high-def TV. 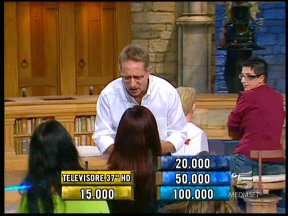 Some pretty girls come down from the audience and ask if they can ask the next question (on how many brothers Romano Prodi has).

Which are contestant gets wrong, so no offer, and now she must open three more busts. 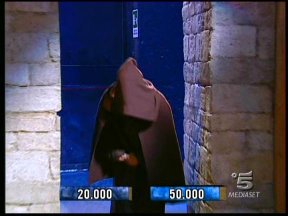 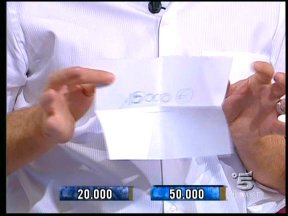 If that’s got your head scratching, consider this: the big rule is, she only gets to keep what’s in her bust if it is the larger of the two final prizes. If she opens her bust and it’s got the €20,000 in it, she leaves with a consolation €2,000, I gather.

Apparently, if the two prizes left are below the €2,000 value, you want to make sure you win the consolation prize!

Meanwhile, the theme from Twin Peaks plays in the background.

She declines the offer. 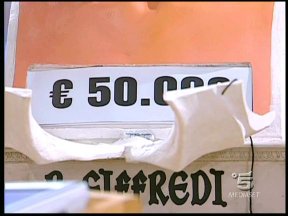 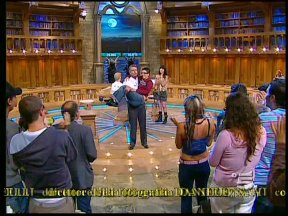 The theme from Superman starts playing, and please join us tomorrow!