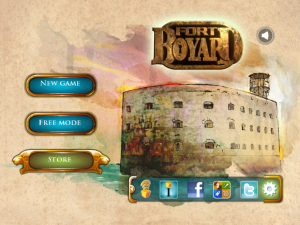 Because 90% of the app involves doing one (or sometimes in a surprise twist, TWO, but not at the same time) of the above.

And it’s a shame it doesn’t have any more ideas really because they’d be an acceptable package here if it did, as it is it feels rather sleight. It emulates a (short) episode of the show fairly well and it does so with a rather charming art style, hand drawn and watercolour-y, heavily remeniscient of the Professor Layton series.

You pick your length of game (Short or Medium, Long is locked) and your choice of difficulty (normal is frankly not difficult). You choose a team (each rated on strength, agility and fear – your brain power is your own). You spin a disc and make your way round a sort of board-version of Fort Boyard playing a game when you get to a square. These are split into games of agility, games of strength, games of fear, or riddles. 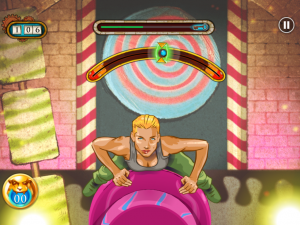 These vary in terms of quality and there is a choice of nine. Most can be boiled down to correctly performing a repetitive action as fast as you can until you fill a progress bar and as such what’s happening on screen is largely an irrelevance. Sometimes for no discernable reason you’ll be required to get your power bar to a certain point which moves every few seconds in order to progress which in many cases isn’t actually any fun at all. The handbike and the cylinders are probably the examples of the games that work the best. At the very worst you get games like rope climbing which require you to stop and take a breather every so often (because of “stress”) but if you do you lose everything in your power bar anyway so you might as well just go for it. And then there’s beam jets which involves quick tapping AND timing, but your bloke is so slow you might as well just iterate your way to the end. Some games require playing a short Simon-esque memory game, for no discernable reason.

Games of fear. One is a hilarious reimagining of the spiders and scorpions game from the TV show (without the scorpions) where spiders scuttle across the screen and you just pick them at random until you find the ones with the slips of paper underneath them. Every time you pick a wrong spider you get more “stressed” until you get too stressed and get a time penalty. On the plus side, you get to spin some dials to unlock a combination lock like on telly. On the minus side, you have to spin the dials counter-intuitively (swipe up to go down a number). The game with the rats is a bit better as it involves some skill, tap on a rat when it’s looking down to move it. If you pick one looking up at you there’s a time penalty. And that’s it.

There is no Father Fouras or equivilent in the Engliah language version of the app. There are four different kids of visual riddles that might turn up – work out how many smaller cubes would be needed to complete the big cube, work out which one of three dice fits the opened dice shape, work out which key fits the lock, work out which piece doesn’t belong in the puzzle. In the main these are fairly successful although it’s a shame they are no more interactive than a multiple choice quiz. 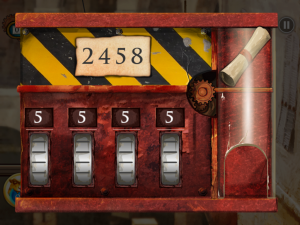 You can’t become imprisoned in these games. However for every key you don’t get first time (that you don’t fancy playing a joker on for a redo. Which you have to earn or worse buy with actual real money) you play a make-up game where you WILL lose a player if you don’t win – not unlike Judge Blanche but much lazier.

Then it’s the adventures. There are only four of them and they work in the same way as the key games (i.e. they’re of variable quality), except if you win these you win clues for the treasure room.

Then it’s on to the Masters of Time to win additional treasure room time, 15 seconds added for a win, 15 seconds off for a loss. And these are not hard games – pairs, rock scissors paper well (and thanks to the app for revealing the rules to this), sticks and awalee (which turns out is the coloured ball memory game). The latter is the most successful. These Master of Time apparently rubbish at strategy even on normal or hard.

Finally it’s time to attack the treasure room. First you need to solve the codeword with the clues collected (these are not wildly difficult in the main, in the games I’ve played I’ve cracked it and typed it in within ten seconds), you can make sacrifices if you need to and you even get three guesses. Codeword cracked, collecting treasure is a very simple management game – boost your players running back and forth by tapping on them, but if you boost too much you have to sit out for a few seconds. Sounds like a boring way to spend two minutes, actually… well actually there are worse things I’ve done.

And that’s basically it. You can play already played games in free mode, or you can unlock games, better teams, the Long game and such like with the Boyards you’ve collected. Or – of course – you can spend actual real cash money buying them.

If you’re a fan of the show you should probably wait for it in a sale, otherwise if you want This Kind of Thing, The Crystal Maze packs a lot more variety into its frame despite having fewer different challenges in it.

One thought on “iPod: Fort Boyard”