Whilst we’ve never got overly excited about straight quizzes at Bother’s Bar, we’ve always got time for quizzes with a bit of a devious streak. Belgium seems to be a hotbed of such quizzes, and have also seem to have perfected shows which seem quite laid back and fun whilst also being quite clever and competitive (still waiting for that UK version of De Slimste Mens!!!). Twee Tot de Zesde Macht is the latest sophistiquiz that’s caught our attention, and whilst it isn’t all amazing, there’s enough going on to warrant a feature. The show is in Flemish and the series runs for 13 weeks, it’s rating very well. 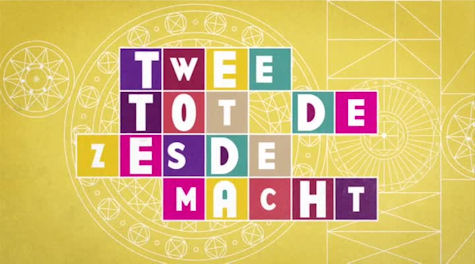 In English it translates directly as Two to the Sixth Power. If there was an English version though, it’d probably become Two To The Power Six as it’s a more snug fit for one of the show’s central conceits. 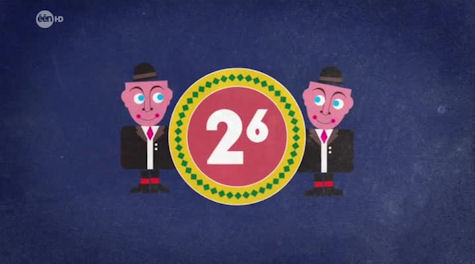 The show has got a very distinct artistic direction – things made up from bits and crazy contraptions. 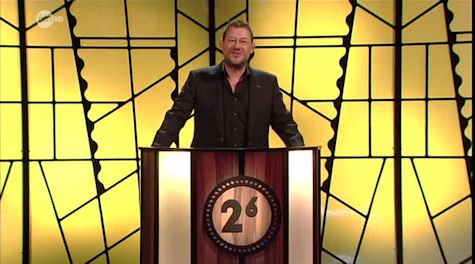 Our host, the producer and comedy writer Bart de Pauw. Whilst you might not have heard of him, you will certainly be aware of some of the shows he’s been involved in – he’s one of the creators of one of our favourite ever shows De Mol. 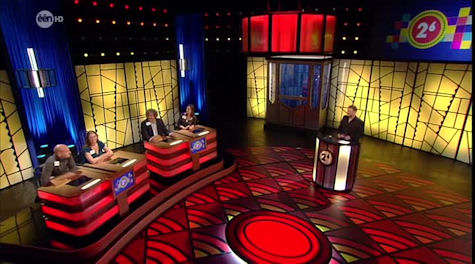 Our two teams of civilian contestants. Each team consists of two people with an existing relationship. They are competing against each other for €10,000. But that’s not all… 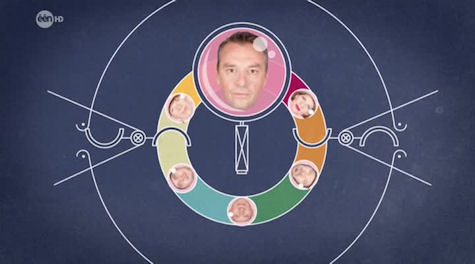 …because they must also face two of the Power Six – six celebrities playing across the series on rotation. 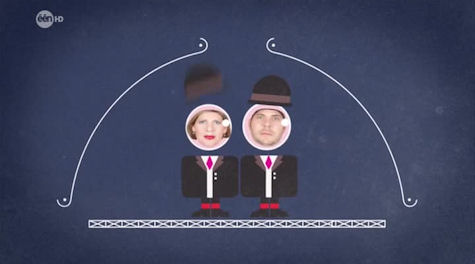 It’s these two this week. 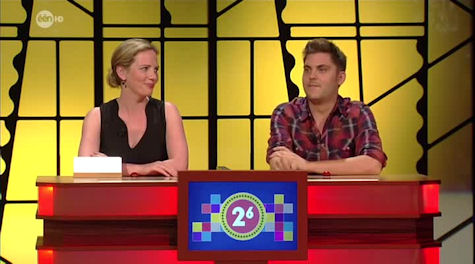 The celebrities are playing for charity. Every time they win the show, the money they earn goes into a pot that will be played for at the end of the series. However, it’s important the celebrites do as well as possible because their individual performances across the series will determine the teams in the final episode. So it’s in their interest to play as hard as the other contestants! Their desk is opposite the civilian contestants. 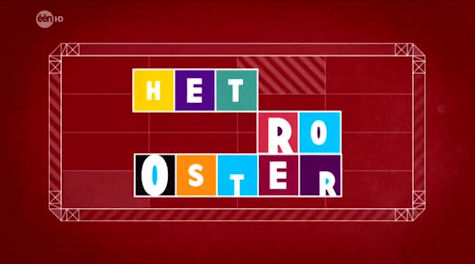 Each round is introduced with a short animation. Round one is Het Rooster – The Grid. 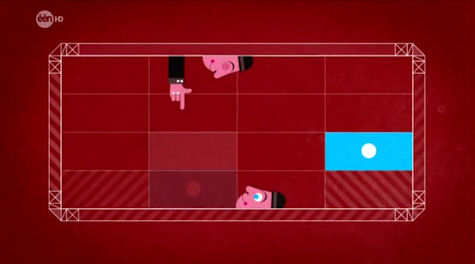 Another example of those graphics. 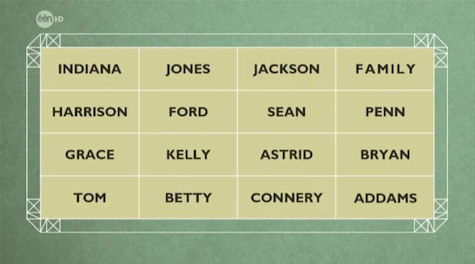 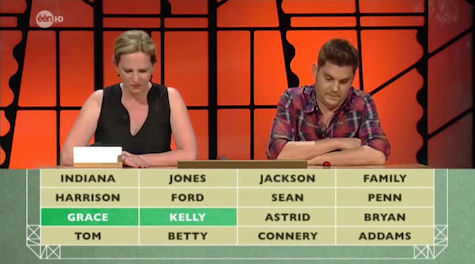 A question is asked and it’s first on the buzzers. A correct answer scores 100 points. The answer here is Grace Kelly, so far, so easy. 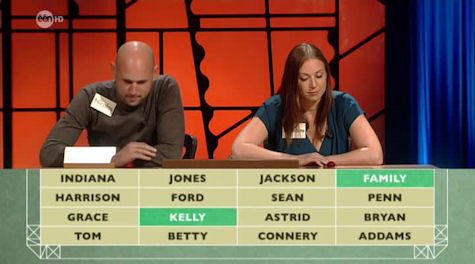 Natrually things start to get a little more interesting. Each answer may be in one or two boxes, and they don’t need to be next to each other. There are ten questions in this round. 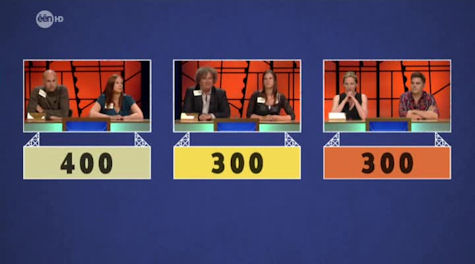 And here are the scores. 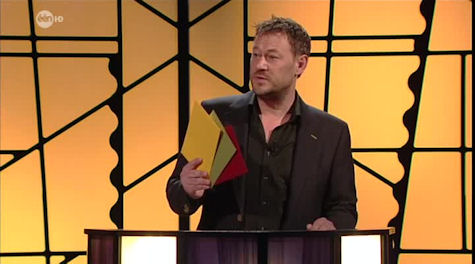 Round two is De Vier Antwoorden – The Four Answers. Each team picks one of the three coloured envelopes, inside each of which are seven questions. 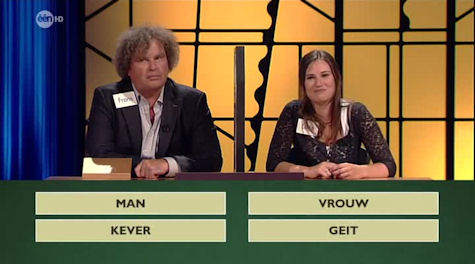 These are the four possible answers to each of the questions, each one worth 100 points. HOWEVER, the privacy panel has slid up between them so they can’t communicate with each other. Whatsmore, each player is only responsible for the two answers in front of them. When the question is asked, only one of them must pipe up with their correct answer. For example, if the question is “what gender is the author of Frankenstein?” the female must say “vrouw” – woman (it’s Mary Shelley) to get the points. They can’t both shout out an answer. 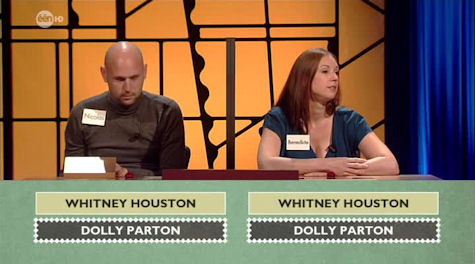 Round three is Dubbel Juist – Double Right. Eight fifty-fifty questions are asked, each worth 200 points now. It’s first on the buzzer, but to buzz in the person on the left of the picture must silently touch one of the answers on their screen. Once they’ve selected an answer, their teammate (who still can’t hear or communicate with their partner) must give their answer orally. If both of them are correct then they get the points, if not then it’s thrown open. 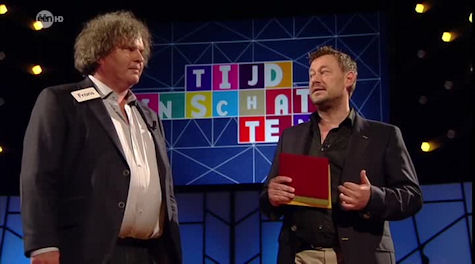 The final round before a team gets eliminated is Tijd Inschatten – Time Estimate. It’s a solo round against the clock. Bart reads out the list of three categories, and the the contestant picks an envelope without knowing what category they’re picking. 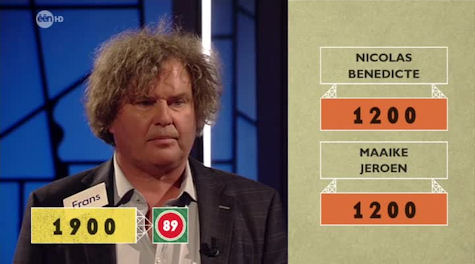 They then have 90 seconds to answer as many questions as they can on the subject. Each question is worth 200 points. However, every time they pass or give an incorrect answer, five seconds is immediately knocked off the clock.

They MUST end the game before the clock hits zero (by saying “stop!”) or they will lose all the points accumulated in the round. Unfortunately their back is to the clock and their teammate, so they must try and keep track in their head.

The team with the lowest score at the end of this round is knocked out. 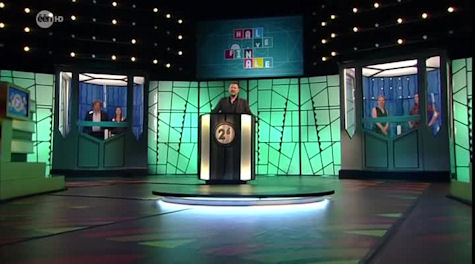 The two remainng teams go through to the semi-final. The winners will go forward to play for the episode’s cash. Teams have been put into soundproof booths so they can only hear Bart the host and not each other. 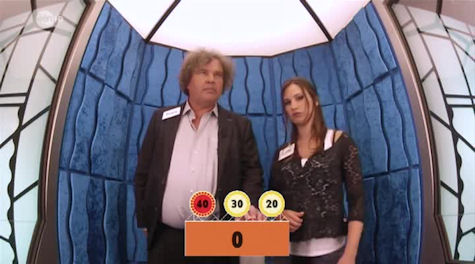 The game is pretty simple – Bart reads out up to three clues to a thing, the first worth 40 seconds, then 30, then 20. When a team wants to go for it, they buzz in – this team have buzzed in after one clue here. When they give an answer, the other team can still hear the remaining clues and buzz in as appropriate. The first team to accumulate 150 seconds is the winner. Going over does not confer a bonus, although presumably if both teams do it on the same question the higher score will win.

Whilst I’ve reduced the round to two screenshots, there’s a lot of discussion so it goes on a bit – 15-20 minutes! The first four rounds seem quite clever, so it’s a shame it feels like it loses its way here a little. 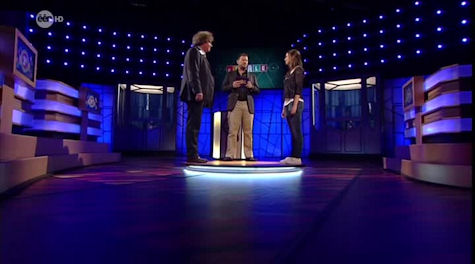 Those 150 seconds will be used in the Final. 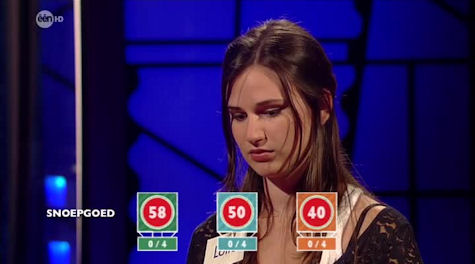 They are given three categories, and they must choose who will answer the questions in each category.

The 150 seconds have been split into three pots of 60, 50 and 40 seconds. Each one for one set of questions. The contestant must fulfil a quota of four correct answers within the time to succeed. If they do not, then the unanswered questions will roll forward to the next category. However if they succeed in a category, the unused time DOES NOT roll forward. 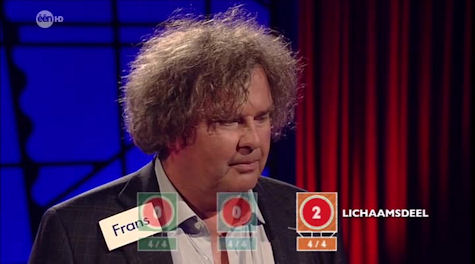 If they give all twelve correct answers before the last clock runs out they win €10,000 – otherwise they leave with nothing. 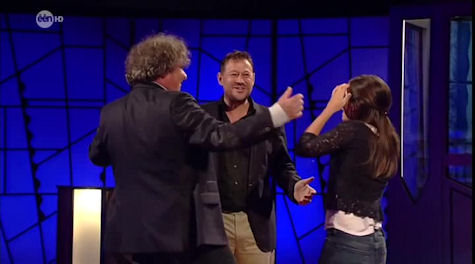 But they do! Just! Well done them.