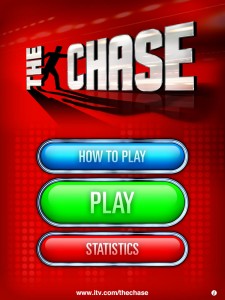 A good telly quiz tie-in app just needs to make an effort in simulating the experience of being on the television show. Everything else is basically bonus.

The Chase app doesn’t really have much in the way of extraneous stuff. Happily it makes up for it for being a damn fine interpretation of the TV show, albeit without the real money.

And more multiple choice questions. One of the nods to quickfire mobile gaming is that all of the questions are multiple choice rather than most of them being open-ended like they are on television. Frankly not a dealbreaker, although you do get the odd question that relies a bit too heavily on the multiple choice process of elimination to supplement difficult questions (these are usually in the Blockbusters “What ‘X’?” style). 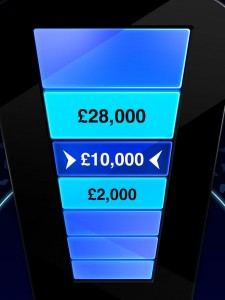 Still I don’t really want to criticise because if you like The Chase you will pretty much love this app, and if you like quickfire quizzes in general you’ll take a lot away from it. The game is for one to four players and it works just like the show, each contestant individually tries to put money in a communal pot then they all try to win it. It follows the show’s standard template and rules (Cash Builder (one minute to build your score), The Chase (choose where you want to start on the grid, answer within five seconds of the other), repeat as necessary, Final Chase) and also features the four Chasers, each of whom have about five or six different faces they could pull at any moment. No Bradley, though.

The Final Chase is not on the buzzers, everyone still in the game must either jab at answers at the same time or shout out answers to someone to press the answer with. The second half with the Chaser, despite the fact that it’s effectively two minutes of the app playing itself, is surprisingly tense even without the real cash. This is helped along by having the real exciting music and sound effects from the show. It is here that another one of the non-dealbreakers shows up, it’s a bit of a shame these questions don’t seem to have been asked of The Chasers themselves and it’s seemingly just a probability algorithm to determine which of the hidden wrong multiple choice answers they’ll go for when they’re deemed to get a question wrong, so you’ve not really beaten The Beast. This being said it should only ruin your experience if you let it – the effect is sometimes quite jarring but the game is still exciting. 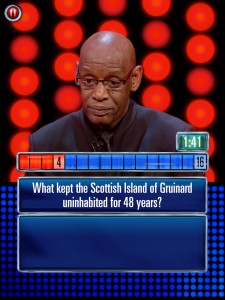 It also keeps track of your individual wins on the leaderboard.

There are plenty of questions, I’ve had a few repeats but the app is promising lots of free new ones. Also playing on my iPad for whatever reason sometimes the game will load without the tunes – sound effects fine, no BGM. That sorts itself out after a hard reset. Also it’s been bought to my attention that Anne Hegarty never seems to come up as the Chaser, don’t know if it’s a bug or general unluckiness of me and other people I’ve chatted to or what. Still, though.

2 thoughts on “iPod: The Chase”