Love and marriage, so I’m told, go together like a horse and carraige. Traumhochzeit (“Dream Wedding”) features very little in the way of horses, but has a lot of love to go round, as well as a couple getting married.

The show ran from 1992-2000 in Germany (with a special made in 2008), and the original show Love Letters was produced in The Netherlands between 1990 and 2005 before John de Mol started up Talpa taking Linda with him. Linda de Mol hosted both of these versions.

Of course, the concept was tried over here in the UK as Love Me Do (nee The Shane Richie Experience) although it didn’t capture the public’s imagination in quite the same way it obviously did in Europe. 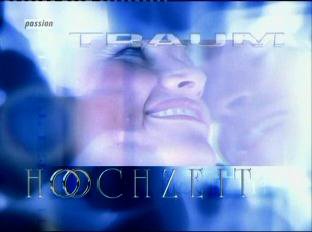 Unfortunately our tape cuts off the title sequence, so here’s a screencap of a sequence used between couples. 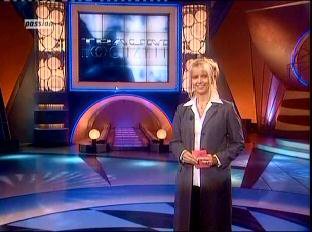 Here’s our host Linda de Mol about to introduce one of tonight’s three couples. 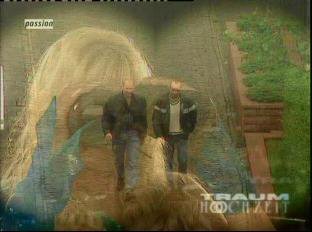 This is done by way of secret-camera. One of each couple is in on it, and the set-up is to surprise the other one. Here the bride is about to surprise her husband-to-be. She is dressed up as a mermaid up a lighthouse, for some reason. 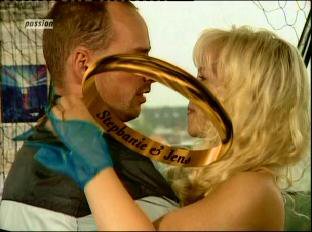 And well, he seems to have agreed to it! 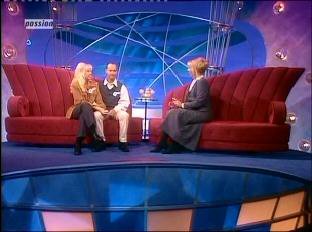 Each couple gets a chat on the sofa with Linda, including a Blind Date-esque ‘here’s what you told us about your partner in an earlier interview’ segment. 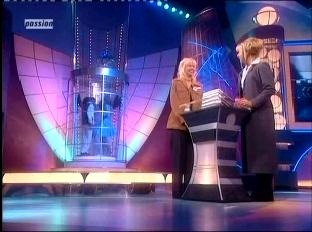 And it’s on to game one. Here Stephanie is going to be asked three questions each of which requires three answers, and she has twenty seconds per question.

Meanwhile her partner has to dance with a dancer in the soundproof booth in the background. 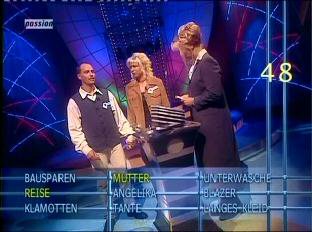 Jens is given all three questions up front and now has one minute to try and match as many answers as he can. The clock drops down the screen a bit every ten seconds. 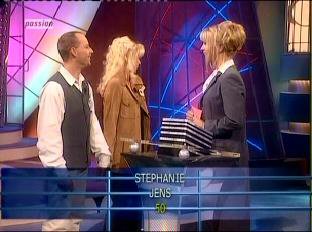 He matched five, at ten points each that’s 50 points. Points are important, because the best scoring couples earn ‘jokers’ for the next round. 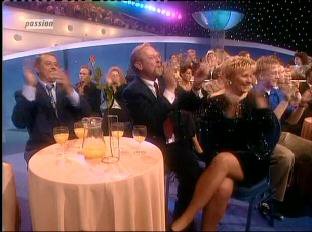 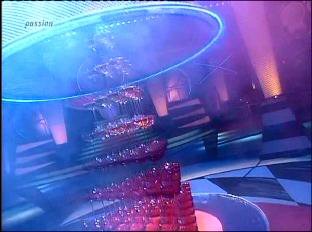 The champagne tower. This will decide which of the three couples will get eliminated at this stage. 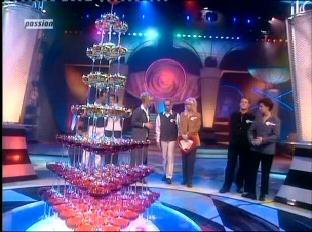 It’s basically Jenga, but only with those white wine filled top levels. Couples take it in turns to remove one of the glasses from the tower. As you can see, one of the couple is holding a heart filled with money – that is a Joker. If they play it, it means they can skip their go. This is important as the couple who knock the tower over get eliminated. Presumably if they don’t use it they can keep the money. 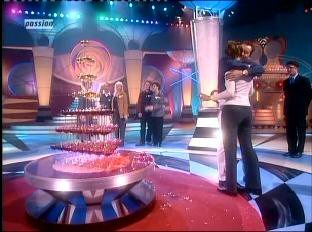 And the smashed glass on the floor suggests it’s all over for this unlucky couple. But it’s not a wasted day, they get to take home the bride and groom outfit they selected before the show, and it looks like they get a short break away. 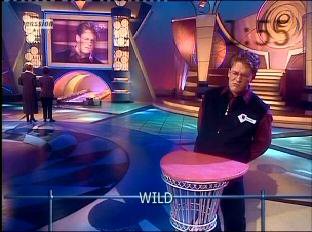 The final two couples battle it out for an advantage in the final round. In another amusing attempt to sap the groom’s dignity after the earlier dancing, he has two minutes to try and communicate emotions facially to his partner watching on a big telly. After two minutes the other couple have a go using the same word list as the previous couple. 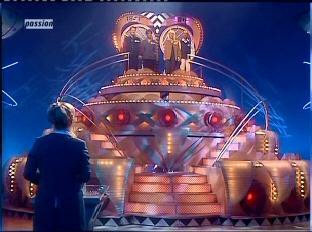 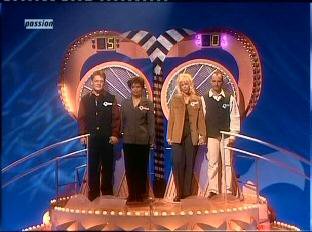 As you can see, one couple has been spotted five points for winning the previous game – represented both as a number and as lights up the side. The winner of this game is the first to twenty points. They’re playing for a dream wedding in the studio later that evening. 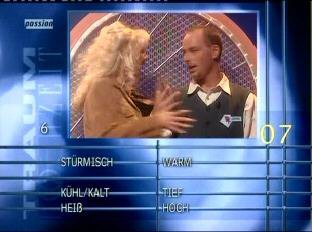 Questions are survey questions. Couples bid as to how many of the ten ten top answers they think they can find within 45 seconds, If they bid highest and complete their bid, they win a point per answer. If they don’t make their contract, the opposing couple win the points instead. 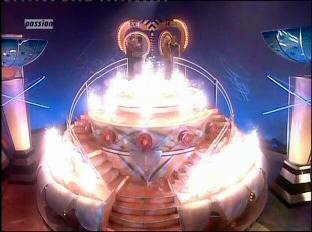 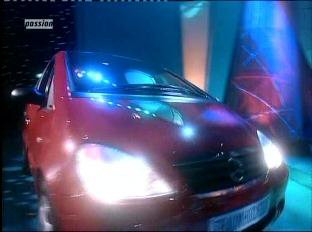 Our winning couple win a Mercedes, and drive off to prepare for their big moment. 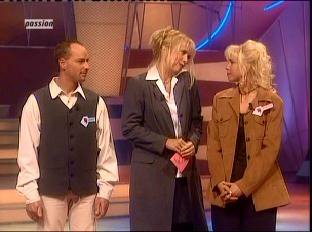 But where there are winners, there are also losers. But it’s not over for this couple, they have the chance to win a very nice sum of money in the consolation game. 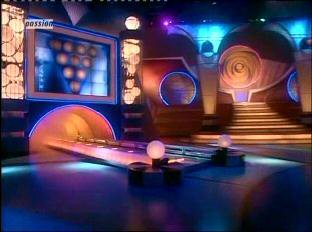 That’s right, it’s time for a bit of bowling. 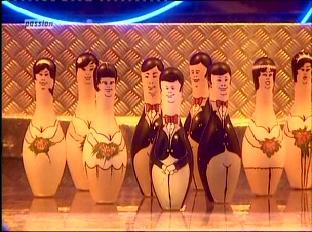 The couple get up to three attempts to knock all ten pins down, and it looks as though two is the maximum bowls either can take. If the couple get a strike they win 30,000 DM (about £10k). If it takes them a second attempt to knock the rest over it’s worth 20,000 DM, and the third and final chance needs using it’s worth 10,000 DM. Unfortunately this couple fail to knock them all over, but they’re given their wedding clothes for their troubles as well as a very impressive looking dinner set for twelve people. 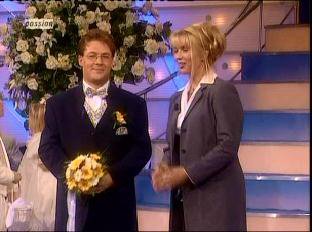 But here’s the climax of the show, a couple are about to get married! 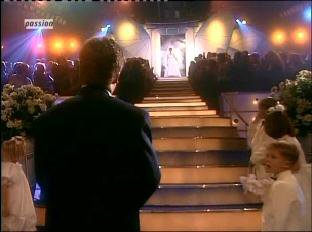 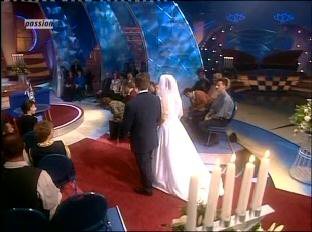 A brief chat with Linda, then it’s time for the ceremony. 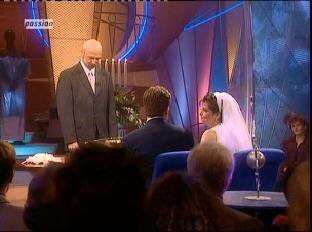 The minister does his business. The couple go to a registry office after the show wedding is over. 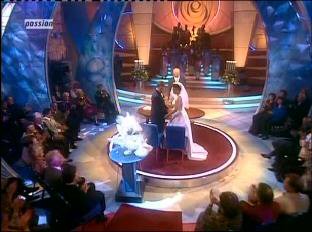 Some well trained doves fly in to complete the moment. 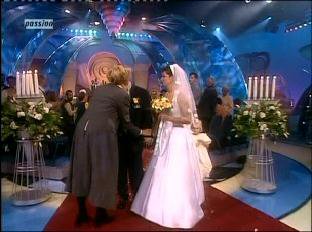 And it’s all done. Linda congratulates the couple with some champagne, and also tells them that they’re off to Brazil for a lovely honeymoon. 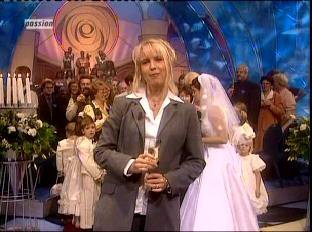 And that’s it for another week!