Now this is very interesting. Before Jacques Antoine became the Godfather of the modern day adventure game, he was churning out popular radio and studio-based formats since the 1960s. In 2006, in a show devised with Denis Mermet, he returned to his roots.

Embarrassingly, we don’t know how well this show was received in France. We do know that after 16 episodes using the following format, it was changed so that in the following fifty episodes, two couples competed against each other. Join us now in our special multimedia presentation of this relationship testing show. 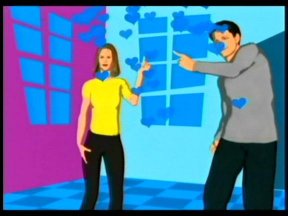 In the next shot, the woman is holding a placard saying it’s an Adventure Line Production.

It’s a good sequence as well, showing many of the ideas contained in the show – quizzing, tough challenges, and lots of hearts.

And lots of trumpets. For your listening pleasure, here’s the kicking theme to download. 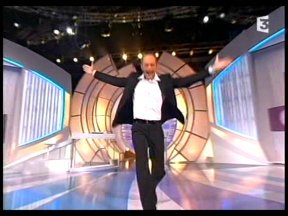 This incredibly camp man skidding on to the set is our host Alain Bouzigues. 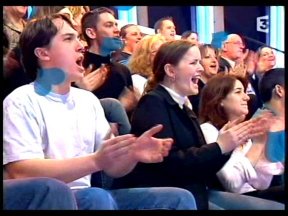 Drôle de Couple is filmed in front of a live studio audience. 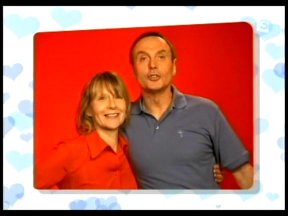 Drôle de Couple translates to “The Odd Couple”. And here are our first odd couple to introduce themselves now!

When selling the format abroad, Adventure Line title it For Better or For Worth. 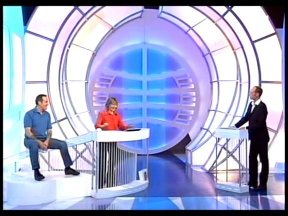 After coming down the giant egg tunnel thing, David and Odette take their places on the podia.

Odette has elected to field the questions, whilst David will be tackling the challenges. 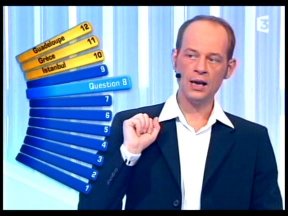 And here’s how the game works: Odette will be facing twelve multiple-choice general knowledge questions. If she answers ten correct, the couple win a “bon voyage” – a good holiday (to Istanbul in this instance). Get eleven correct and they’re off on a “tres bon voyage” – a very good holiday, to Greece presumably. But if she can get all twelve correct, then they’re off on (and the audience joins in at this point) a “TRES TRES BON VOYAGE!” – a very very good holiday. In Guadaloupe.

Everyone is wearing headsets, because it’s the future. 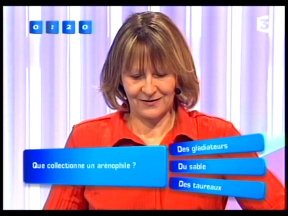 For the first five questions, she gets twenty seconds to answer. After that, it’s thirty seconds, and the questions are a bit more difficult presumably.

She cannot confer with her partner. 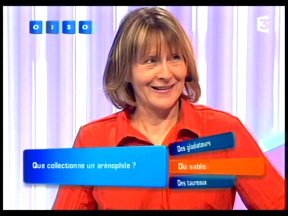 Nice graphical effect here – the answer she selects turns orange, the other two answers rotate back. 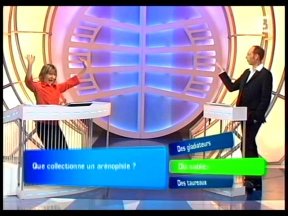 So far, so normal. 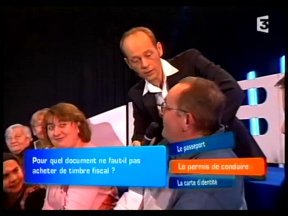 For this response, our host goes into the audience for their opinion… 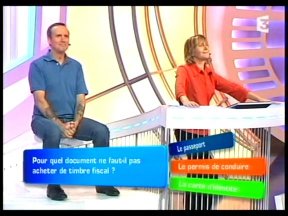 This is accompanied by this tremendous musical sting. 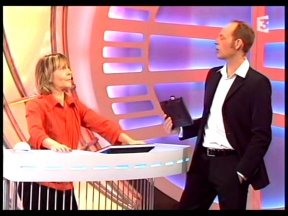 Well, they must fight for survival. David can rescue the game by completing a physical challenge. The difficulty of the challenge is going to depend on how Odette answers the next two questions, both of which are about David, Mr and Mrs style.

Alain reads these questions from a detachable handset, because it’s the future. 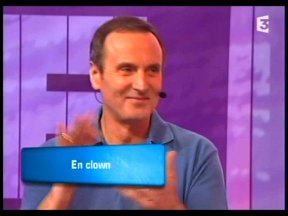 David can only rescue the game – and possibly the relationship – twice, but if he messes up the challenge then the game is over immediately.

Odette gets both of her answers correct here, so that means lots of bonus time for the challenge.

It’s time to bring it on! 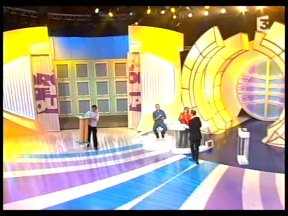 A panel of twelve blinded up windows, and a handbell on a plinth.

It can only be pelmanism! 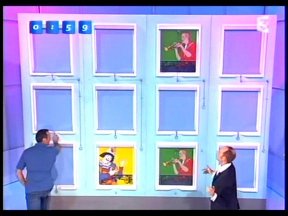 The object is to open up two blinds and to find a matching pair. If he finds one then great – try again. If the windows don’t match, he must run 15 ft away to the hand bell, ping it three times, then run back and try again. Whilst he’s doing that, our host and a stagehand cover the wrong windows back again.

For this, because his partner got both her questions right, he has two minutes and ten seconds to match up all twelve windows.

But as you can see, he’s pretty useless at it. Game over. 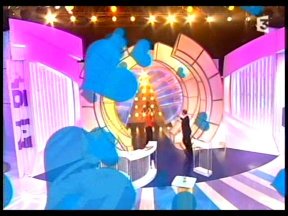 Thanks for playing, but goodbye, back down the egg shaped tunnel they go. 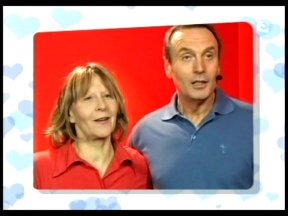 But this is a forty-five minute show, so let’s have another odd couple! 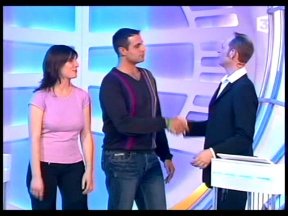 Nicolas will be answering the questions, Cindy will be doing the legwork. 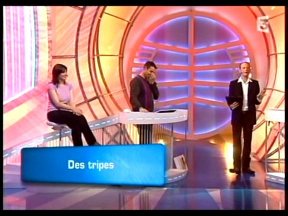 And Nicolas is quite good, as the first question he gets wrong is on question six.

Unfortunately, evidently he doesn’t know his girlfriend very well, as he gets neither of the Cindy questions correct. Oh dear. 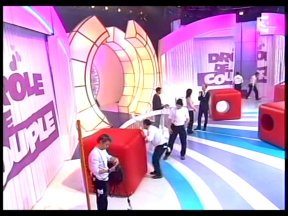 Still, that makes the task difficult, but not impossible. The stage hands are setting up these tunnel cubes. On each one is a letter, which spells out ‘ROME’.

The challenge is for Cindy, attached by a rope, to manouvere the cubes so they spell out the city, then climb through them, and attach the rope to the other post at the other end of the studio. For this, she has 90 seconds. 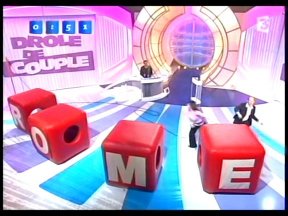 She’s doing quite well, fifty seconds left and the cubes are in the right place. 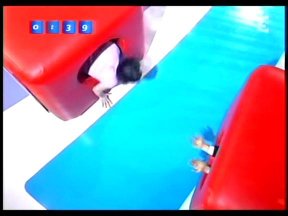 That dismembered set of hands belong to the host, beckoning her on. 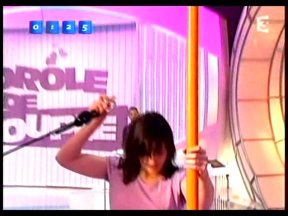 Uh-hoh! This game has got a sting in its tail – the rope is only just long enough to clip onto the other pole, and right now it won’t reach.

What she’ll need to do is to shift the blocks into more of a straight line to give her the required length. 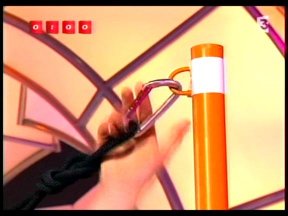 And she makes it. But look at the clock, did she do it in time?

The director shouts over the tannoy – she’s in time!

The challenge appears to count for question seven, so Nicolas is straight onto question eight. 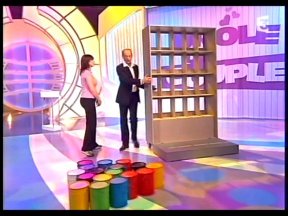 Which he gets wrong. And would you believe it? He gets both the relationship questions wrong as well, so it’s another tough challenge for Cindy.

It’s the paint pot challenge. Here she has a set of shelves divided into a 4×5 grid, and 18 paint pots. Two of the cells will be left blank. 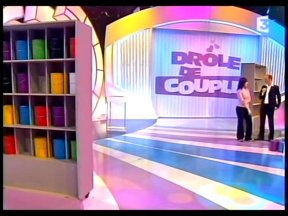 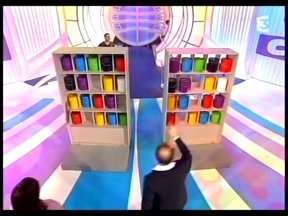 Unfortunately, she didn’t get the bottom two lines right and so it’s goodbye. And so close to a holiday as well.

And that’s all for tonight!

Ryan:
Headless mikes are ALL THE RAGE now in France… as seen on Le Cible and Tout le monde veut prendre sa place.

In fact, Marie Ange Nardi, new host of Le Cible, has complained that she can’t do her bisous because of “les microphones Madonna!”

Brig Bother:
They had headsets on the original Fort Boyard back in 1990. IT worked quite well, surprisingly!

CeleTheRef:
those headsets are in use in many programs in Italy too, but they are pink in order to make them less visible

Chris M. Dickson:
I’m glad he’s just devising new shows. (Heck, I’m just glad he’s still alive.) This looks decent to me, in a “of course I won’t be able to tell without watching it” fashion. Istanbul looks like a meilleur “vacance” to me than Greece, but what do I know?

I’m wracking my brains to try and remember what the last show he devised was. I think it was Intervilles knockoff Trophee Campus in the mid-90s. He didn’t come up with Desert Forges or Carte aux Tresor, despite laying the template the shows followed, I think.

Brig Bother:
Apparently Adventure Line were looking to sell another big adventure style format at a recent tradeshow though, so you know.

In other news, I’m in the audience of the Quebecoise version of “Le Cible” as I’m typing this on the TV. Mildly amusing.