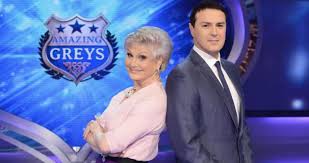 Amazing Greys is the show that pits young people against the elderly in a battle of the ages, each young person tries to beat two of the Amazing Greys out of three in order to earn themselves a £10,000 prize. But it won’t be easy, they might be past their best but these old people are experts in their field. Who will win, youth or experience?

We went and saw the pilot for this back last September where we thought it was alright, albeit nothing standout. They’ve made a couple of changes since then – most noticeably the brilliant Angela Rippon is on board as Paddy’s co-host, I suspect she’ll be cheerleading the Greys with Paddy backing the contestants. Secondly the classical architecture based set of the original has completely disappeared, now looking eerily like the set for the MIA Just 1 Thing filmed a few months previous if the advert is anything to go by (the logo’s changed as well). Finally they’ve made it a touch easier for the contestants – two out of three rather than three out of five, although if Popbitch is to be believed they’ve had to find other ways to help the contestants along because the Greys are too good.

The show hasn’t fared well abroad (in fact it’s been a bit of a failure) so it will be interesting to see if it shines with ITV’s polish. They’ve certainly given it the best possible chance with the Britain’s Got Talent lead-in.