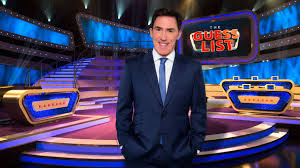 Rob Brydon hosts a new quiz that’s a bit like Blankety Blank but  except not.

We don’t have an awful lot to go on, but it’s certainly a show with a bit of history – it was set to be Mrs Brown’s Celebrities, then when Brendan O’ Carroll decided it wasn’t in the brand’s interests to do it (although also suggested it was funny) it was reversioned with Rob Brydon to become Rob Brydon’s Celebrities, and now we have The Guess List. Tellyspy went and saw the pilot last August and said:

It was a bit like Blankety Blank. Two contestants answering questions, with five celebs (Gary Lineker, Hary Judd, Larry Lamb, Deborah Meaden, Sally Lindsay). One contestant then booted and the remaining plays for crap prizes like a breadmaker, chicken strimmer etc. Round one questions are like ‘In a survey, what is the most annoying thing on a plane…’ And in Round Two, the answers are numerical- celebrities answer and then an average is taken and the contestant has to decide whether its higher or lower. I.e how many arguments do the average couple have a week. It was funny and is a lot better than the BBC’s current Saturday night output. Would be very surprised if it wasn’t commissioned. The entire audience were in hysterics.

We’ll see if many other changes have been made.