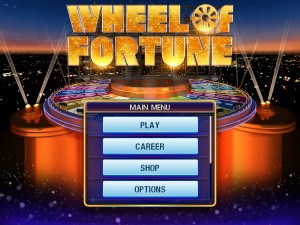 There's no Pat and Vanna, by the way.

I should point out immediately for the hard of common sense that this is a US app you can buy from the UK app store, and so it’s also going to involve a fair amount of US references – the rules, dollars, and probably silly made-up American words phrases for the puzzles such as “addicting”, “very fun”, “turnabout is fair play”,  “winningest”, “I could care less” etc.

Single player mode gives you several options – play against the computer in a mock-up of the show itself (with most of the features from the show – toss-up puzzles, three puzzle rounds with the Jackpot round and mystery wedge round, wild card, million dollar wedge), or you can play toss-up puzzles for as long as you can stand (the quicker you solve, the more money you win. Although the prize reduction per letter seems a little off), or you can play a single speed round, for no discernable reason whatsoever, especially as you don’t seem to get a speed round in TV Show mode which you would have expected, or indeed multiplayer.

Before you begin your single player career, you’re invited to create an avatar from a not-particularly-wide selection of choices of facial wear and hats. If you’re bothered about the lack of selection, you can pay 59p and unlock bigger selections. Or you could buy a Mars Bar or something. You can’t get a preview for these things in the avatar selection menu, you’ve got to trudge all the way to the shop to do it. 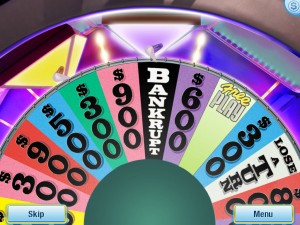 You will see this a lot.

Playing works as you’d expect, swipe your finger across the screen to spin the titular wheel (it doesn’t seem to matter how fast you stroke – it will pay service initially, but apparently the wheel is so frictionless it will just keep running until it gets to the space it intends to hit – you can skip it, but then why spin a wheel in the first place?), probably hit a Bankrupt, but if you don’t you can pick letters and earn cash. After each spin you have the option of spinning again, solving or buying a vowel.

Choosing to solve a puzzle will give you a two-minute window to fill in the blanks correctly. This is far too long, especially as if you’re playing the Speed Round game you’re given it every time you correctly identify a letter, forcing you into a tedious combination of having to press “skip” followed by “are you sure?”. Wouldn’t it be slightly less frustrating and truer to the TV to have a resetting 5-10 second clock that resets every time you input a letter?

For whatever reason, you will hit Bankrupt a lot. This is the opposite of very fun. On medium difficulty, it seemed to be being hit one third of the time. This rather hurts the flow of the game.

Also not very fun is playing against the computer. You will set a new record for hitting a skip button. 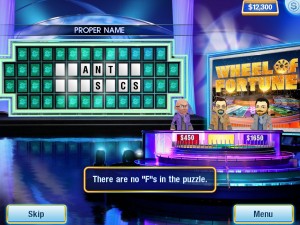 Sort of thank goodness then for multiplayer then – you have the option of connecting iPads and/or playing online (I have not tried these), but this is always going to be more fun with some chums around the same table.

Despite the fact that the iPad screen is almost ten inches, multitouch and should quite easily be able to accomodate three jabbing fingers to act as buzzers, the toss-ups are eliminated in favour of three straight rounds of Wheel. This works fine and is pretty faithful, lack of toss-ups and speed round not withstanding.

1,200 puzzles are featured, and if you get through all of them there are over ten puzzle packs with 180 puzzles in for 59p each, which seems reasonable, although there is no way to create your own puzzles, obviously. It will also download special “theme” weeks on occasion, seven “episodes” of puzzles based on a theme with a new picture behind the contestants, but no other effort in studio decoration.

A version for iPhone and iPod is also avaliable – Wheel of Fortune Platinum. The graphics are less good and there are certain shot changes, but the features are about the same. It will encourage you to buy the HD version if you’re on an iPad, but it will still work.