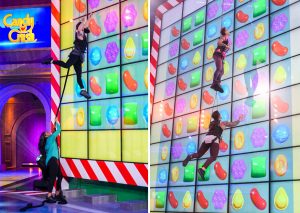 You’ll need to use various dark arts to watch this but Candy Crush, exec produced by Matt Kunitz (Wipeout, Fear Factor et al) and hosted by Mario Lopez (Saved By The Bell, The X Factor) began on CBS last night.

In it four teams of two vie to win $100,000 by crushing the opposition in variants of Candy Crush, the match-3 mobile game, played on, apparently, “the world’s biggest touch screens” – one horizontal and one vertical.

There are four King-sized (ha ha) challenges to choose from and to determine who gets to pick their game there’s a qualifying round where each team will usually have to race to make a certain amount of matches on much smaller screens under the condition of a minor physical obstacle, they might have to launch a giant candy prop into a bucket or make their way through some elastic ropes. The winner of the qualifier gets to choose their challenge and get their score, once a challenge is taken nobody else can choose it.

The big challenges make quite good use of the scale of the set – last night we had standing atop a giant swing using a giant hand on a stick to access the board and one person “attached to a balloon” and had to be guided and pulled down by their partner to get to the right bits of the board, amongst other things.

The two teams who made the most matches go through to the final round where both horizontal and vertical boards are split down the middle. One team member must get a key from the top of the horizontal board to the bottom to release an actual key which unlocks some joysticks to control the height of their partner on the vertical wall, and fifty matches on the vertical wall wins the game. Each team also gets a choice of power-up, with the people who made the most matches qualifying for the final getting first choice.

The set’s great. Mario’s fine. The format offers decisions and makes sense. The show speeds along, not much wasted content.

Really the only thing that lets the show down is that watching people play Candy Crush makes absolutely lousy television. The challenges are decent ideas in the main but they are not visually strong enough to be entertaining on their own merit and so we require a bit of play along and in this case it’s like trying to play Candy Crush but where it cuts away every other second either to a worse position or not at all. You get to watch people play Candy Crush badly (because it’s difficult to see the whole board in the positions the contestants are in) but you can’t spot winning moves to shout at the screen yourself because the direction doesn’t allow it.

One thought on “Candy Crushed”