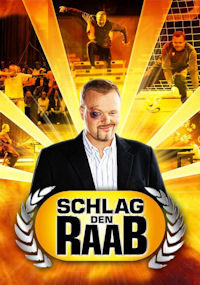 Again, AGAIN, for the fortieth time in fact it’s time for German überstar Stefan Raab to defend his money from people who would try and claim it, and tonight there’s a whopping €1m in the jackpot. And once again we’ll be providing an English language commentary which will run about ten seconds behind your internet stream of choice, and about thirty seconds behind the actual broadcast.

Once again you are encouraged to join in the fun by tweeting with the hashtag #bbsdr or leaving comments on the Youtube stream, either of which will get picked up by us in the studio (we’re not in a studio) and we’ll read out the best things. The show starts at 7:15pm UK time, although the first 45 minutes is picking a contestant, the games start proper around 8pm. Recently it’s tended to finish around midnight, but it’s an open ended live show so it could finish later than that.

This is the stream we will probably be using to commentate on.

We’re limited to broadcasting in four hour bursts, so around 10pm we will need close down our first stream and start a fresh one. This will happen during an ad break or musical interlude, and we will update on here and on Twitter with the new addresses as soon as we can.