[Just a reminder that it’s the Grand Final of Mix It Up Real Good tomorrow night. The likelihood is that previous BSOP Champion Simon Fox walks away with the glass effect trophy, but the more people who turn up the greater number of people have a shot at taking it away from him. Put everything you’ve learnt over the last nine games into effect as it’s 8-Game Mix and starts Sunday at 8pm. Join us for laughs!]

Yeah yeah, someone threw an egg at Simon Cowell or something, well I’ve spent this evening watching some new realigames (TM) that premiered in the US this week. Obviously if you live outside the US you will need to use the dark arts to watch.

Race for the Scene (Thursday, Reelz) is a basically competently produced race competition show where three teams of two complete tasks based on scenes from famous movies originally filmed in places around LA. It’s basically The Movie Game Extreme, except in place of John Barrowman we’ve got Dolph Lundgren, and if you didn’t realise he was Swedish before the show you certainly will pick that up. The show boils down to teams completing not especially interesting challenges (repeat the same not especially interesting thing many times, needle in a haystack tasks and occasionally both at once!) whilst Lundgren shouts encouraging things along the line of “MY SWEDISH GRANDMOTHER WHO IS FROM SWEDEN COULD DO THIS WHILST IN SWEDEN WHICH COINCIDENTALLY WHERE SHE LIVES, IN SWEDEN,” and films he’s been in. The intention is clearly comic and as such  he gets a minimal pass, but it’s also annoying. Each episode is self contained. Overall: meh.

The Hero (Thursdays, TNT) on the other hand is quite good, and might even be very good by the end of the series. In it, Dwayne “The Rock” Johnson puts nine US citizens to the test to see if they’ve got what it takes to be a hero. But who will be THE Hero? That will be down to watching Americans to decide as each week the nine contestants are challenged physically, morally and mentally.

The set-up looks more complex written down than it actually comes across on screen, so bear with me: each week there’s a team Challenge. The nine must select six to take part – it’s in two stages, and beating the Team Challenge will double the time limit for the episode’s Hero Challenge and win a $10k donation to the American Red Cross. HOWEVER, of the six only three will participate in part two of the Team Challenge (and they must decide that between themselves), and of those three the other six will choose who get to play in the Hero Challenge in the War Room after. Before Part one of the Team Challenge The Rock corners one of the three people not chosen to participate and offers them a cash temptation (decently large as well) to make the Team Challenge harder. Nobody amongst the group will know who the offer was made to and whether they took the money, but America will. The Hero Challenge each week is played for $50,000, and if the chosen hero succeeds they can add it to the final prize pot (starting at $250k) or keep the money themselves, in the knowledge that only America will know what actually happened. At the end of the series America will vote on who wins. 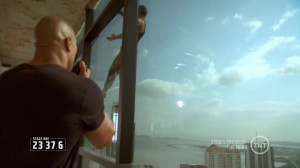 And I like it, with a few reservations. first of all The Rock is just terrific – he loves the camera but that’s OK as the camera clearly loves him, he manages to get “yeah I’m in charge here, and we’re gonna have a real good time” across with just a glance to camera and a grin. Even when he’s being a bit cheesy with his “yeah, this is what a hero IS,” he somehow manages to get away with it.

The action challenges are right side of decent, certainly the first episode were not all that devious but they were acceptably exciting, and the Hero Challenge was excellently Fort Boyard-esque (the Dark Labyrinth with some added spiders with remembering a long code with also having to get out within the time as well) and the moral choices were interesting, I wondered if the temptations might be too high (the Hero Challenges are worth $50k but you’re only 1-in-9 to win the big pot at the end so taking them is probably +EV. But IS IT?) but this has led to intriguing meta-bitching in the confessionals. I’d be interested to know what the contestants thought about the edit. There also appears to be live opinions from Twitter overlaid by the channel Million Pound Drop-style. Other than the temptation levels, I think my only other real gripe is the license used in the challenge editing to make it look closer than it probably was although that’s hardly a killer (contestant goes down a lengthy mineshaft, lengthy mineshaft element edited out on the return for purposes).

Keep an eye on this one, I think it’s got some potential.

6 thoughts on “Holding Out For The Hero”