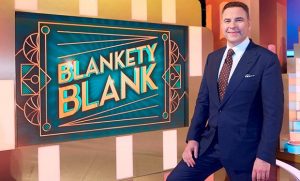 David Walliams returns with an art-deco reboot (well, one-off with a clear view to a series) of Blankety Blank, no doubt helped by a successful reboot of Match Game in the US this year.

Panellists are Joe Lycett, Anne Robinson, The Chuckle Brothers, Lesley Joseph, Louis Walsh and Brooke Vincent (who’s the only one unknown to me) – actually it’s a fun sounding line-up although one that’s clearly geared towards a slightly older audience. There’s likely to be a lot of added mucking about to fill the hour, it used to fill a 30-40 minute slot with two games, two supermatches and an effective big prize final and it will have sixty here (the recent Match Game had effectively one game and a final as a self-contained 30 minutes times two).

We enjoy Blankety Blank and especially enjoyed it on Walliams’ 24 Hour Panel People, but that was mainly down to Paul O’ Grady whinging about how much he didn’t like hosting it full time for about an hour. Whether this will hit those heights remains to be seen. The set looks tiny from the advert.