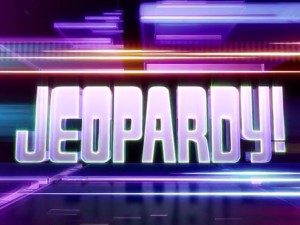 Compatable with iPad, iOS 3.2 or later

For the true all-American early evening gameshow “experience”, you should go and play Wheel of Fortune HD first followed by a game of this.

Most of the same criticisms apply – it looks and feels quite slick, you can buy things to makes to make your avatar look pretty with actual real money if you’d like (I don’t think buying something from the Wheel app will unlock the style in the Jeopardy! one, regrettably) and more clue packs (which come with 700 clues each, which seeing as a game uses 61 is enough for 11-and-a-bit new games). Also, being an American show, the questions are more US-centric, although two-thirds of the categories should be fine for Westerners. 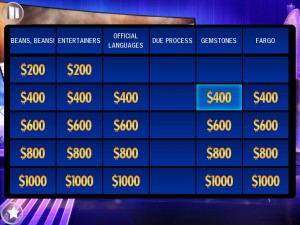 You can play against the computer or with chums. Playing against the computer is pretty simple, first of all you get to sign your name (like they do on the telly!) a clue is given and you have about seven seconds to decide if you’re going to answer it or not. If you choose to, you’ll get three possible answers (questions, whatever), repeat until all thrity clues are done. Then do it all over again.

If you get the question correct you might hit a Daily Double, then you get to make a wager, which you can do by tapping a button in increments of $100 (tedious) or just go fro a true Daily Double (exciting yet excessive). Subtlety in wagering strategy destroyed in Final Jeopardy, which uses exactly the same system (so hope you don’t want to gamble 10,000k without it being your entire wodge, otherwise you might be there a while). Wagering questions are again multiple choice.

The material is fine (most of it comes from the actual show, by the looks of things, so if you want to save yourself a few bob…) but what is a fast paced and entertaining quiz on TV is a bit of a tappy plod-a-thon to play on an iPad, it feels like you’re having to tap just a few too many times between clues for comfort, and if you get it wrong you ahve to wait for the computer to decide if it’s going to answer or not, and you’d just wish it would just get on with it. 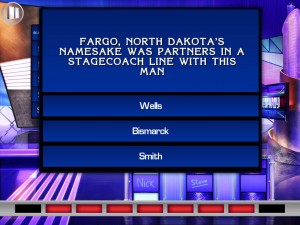 If you'd like to know the question to this answer, look it up.

However, most things are more fun with others. Jeopardy gives you the option to connect iPhones/iPads (it is unlikely you will play this) or there’s a Pass the Pad mode, where the fast paced quiz becomes a complete slogathon where every player gets to see every question and choose to respond. It’s not so much Jeopardy! as a very slow 61-question multiple choice quiz with occasional wagering element. If you thought the game was slow with one player, try multiplying by two or three.

Again, you have a ten inch screeen here, you have a machine capable of multi-touching, how hard can it be to turn the screen into a buzzer system? That might have made it tremendous, as it is it’s an opportunity much missed.

It’s got both sound and set from the show, although it’s a shame that the boards aren’t cleverly set so the categories make a sort of witty joke like they sometimes do on telly, here it just looks like the categories are chosen at random from a decently sized bank.

Again, given what a great fit this would have been for social play (if you do play with several iPads connecting, do let us know what it’s like) but the lack of a minute’s extra thinking time about what the machine is capable of and how it is most likely to be used lets the app down rather a lot.

An iPhone version of the game, Jeopardy Platinum, also exists and appears to be basically the same but less HD-y.

One thought on “iPod: Jeopardy HD”