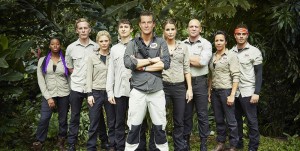 An unusual timeslot for a celebrity reality show, but hey, why not.

It’s Celebrity Camping basically by the sounds of it, they’ll have to make their own shelter and find their own food in the Costa Rican jungle all under the watchful eye of survival superstar Bear Grylls. One by one they’ll get kicked off somehow until three remain in the final and a Mission Survivor is crowned.

The title remains a bit embarrassing but the show might be fun. Alternatively The Million Pound Drop‘s on at 8pm.